Words to the Church from Another Time of Pandemic and Racism

The Rev. Francis Grimké’s thoughts from over a century ago are just as relevant during our current COVID-19 crisis and ongoing pleas for racial justice.

In the middle of the influenza outbreak in 1918, the pastor of the Fifteenth Street Presbyterian Church in Washington, D.C., delivered an address that still speaks to us today.

The Rev. Francis Grimké first talked about refraining from public worship when gathering will put people in danger. He used language that sounds as if it was written yesterday: “Another thing that has impressed me, in connection with this epidemic, is the fact that conditions may arise in a community which justify the extraordinary exercise of powers that would not be tolerated under ordinary circumstances. This extraordinary exercise of power was resorted to by the Commissioners in closing up the theaters, schools, churches, in forbidding all gatherings of any considerable number of people indoors and outdoors, and in restricting the numbers who should be present even at funerals. . . . There has been considerable grumbling, I know, on the part of some, particularly in regard to the closing of the churches. It seems to me, however, in a matter like this it is always wise to submit to such restrictions for the time being. . . . The fact that the churches were places of religious gathering, and the others not, would not affect in the least the health question involved. If avoiding crowds lessens the danger of being infected, it was wise to take the precaution and not needlessly run in danger, and expect God to protect us. And so, anxious as I have been to resume work, I have waited patiently until the order was lifted. I started to worry at first, as it seemed to upset all of our plans for the fall work; but I soon recovered my composure. I said to myself, Why worry? God knows what He is doing. His work isn't going to suffer. It will rather be a help to it in the end. Out of it, I believe, great good is coming. All the churches, as well as the community at large, are going to be the stronger and better for this season of distress through which we have been passing.”

Second, Grimké spoke about racism: “During these terrible weeks, while the epidemic raged, God has been trying in a very pronouncedly conspicuously and vigorous way, to beat a little sense into the white man's head; has been trying to show him the folly of the empty conceit of his vaunted race superiority, by dealing with him just as he dealt with the peoples of darker hue.”

True words, both then and now.

Grimké was a remarkable leader whose works were later collected into three volumes edited by one of the leading North American church historians, Carter Woodson, whose home is not far from Fifteenth Street Presbyterian. Both sites can be visited today, along with the nearby home of civil rights leader Mary McCleod Bethune and the historic Metropolitan AME Church (see tour route below). 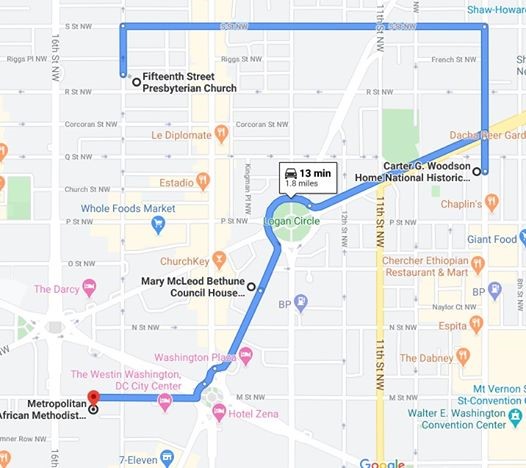 Anti-Racism in the Renewing of Christian Worship.
May God give us grace and strength to resist lies, arrogance, injustice, racism, and oppression in all forms. In worship, we are called to confess sin, to lament brokenness, and to pray for the end of these travesties, even as we are called to preach and celebrate sacramentally the gospel of Jesus Christ—in which power is made perfect in weakness, in which each person and culture is cherished as God’s gift, in which our hope is based on the life, death, resurrection, and continuing ministry of our ascended Lord, Jesus Christ. We long for a seamless connection between faithful public worship and vital Christian witness in every sector of society and in every cultural context.
Read more »

Emmett G. Price III on Racial Reconciliation Resources for Congregations
Learning about diversity among Christians is a good way to embrace the ministry of reconciliation entrusted to us by God.
Read more »