interviews with a variety of Protestant North American Latino worship leaders, musicians, and pastors, presented in both Spanish with English translation.

The goal of these interviews is to strengthen the ties that bind us together as part of Christ’s body, within and  across various ethnic, denominational, and geographical lines. A crucial step in strengthening ties is that of increasing understanding—and that begins by listening.

This listening is especially important with respect to the Latino community in North America for several reasons:

All of this serves as an urgent invitation to listening and learning. Ultimately, this learning is best served by several kinds of sources:  documentary films and newspaper articles, sociological studies and histories, and (best of all) many face-to-face conversations and experiences of worshiping together, in both Latino congregations and multi-cultural assemblies.

As the number of videos, internet resources, and academic studies of Latino Christianity continues to grow, these interviews make one modest, but still significant contribution: “in their own words testimonies” of a variety of leaders, whose unique insights help us feel the pulse of Latino communities. 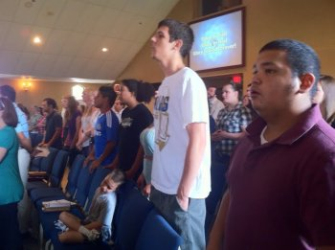 The Future of Latino Protestants in America
Latino Protestantism is growing in the United States due to a combination of immigration, birth rates, and conversion. This expanding stream of American Christianity will foster shifts in the liturgy and worship of churches in unexpected ways.
Read more »