Taka Ashida on Worshiping with the Christian Year

Taka Ashida describes why he recommends worshiping with the Christian Year. 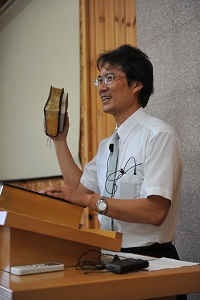 Takayuki “Taka” Ashida is pastor of Shin Urayasu Tokyo Bay Reformed Church in Japan. Like nearby Tokyo Disneyland, the church is built on land reclaimed from Tokyo Bay. Ashida is also secretary of the International Ecumenism and Mission Cooperation Committee in the Reformed Church in Japan (RCJ). In this edited email conversation from August 2013, he describes why he recommends worshiping with the Christian Year.

Where did you learn about the cycle of the Christian Year, also called the liturgical calendar?

When I studied for my Master of Theology degree at Calvin Theological Seminary, my family and I lived in Grand Rapids, Michigan. I did my thesis on developing an intergenerational model of worship for the Reformed Church in Japan. We attended Woodlawn Christian Reformed Church, and it was the first time my family and I experienced church life according to the Christian Year. I also learned about the importance and effectiveness of using the Christian Year in worship classes at the seminary.

What made you interested in using the liturgical calendar to plan worship?

What first steps did you take to introduce Shin Urayasu Reformed Church to the Christian Year?

My family and I moved from Grand Rapids to the church in the Tokyo Bay area in June of 2006. At that time, the number of participants in the Sunday worship services was about 20 people, including children. The church had been established several years before we came but was still in a sort of church planting ministry phase. Because the church was small and young and trying to revitalize, it was not so difficult for me to introduce and start exemplifying the Christian Year. I became the pastor of the church in June of 2006, and we started using the Christian Year calendar in Advent of the same year. Before we started, I explained several times about the effectiveness and helpfulness of it in revitalizing the Sunday worship services.

What faith formation benefits have you experienced from using the liturgical calendar to plan worship?

If we use the Christian Year Calendar, we can rehearse, exemplify, and realize the reality of the great story of salvation by the Triune God. We notice that our God planned the great salvation through his Son Jesus Christ, and that his plan was very deliberate. Year by year we can reconfirm salvation given by the Father, the Son, and the Holy Spirit by using the liturgical calendar.

Even for mature Christians, the Christian Year is useful. Because they can experience “the great and magnificent Triune God’s drama of salvation” year after year, their spiritual lives and physical Christian lives are transformed. Between Pentecost and Advent, over and over again, we are learning about and becoming equipped to live as servants of the Lord. And then sanctification by the Holy Spirit is developed.

Do you notice any other benefits?

Japan is not a Christian country. The Christian population is less than one percent of the whole population. Many seekers and newcomers do not know the great plan of salvation offered by the Triune God. Therefore, using the Christian Year is very effective in evangelism. I think using the liturgical calendar was quite effective in our situation. When I came to Shin Urayasu Reformed Church, the number of attendance was about 20— now it is 60 or more, including children.

Epiphany Resource Guide
An index of resources and tips for planning worship for Epiphany.
Read more »