Roman Williams on Peeling Back Layers of Meaning in Church Life

Roman Williams on Peeling Back Layers of Meaning in Church Life

Roman Williams is a former pastor and church planter who now teaches sociology at Calvin College in Grand Rapids, Michigan. He specializes in using visual methods to research the sociology of religion.

In this edited interview, based on conversations in December 2013 and January 2014, he talks about how two techniques, photo elicitation and photovoice, offer valuable insights for the church’s ministry in the world.

You call yourself a visual sociologist of religion. What does that mean?

I’m a sociologist, and my area of specialization is the sociology of religion. I like visual research methods that use images to cultivate a conversation. In quantitative numerical analysis and qualitative standardized interviewing, all the power belongs to the interviewer. You’re the expert and the interviewees are just the raw gold or coal that you’ll mine and turn into something useful.

But when you put a camera in someone’s hand and ask them to take pictures of whatever interests them, the distance between you disappears. You become co-investigators. People have varying abilities in expressing themselves. Cameras add an extra tool for telling their stories. In visual research, I don’t ask everyone the same rehearsed questions, because their pictures provide answers to questions I’d never think to ask.

Is there a name for the image-based research you do?

Photo elicitation (PE) is most often done one-on-one. Interviewers can do PE by inserting the same image into conversations and asking everyone to comment on it. I prefer the PE method of asking people to take photos or videos that they choose. Photovoice (PV) bridges research and activism. It’s intended to give a group of people, usually marginalized people, an avenue to voice their concerns, record their community strengths and weaknesses and promote critical dialogue so they can reach policymakers.

Anthropologists began using PE in the 1950s, and sociologists in general began talking about PV in the early 1990s—but it’s cutting edge to use either method in the sociology of religion.

Who got you interested in using image-based research to study the sociology of religion?

My mentor is Nancy Ammerman. In grad school at Boston University, I was a co-investigator on her Spiritual Narratives in Everyday Life project. One result of that project was her book Sacred Stories, Spiritual Tribes: Finding Religion in Everyday Life. I remember talking with a Baptist African American married woman who was an executive buyer in a clothes company. She said she should have taken a photo of her office, because it has so many images of her cottage on the ocean. She said, “At work I’m always running, running, running, like a gerbil on a wheel. The ocean is where I unwind and get close to God.” Now if you and I would walk into her office, we’d see some of the chaos she talked about. We’d see that she likes the beach. But we wouldn’t see God. It’s only by hearing about the meaning behind those images that we can really understand what’s going on in people’s lives.

How would you like to apply these tools to churches?

I think PE and PV are more engaging than other research methods. They can help our churches examine our taken-for-granted everyday lives and peel back the many layers of meaning. Understanding the nuances helps church leaders make better decisions.

I’d like to adapt PV to congregational self-study purposes because it’s the best way to get church members talking amongst themselves. One of my dreams is to do a project with youth and families from churches in different kinds of neighborhoods. You could ask them to take photos of places where they feel safe or unsafe, welcome or unwelcome, places where God is at work or not at work. Then bring everyone around tables to talk. Maybe they’d want to go out again to take more photos to better capture what they’re trying to represent. You could create an art installation, or a photo show that goes around to all the churches.

Can churches contact you to brainstorm using photos to do research, start worship conversations or bring about change?

Yes, I invite people to email me at roman.williams@calvin.edu. I can help you decide who in your church you want to do visual research with—kids, random people from throughout the church, only disgruntled older members, only men, a certain social class…Researchers say worship style has a lot to do with social class. Maybe we could design a PE project to learn church members’ taste in clothing, food, music, movement and worship. It would be great to do a PE project in advance of a sermon series on where God is at work in the world or where worship happens.

You could do an object elicitation by walking through the church property, talking about the photographs on the walls and all the artifacts to find their meanings in the church’s life. I remember a church near Boston that had an enormous bell on a brick pedestal outside on the lawn. No one I asked knew why. I found a local historian who said the bell was what was left when the church burned to the ground in the late 1800s. Every church has broken chains of information from one generation to the next. Asking about the objects, artifacts and old photos can help people of faith touch on really deep practices and identities.

Where can people learn more about visual research by sociologists of religion?

I’m editing Seeing Religion: Toward a Visual Sociology of Religion. I’m writing the introductory and concluding chapters. I’ve recruited folks to write nine other chapters, including Mark Mulder on using maps and overlays with data and Katie Day on using photography to help people understand their churches in comparison and context. Routledge is scheduled to publish the book in 2015. 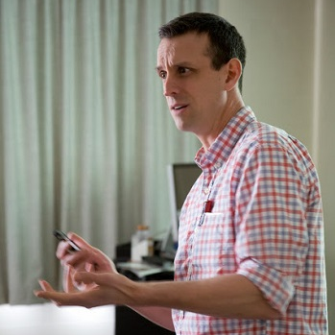