Introducing the worship song “Come, Holy Ghost / Be Not Afraid” by Bruce Benedict and Ray Mills.

In this episode of Renewed, Greg Scheer introduces a worship song that is truly “Ancient-Future” as it is rooted in the past, but looks forward to the future. The original text of “Come, Holy Ghost” was written in 8th century Germany and given a new tune and refrain in 21st century Indianapolis.

Listen to the original recording of “Come, Holy Ghost” with Bruce Benedict singing.

Explore different versions of the music, including piano, choir, and string arrangements.

See the song’s entry at Hymnary.org. 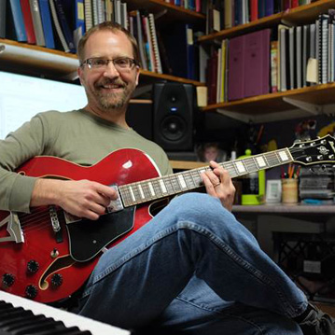 Renewed: Ready My Heart
What if we thought about Christ’s birth as an ongoing reality, rather than a one-time event? That’s just what Lois Shuford’s haunting Advent song “Ready My Heart” does: it helps us prepare our hearts for Christ to dwell in us every day.
Read more »

Renewed: Mary’s Song (Our King of Peace)
Wendell Kimbrough’s setting of Mary’s Song captures the wonder, fear, and obedience of Mary’s response to Gabriel’s message. The song is a perfect fit for Advent, Christmas, and Lessons and Carols services.
Read more »

Songs for Ascension: Looking Beyond Your Hymnal
Breakout session by Greg Scheer from With a Shout, a day-long conference held in 2006 exploring the meaning of the Ascension culminated in a community worship service at Woodlawn CRC.
Read more »