Pandemics and Public Worship Throughout History

As the pandemic COVID-19 brings isolation and unprecedented challenges to congregations around the world, it can be of great comfort to reflect and learn about how Christian churches have responded to epidemics and pandemics throughout history.

This resource page highlights articles and primary sources from several online resources that tell stories of the Christian church and epidemics—stories filled with both despair and hope, both agonizing pain and inspiring pastoral innovations. What a gift it is to have resourceful historians, editors, and writers making this material available across the web! We are happy to help readers find this good work and look forward to updating this page with additional materials over time.

As you read through the historical timeline, you may find several key themes that emerge from these materials:

One additional benefit of this learning is that each of us is de-centered. Christian wisdom has emerged across many centuries. It is displayed in many different denominational traditions. And it takes shape in a stunning variety of cultural contexts. A beautiful act of Christian humility is to realize how much we have to learn from believers in historical and cultural contexts far different from our own.

We also want to thank respondent John Ross for his helpful point: "In the case of most of the epidemics listed below, Christians simply had not discovered or understood the underlying science of transmission and dispersal of disease as we do today." We are grateful for the insights of science to inform us as we discern the ways in which we express our love toward each other and the world God loves.

The Plague of Cyprian erupted in Ethiopia around Easter of 250 CE. It reached Rome in the following year eventually spreading to Greece and further east to Syria. The plague lasted nearly 20 years and, at its height, reportedly killed as many as 5,000 people per day in Rome. Contributing to the rapid spread of sickness and death was the constant warfare confronting the empire due to a series of attacks on the frontiers: Germanic tribes invading Gaul and Parthians attacking Mesopotamia. Periods of drought, floods and famine exhausted the populations while the emperorship was rocked with turmoil. St. Cyprian bishop of Carthage, remarked that it appeared as if the world was at an end... The outbreak was named after Cyprian as his first-hand observations of the illness largely form the basis for what the world would come to know about the crisis. He wrote about the incident in stark detail in his work De Mortalitate (“On Mortality”).

Dionysius, during the second great epidemic around 260 CE, [writes]: “Most of our brother Christians showed unbounded love and loyalty, never sparing themselves and thinking only of one another… nursing and curing others.” Later in the letter, he described that those without this kind of care fared much worst. He writes that, “at the first onset of the disease, [the healthy] pushed the sick away and fled from their dearest…hoping to avert the spread and contagion of the fatal disease.”

Catherine of Siena was born in 1347. That year, according to writer Charles L. Mee, Jr., “in all likelihood, a flea riding on the hide of a black rat entered the Italian port of Messina.… The flea had a gut full of the bacillus Yersinia pestis.” With that rat, flea, and bacillus, came the most feared plague on record. In just three years, 1348 to 1350, the Black Death killed more than one-third of the entire population between Iceland and India. Remarkably, the young Catherine survived the onslaught. Catherine of Siena lived—and helped others—during the most devastating plague in human history.

Julian of Norwich lived in a tumultuous time, the Black Death was raging in Europe. The first such plague occurred when she was only six years old. The road beside Saint Julian's Church was used to remove the bodies of the dead from subsequent plagues, and she probably heard the carts rumble by. The Hundred Years' War between England and France had begun in 1337, as did the papal schism in which two popes each suspected the other of being the Antichrist. Famine and cattle disease contributed to the forces that caused the Peasants' Revolt, and John Wycliff and his followers, the Lollards, were declared heretics. Some were burned and buried near Julian's church cell. She must have been aware of the suffering of the time. In such tumultuous time, Julian saw visions from God and recorded them as his message to her fellow Christians.

Read also the book Laughing at the Devil: Seeing the World with Julian of Norwich by Amy Laura Hall

Zwingli was on a mineral-springs vacation in August, 1519, when the Black Death broke out in Zurich. Though weak already from exhausting work, he hurried back to his city to minister to victims. Before long he himself caught the disease and seemed likely to perish. But his work not yet done; Zwingli recovered. His famous “plague hymn” recounts his sense of trust and then his joy at regaining health.

In August of 1527 the plague struck Wittenberg and numerous people fled in fear of their lives. Martin Luther and his wife Katharina, who was pregnant at the time, remained in their beloved city in order to treat the infected. Despite the calls for him to flee Wittenberg with his family, Luther’s mind was set on helping the infected. He inevitably came to the conclusion that it was not inherently wrong for one to so value their life that they did not remain, but only so long as the sick had someone of greater faith than they to care for them.

During this time of immense challenge and uncertainty, Luther wrote a letter to Johann Hess and his fellow Christians in Breslau, titled "Whether One May Flee from a Deadly Plague." Visit here to view the full translation of the letter.

—Grayson Gilbert, "Martin Luther and His Incredible Response to the Black Plague," Patheos

During Calvin’s ministry, Geneva was terrorized by the plague on five occasions. During the first outbreak, in 1542, Calvin personally led visitations into plague-infected homes. Knowing that this effort likely carried a death sentence, the city fathers intervened to stop him because of their conviction that his leadership was indispensable. The pastors continued this heroic effort under Calvin’s guidance, and they recounted the joy of multiple conversions. Many pastors lost their lives in this cause. Unknown to many, Calvin privately continued his own pastoral care in Geneva and other cities where the plague raged.

Jonathan Edwards, among his first acts as President of the College of New Jersey (Princeton), preached a New Year’s Sermon in 1758 on Jeremiah 28:16 ("This year thou shalt die"), while Princeton, New Jersey was in the midst of a smallpox epidemic. He later received an inoculation, which led to his death two months later. Once Edwards had spoken in his sermon titled, "The Preciousness of Time and the Importance of Redeeming It" (1734): "Time ought to be esteemed by us very precious, because we are uncertain of its continuance. We know that it is very short, but we know not how short..."

—"When the Plague Comes: Pastoral Compassion in Centuries Past," Log College Press

As a young village preacher, Charles Spurgeon admired the Puritan ministers who stayed behind to care for the sick and dying during the Great Plague of London in 1665. In [the] fall [of] 1854, the newly called pastor of London’s New Park Street Chapel pastored the congregation amid a major cholera outbreak in the Broad Street neighborhood just across the river. How did Spurgeon respond? 1) He prioritized local ministry. 2) He adjusted his meetings, but continued meeting. 3) He cared for the sick. 4) He was open to new evangelistic opportunities. 5) He entrusted his life to God.

For the autobiography of C. H. Spurgeon, visit this website.

During this epidemic in which the state prohibited social and religious gatherings, Christian Reformed Church's magazine The Banner called its readers to “pray earnestly that the scourge may soon be removed” so that churches could reopen. It also suggested “lessons from this appointment of Providence” to learn:

—"The Flu Epidemic of 1918-1919 and 'Churchless Sunday,'" The Heritage Hall of Calvin University

In 1948, C. S. Lewis... wrote an essay titled, "On Living in an Atomic Age." In it, he talks about the anxiety that the majority of people in his day had regarding the threat of nuclear war... It was a serious, legitimate concern [in his time]. Lewis wrote:

In one way we think a great deal too much of the atomic bomb. "How are we to live in an atomic age?" I am tempted to reply: "Why, as you would have lived in the sixteenth century when the plague visited London almost every year, or as you would have lived in a Viking age when raiders from Scandinavia might land and cut your throat any night; or indeed, as you are already living in an age of cancer, an age of syphilis, an age of paralysis, an age of air raids, an age of railway accidents, an age of motor accidents." In other words, do not let us begin by exaggerating the novelty of our situation...

This is the first point to be made: and the first action to be taken is to pull ourselves together. If we are all going to be destroyed by an atomic bomb, let that bomb when it comes find us doing sensible and human things—praying, working, teaching, reading, listening to music, bathing the children, playing tennis, chatting to our friends over a pint and a game of darts—not huddled together like frightened sheep and thinking about bombs. They may break our bodies (a microbe can do that) but they need not dominate our minds.

During the global outbreak of Ebola in 2015, Archimandrite Themistocles Adamopoulos was among his people in Sierra Leon, a epicenter of the outbreak. In this report he writes: "People from abroad constantly call me and ask me: 'Father, why don’t you leave and save yourself from a potential infection and even death?' The answer is very simple. For the present time God has placed me here in West Africa. As the shepherd of the flock in Sierra Leone, it is my duty to stay with them, to care for them, to instruct them, to console them, to guide them and to protect them from an evil that kills without pity. Furthermore our Lord Jesus Christ instructs the Christian shepherd not to abandon the sheep when danger comes. It is only the hireling who abandons the sheep in moments of crisis (John 10:12-13). We are relying on Christ’s protection. 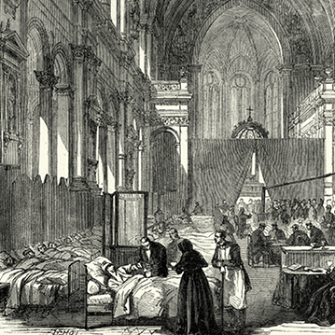