Kendra Buckwalter Smith is the worship coordinator at Pittsburgh Theological Seminary in Pittsburgh, Pennsylvania. PTS has chapel four days a week, and Smith meets with every person or team that plans a chapel service. 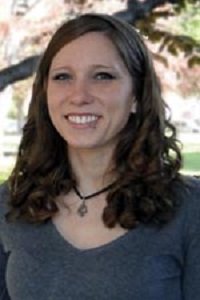 As part of a recent Vital Worship grant from Calvin Institute of Christian Worship, Smith helped the PTS community push beyond the “traditional versus contemporary” worship split, in part by using global worship resources. In this edited interview, based on email conversations in summer 2014, she talks about the challenge of using global worship resources with authenticity.

What’s the benefit of pushing seminarians—or any worshipers—beyond their comfort zones?

Pushing students out of their comfort zones from time to time has a pedagogical purpose. Seminary is one of the few times that students will be able to engage unfamiliar worship forms. We want them to graduate with a broader perspective on worship than when they came in. This happens most effectively in the very act of worshiping the Triune God. Getting worshipers out of their comfort zones creates space to recognize and engage the discomfort inherent in any confrontation of the Divine—even those encounters that are familiar to the point of habituation. Experiencing unfamiliar forms of worship prepares us to return to the familiar with fresh perspective that reinvigorates our experience of God in our worship.

What are the main challenges in using global music and global resources in worship?

We discovered they can be somewhat difficult to find and are almost always difficult to authentically use. You have to balance stylistic authenticity with a congregation’s particular identities and cultural contexts. That often means putting aside aspects of our own culturally formed identities to engage something new. We don’t want to create a caricature of another culture or co-opt worship practices into something they were never meant to be, just so they look and feel the way we want them to be. No matter the origin of the liturgical practice, the goal is always to authentically worship God in spirit and in truth. Global and multicultural resources can reveal new ways of understanding and relating to God that lead to deeper relationship with him.

So how do you balance authenticity and identity?

Global resources need to be introduced sensitively and hospitably. It’s helpful to do a little research and include bulletin notes about a liturgical element’s cultural background and practice and how it connects to our own context. We explain how this potentially unfamiliar element informs the entire worship service theologically. We encourage worship leaders to recognize moments that may be uncomfortable, and therefore extend a carefully planned verbal invitation to the congregation.

Can you give an example?

In the first service led by the global and multicultural resources team, we included this in the worship bulletin notes: Our opening song and refrain today, “Salaam” (Arabic for “peace”), was written by an Egyptian Presbyterian, Manal Samir. It is a profound expression of unity to join with Arabic Christians to sing of peace in their tongue. The music has a water-and-oil character—the subtle, legato melody flows on top of the accompaniment’s steady rhythm.

This note provided background, answered “why this song?” and “why a different language?” and pointed to how congregants might experience the song in our worship. We used the tune in the prelude. Then a cantor sang the refrain a few times, and congregants joined in as they felt comfortable. We sang the whole song as an opening song. This sung prayer for peace grew organically out of the music that gathered us to worship. Later, during each brief prayers of the people section, the cantor would begin singing the refrain so that the prayer for peace grew organically out of our spoken prayers.

What’s an example of a non-music global worship resource that worked well?

C. Michael Hawn visited to lead global music workshops and discussions and one chapel service. In that bulletin we printed the Masai version of the Nicene Creed. We put it under the heading, “An African Confession of Faith.” We didn’t refer to it as a creed, because that’s a strong term for a designated statement of shared belief within a particular tradition or religious community—something that “shouldn’t be messed with.” We tend to associate the term confession more with testimony, something more personal and open to variance and cultural context. Referring to the Masai Creed as a confession made it a little easier to swallow. We often fail to recognize, however, that all our creeds are very much contextualized to a particular cultural understanding.

How did Michael use the Masai Creed in his chapel service?

In his brief sermon, he explained why, after stating that Jesus was nailed to the cross and died, the creed states, “He lay buried, but the hyenas did not find his body.” The Masai people do not bury their dead. They are nomadic and are not tied to a particular location, so they leave their deceased in the wilderness to be devoured by hyenas. It’s very different from our own context of burying our deceased loved ones in a cemetery or churchyard. Talking about hyenas in a creed seems barbaric in a Western worship context, but Michael’s explanation helped us see, with the Masai, that Christ’s bodily resurrection and ascension are incredible. He asked us to wonder how we’d understand Christ’s and our own resurrections had Jesus’ body been destroyed by wild animals.

Note that he explained the creed within the sermon, rather than saying, “Here’s what you should know about what we’ll do next.” He didn’t “give stage directions” that abruptly pulled the congregation out of the narrative worship experience. Instead he proclaimed the gospel’s good news, illustrating it with information to help us authentically confess our faith, despite unfamiliar references.

How else did that chapel service include the creed?

We recited it together after the sermon. We often use the Apostles’ Creed in our own worship context so can recite it without really thinking about the weight of what we’re saying. Using an unfamiliar creed forced us to think. Also, the Masai Creed’s familiar structure made us relate unfamiliar statements back to the very familiar statements in the Apostles’ Creed—thus eliciting a fresh perspective on what maybe has become a little stale.

Do you have any other tips on being authentic in global worship?

Yes; it’s hospitable for worship planners to include familiar liturgical elements alongside less familiar ones. During our grant year, our chapel weeks were anchored by Monday Taizé services and Thursday communion services. With those familiar anchors, the community could handle Tuesday and Wednesday chapels with potentially new and uncomfortable elements. What began as a form, song or practice new to the community became familiar through repeated practice.

Shaping Worship During the COVID-19 Pandemic: Offering Hope at Grace and Peace Christian Reformed Church, Chicago, Illinois
Chantel Varnado, worship arts director at Grace and Peace CRC, shares her insights for leading worship in the time of COVID-19, drawing wisdom and her own experience from her multicultural worshiping context.
Read more »