Christian liturgical practices—confession, intercession, and preaching—contain wisdom that can bring compassion and consensus to public conversations around contentious moral issues.

In this edited conversation, John S. McClure discusses his 2018 book Speaking Together and with God: Liturgy and Communicative Ethics, an interdisciplinary study of how liturgical practices can improve communication and understanding in the public sphere. 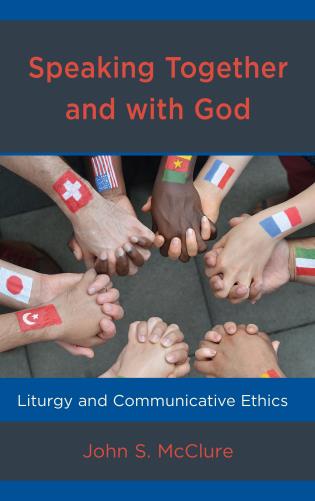 What’s the main message of your book?

I argue that these three practices are valuable as we think about how to communicate better in the public sphere around difficult and hotly contested moral issues.

Christians every Sunday practice confession, which has to do with being truthful in our communication. We practice interceding, which is an exercise in empathy, getting into the shoes of others to understand them more deeply. And then we practice what it means to do the appropriate moral application in our preaching work. I argue that these three practices can be helpful in communicating better across differences.

You call this book an interaction with the communicative ethics of Jürgen Habermas. Could you say a bit about Habermas and why this interaction is important?

First, for me, Habermas is the most significant and forceful advocate for the possibility and importance of cooperative communication in the public sphere.

Habermas is also concerned with the ethical aspects of seeking consensus in the public sphere. He believes that listening, paying attention, and involving the voices of many people in ethical conversations are both possible and needed.

The third thing that’s important about Habermas is his theory of the “lifeworld”—the realm of ordinary human interaction. He argues that this lifeworld is the backbone of the public realm and that informal, voluntary associations like churches and other religious organizations can play a vital role in nurturing better communication.

Habermas is concerned that the lifeworld is being colonized by impersonal systems of exchange and power, like the media and social media. He argues that churches, town hall gatherings, and other face-to-face conversations about things that matter are tremendously important as places where we learn how to communicate and not become siloed.

How do you hope your book will contribute to the homiletical and liturgical conversation in North America?

I’m trying to think about liturgy in a way that is more interactive with the public sphere than what other voices in liturgical ethics have been saying in recent decades. I argue that it’s impossible to not have a lot of cross-migration of practices between the Christian liturgy and other spheres of action and communication. So we need to be thinking about how what we do is already going on outside the liturgy—and vice versa.

In homiletics, I’m interested in providing an ethic for liturgical preaching. I argue that ethical preaching is always best done in a context where there’s confession and intercession—a context that encourages truthfulness and compassion.

Preaching belongs in a context where we are deeply concerned about confessing our sins and being truthful as communicators—sincere and authentic in the deepest sense of the word—and compassionate, as the context of intercession for preaching is also important. I talk to my students about how they might begin the practice of sermon preparation with prayers of confession and intercession for the people they’re about to preach to and the world beyond. I would argue this is the proper liturgical context for all preaching.

How do you hope this book will contribute to the interaction of church and culture?

I’m interested in how the church might speak to the culture about several things. One is the recovery of humility. When we confess our sins, we’re saying we don’t know everything. We’re humbling ourselves before God and each other. We become capable of saying we’ve been wrong. We might even get to the point where we say, “The narrative that I’ve been committed to all my life—I’m a good Republican, Democrat, theological conservative or liberal, whatever—might be distorting my moral vision. I might not know everything.”

Within the Christian paradigm, changing your mind—conversion—isn’t a sign of weakness; it might be the strongest thing you can do. You didn’t see something before, and you see it now. That’s a deep part of what it means to be a Christian. I think Christians contribute that understanding to the larger culture.

Second, because we are intercessors, we might contribute to the ability to be empathetic and compassionate in how we communicate. That means being willing to go with another person on the level of their suffering. Be willing to ask, “Where are the places where you suffer, and does the way that I think or act increase your suffering?” Intercession also means being able to stake a claim on their behalf and utter petitions to God. So I think we have something to offer by contributing what I would call petitionary compassion.

Third, we could contribute to the work of moral application and consensus-seeking in the public sphere. We can say, “I don’t want to try and manipulate you into thinking the way I do. But I do want us to think clearly about which kind of moral norm is most applicable in our current situation.”

When we think about this kind of ethical, communicative practice of preaching, then we might become more genuinely inventive and creative at the intersection of these multiple worldviews around us and multiple forms of suffering in the world. How do we apply the meaning of the gospel in the midst of that? I think we might find ways to get people together and do consensus-seeking in creative ways. We have a lot of imaginative frameworks to work with from the Bible as well, to help us find our way forward.

This all sounds crazy to some extent, right? But my argument is that Christians are not some strange bunch on a hill doing these things—confession, conversion, intercession. These things are already going on in small and incomplete ways all around us, and we have a lot to contribute to doing them better. People know they have to work at being truthful and empathetic to have a good conversation about things that matter. They have to work at doing moral application, applying the best things we know. Christians can help society to do that better and more deeply.

I wanted to learn how to turn our heads from the liturgical practice and say, ”Where do I see something like this happening in the larger culture?” so that we learn how to spot them and then weigh in.

Who’s the primary audience for this book?

The primary audience is scholars across several guilds: liturgics, homiletics, and areas where communicative ethics is of interest, which could include philosophy, sociology, and sociology of religion. The book could also be useful for doctoral students, MDiv students, and scholarly clergy. This is a scholarly monograph; at some point I hope to produce a “so what” book or textbook as a follow-up.

Read a biography of Jürgen Habermas at Britannica.com. Cory Willson on Inhabiting the Liturgy
Maybe you feel like a bad Christian when you catch yourself thinking about work or weekday concerns during corporate worship. But doing so can help you worship more deeply and faithfully.
Read more »