This once-aging, now-thriving Lutheran congregation became more comfortable with worship changes by using visuals and stories, reading books together, and sharing over meals.

American Lutheran Church was still known for its openhearted warmth when Becky Bolander became its pastor in 2006. But the congregation, founded in 1955 in Clinton Township, Michigan, was aging, attendance was dropping, and there were no children.

Since then the congregation has grown in baptized membership, diversity, attendance, and worship participation. This happened gradually, thanks in part to relationships built while doing Vital Worship Grants projects awarded by Calvin Institute of Christian Worship in Grand Rapids, Michigan. Bolander says they could see the Holy Spirit at work during every step—creating an intergenerational faith vocabulary, living into church-year rhythms, and welcoming questions.

“All along the way, we did things not for the sake of newness but to discover what can indeed enhance and deepen worship,” Bolander says. “Most of all I wanted us to know why we do what we do, decide if it is still vital to what we do and, if so, whether we are using it most effectively.”

Bolander knew her congregation was rooted in a rich culture and tradition. However, as the church started attracting people with no Lutheran or even any church background, she knew they needed to develop ways to talk about faith.

Even though Scripture often talks about having “eyes to see,” it’s easy to overlook familiar symbols. American Lutheran began its 2009 grant project by asking everyone in the congregation to read a book about religious images and symbols. “We used two books depending on interest,” Bolander recalls. “A Handbook of Symbols in Christian Art by Gertrude Grace Still went into detail, and Symbols of the Church by Carroll E. Whittemore was really accessible, just pictures with a blurb.”

Each week the bulletin cover would picture and explain a Christian symbol matched to the liturgical season or sermon series. At an Advent family night, people made Chrismons, white and gold Christmas ornaments that symbolize Christ, such as a cross or a crown. For Maundy Thursday, they set up a meal to explain the symbolism of foods on a Passover Seder plate. The grant team began hearing comments such as “I probably learned about that in catechism, but I’d forgotten” and “We as the people of God are commanded to remember, but we often forget some of the depth of what our faith is about. Forgetting diminishes our worship experience.”

Church meals and gatherings provided a safe space for people to talk about their favorite symbols. “We saw the Holy Spirit at work, prompting people to tell how they experienced God in creation and other aspects of life,” Bolander says. So, the grant team asked people to use cameras to take pictures of God in the world, and Bolander asked people to share a story in worship about something that reminded them of God’s presence. The team and church leaders went first and modeled how God can be seen in the wider world and not just in worship. One young woman brought in a picture of a local hamburger restaurant, for example, because she ate Spanky burgers with her father while they talked about faith.

“People submitted photos and words, and a young person printed it all up to look nice,” Bollander says. “We framed these and hung them in our main hallway. Now these images of faces, hands, flowers, buttered toast, and road curves remind us of personal faith stories. After a funeral, families sometimes ask to take home their loved one’s framed piece.”

Learning to talk about faith led the congregation into different prayers, liturgies, music, and Bible translations that were all centered around waking up people to see God at work in their lives and the world around them.

As new young families came, American Lutheran added an early service called Squirmers Worship. All words are projected on screens so parents have their hands free to attend to their children. As soon as they are able, children are invited to read the Scripture lessons or to help with music. “I don’t robe for the early service, but Squirmers Worship still has all the liturgical elements,” Bolander says.

She’d seen the excitement sparked by intergenerational learning about visual symbols, but “we wanted to do more to help everyone see God’s story of salvation in their own lives. We wanted them to start living according to God’s time, God’s seasons, God’s rhythms.”

That’s why the 2013 “Livin’ in the Rhythm” grant project was a multisensory exploration of the seasons of the church year. Every family received a copy of The Circle of Seasons: Meeting God in the Church Year by Kimberlee Conway Ireton. The project also used Celebrating Saints and Seasons by Jeanne Hunt. Though written for Catholic children, the book suggests dozens of activities that worked well at American Lutheran.

“We tried to live in God’s rhythms by scheduling our project from Advent through Pentecost,” Bolander says. “We made T-shirts with our ‘Livin’ in the Rhythm’ logo and sent out weekly email blurbs about each season, such as Advent church practices of waiting, reflection, and hopeful preparation for Christ, or Jewish roots of Lenten practices.”

The grant team created a pie-shaped visual for the liturgical year, and during worship, Bolander pointed out liturgical changes in paraments and symbols. Each season included learning, celebrating with food, and doing something together. They did skits and plays for Christmas and Lent and an interactive reading at Pentecost. For Epiphany the congregation hosted a concert and collected gifts for a local homeless shelter. At Pentecost they celebrated the birthday of the church universal, and people sat at the same tables as others born in the same month.

“Our grant team felt the Holy Spirit’s presence in making things happen, even when we faced obstacles to put on events,” Bolander says. “We still do Pentecost birthday celebrations and talk about the difference between living in the world and living in the rhythm of God’s kingdom.

Church members began inviting neighbors to events, and they started to participate in community projects. They became more aware of the importance of music, rhythm, and extending welcome to all in church and in daily life.

Church leaders noticed that as people became more aware of liturgical symbols and seasons, they said that taking communion was more meaningful. They also began to ask more “why” questions.

Bolander, who became a pastor after a career as an English professor, says that when she was growing up “it wasn’t considered right to question. But Jesus and his disciples asked questions and used questions to teach. I think God put it there in the Bible so we can wrestle with questions and grow in faith and in our experience of community.”

American Lutheran’s 2015 grant focused on asking questions about Lutheran worship traditions and other faiths. A question basket was available at all times, and people submitted questions about church seasons, personal struggles, and current events. Bolander especially loved seeing children submit questions. Question marks posted around the building prompted questions from visitors. The team created event names for the congregation’s sixtieth anniversary, church seasons, and the children’s Christmas program in the form of a question.

“I preached on submitted questions,” Bolander adds, “and we also used short video lessons from a catechism-based series called re-form. It asks questions such as ‘Is the Bible true?’ and ‘Why does the Bible contradict itself at times?’ and ‘Is it okay to be angry at God?’ We used some videos in worship and also in our monthly Saturday catechism classes. The re-form curriculum is very activity-based, so we put activities in bags for people to bring home and do as a family.”

The team planned Questions Around the Table events held at church and in homes. People began asking Bolander questions after worship or telling her what they were reading. As a result of people asking about contemplative worship, the congregation held its first Taizé worship service. They invited speakers from Trinity Seminary and Detroit Institute of Arts to talk about visual expressions of religious faith.

“People often just take in information but don’t question what it means, such as why the congregation responds to [non-gospel] Bible readings with ‘Thanks be to God!’ I loved it when a ninety-five--year-old woman said, ‘I never knew that, Pastor!’” Bolander says. She noticed that more people joined Bible studies at church and elsewhere. Wrestling with questions in community made people eager to research and learn more together, so the grant team started a lending library of books and audio or video recordings.

“Not everyone here comes from the same type of church background or belief system. We are learning to reach out, to understand and respect beliefs from other Christian traditions and other faiths—and how to serve together. Learning new things about each other draws us closer as a church community and helps me preach more effectively. I’ve learned to let others lead, and I’ve learned more about how to let the Holy Spirit work,” Bolander says.

“Now our choir director, who is very good, wants to combine images and songs,” Bolander says. “She is considering doing Return to Me, a Lenten choral service based on the stations of the cross. So, I guess what I’m saying is that not everybody is going to be on board all the time, and they need the room to live that out as well as to have their say. We haven’t really dropped anything, but we have gotten more comfortable with trying different things.”

Gather your worship team or small group to read of The Circle of Seasons: Meeting God in the Church Year by Kimberlee Conway Ireton. It’s also good for personal devotions.

Asking why questions in worship or congregational life inevitably brings up emotions that some people believe have no place in church. If your church doesn’t already make room for anger, confession, doubt, injustice, or sorrow in worship, then consider exploring these topics as good first steps: disabilities, lament, the psalms, and vertical habits.

Feel free to print and distribute this story at your staff, board, arts, or worship meeting. These questions will help people start talking about how to connect public worship to intergenerational faith formation and Christian discipleship. 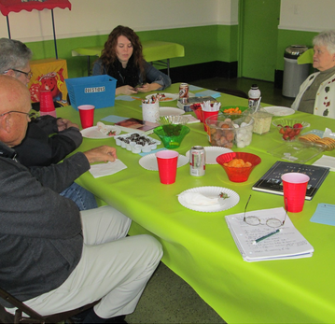 Dealing with Fear in Church Life
How can we worship so that God’s perfect love overcomes all we’re afraid of?
Read more »