Congregations and Persons with Dementia: A Story and Ideas to Try

TOGETHER is a new Bible study curriculum designed to include, appeal to, and challenge adults of varying abilities. The new curriculum is building community in ways that enrich worship in congregations and congregation members with dementia.

This story is a result and coming together of four roles of Barbara J. Newman. As Church Services Director for CLC Network, she has been given direction to work in new and creative areas. As part of this role, she also works with Friendship Ministries to work on a team that has authored and edited the new TOGETHER curriculum materials for inclusive adult small groups. In addition, Barbara serves as a program affiliate with Calvin Institute of Christian Worship, working with that team on Universal Design for worship. Finally, and perhaps most importantly, Barbara has a friend with dementia.

The back story is a friend I know very well who is now in the Cook Memory Center at Raybrook Manor Assisted Living. When people were asking about the new TOGETHER curriculum from Friendship Ministries and if it would work well with persons with dementia, I thought, “Hmm, I want to try this!” I wanted to try it not only for this individual, but I wondered if his story was similar to others living at Cook. This man’s entire life had been bathed in Scripture and prayer. Prior to living at Cook, he would begin and end his day with God, read Scripture and pray at every meal, and spend personal time studying God’s Word and praying over people and events. But without his wife next to him, he was now unable to initiate these things on his own. And while Cook offers many great corporate opportunities for continued interaction with God’s Word and prayer, this man’s personal time with God went from feast to famine very quickly. The time he and his wife spent around Scripture and prayer also changed.

I wanted to pilot two groups. The first would truly be an inclusive small group with this man, his wife, myself, my colleague, and a couple of others from this man’s congregation. We would cap the group at about six people, similar to other adult small groups (with one member having dementia), and we would use the TOGETHER Small Group materials and lessons. Then, since I was there anyway, I volunteered to lead a second Bible study using the traditional Friendship curriculum track, meaning more group members would have dementia. Raybrook Manor was so gracious in allowing for this, providing space and time, and helping to spread the word and facilitate this new Bible study for adults.

I have now completed week number two. And while I think “success” is defined as recalling old learning but also spending time with God, His Word, and one another, I am so excited to say these materials rock! Even better – God rocks!

I love and treasure this time with my friend. I had not heard him pray or put together even two sentences in a long time. So, on a whim in our inclusive adult small group, I asked him to open in prayer both weeks. Totally unexpectedly, he put together at least five complex sentences to form a beautiful prayer that just flowed out of his mouth. His wife and I locked eyes and nearly burst into tears. She said, “I always pray. I never thought of asking him to pray anymore. But I will now.” It was such a gift – two weeks in a row – and it was so natural to him, like breathing. In the second group, another man volunteered to pray and he even included, “…this is a new Bible study and we ask you to show us how we can grow and learn together…” Wow. Later on in the Bible study he answered another question and I struggled to see how it connected with the topic, so I could see his prayer was another gift that day.

Singing is another favorite time. The curriculum suggests using You Tube, and while I am deviating from the suggested songs given the group of people, I ask for song requests that include the name “Jesus” (we are doing the Jesus Face to Face unit). We type in the request and pull up the music and lyrics right there. Both groups, however, join in with harmony, connected words, and worship. I am struck by the power of song. “My Jesus I love thee, I know thou art mine” speaks to me as I watch every mouth join in on those words. It’s incredible. I had planned to bring alternate ways people could join into song, but each one is participating in some way.

The visuals with the Bible study and the remaining parts of our time have sold me on the power of this curriculum regarding persons with dementia (as well as many other people too). In fact, in talking with one of the small group participants, she noted that there is such great variety that all people present can enter into the discussion and learning – together. Yes, TOGETHER is well named. It’s amazing, though, to watch how people who have fewer spoken words will notice things, volunteer verbal information, or answer based on touching some of the visuals. Most parts of the learning are about three to four minutes in length before switching the mode of delivery, and that time amount seems to be perfect. It’s a multi-sensory approach that seems to be able to foster participation for all.

HURRAY for UNIVERSAL DESIGN! It seems to have pulled in these senior saints. The first week we ended by having each person pull off their name tags and put them in a hat. Then everyone pulled out the name of someone they would pray for this week. In the first adult small group, my friend with dementia pulled my name. I saw it later in his room beside his chair when I went back to see him. I said, “I am so glad you are praying for me.” He tapped my name card that said, “Pray for BARB” and he said the most beautiful things to me – encouraging words filled with love and affection. And he remembered the second week that he was praying for me that week. In the second group, people seemed so very excited with those names;  they felt called into service, I think. They took this very seriously and many wanted to keep praying for their person this week too.

The second week as we ended I intended to sing over them the song, “Turn Your Eyes Upon Jesus”, but the group knew it and we sang without YouTube or any instruments at all. It was such a beautiful ending where I could use each person’s name in prayer and speak a promise from Scripture over the members of the groups. I was delighted that the materials have such intimate times of worship embedded in the materials.

While I hope to have more direction and feedback at the end of our eight-week study with my two groups, I see so much potential for congregations and Christian residential places like Raybrook Manor. I am imagining that a pastor from a local congregation could pull together people who have been part of his or her congregation from all the living places at Raybrook Manor Assisted Living into one Bible study. This would reflect one age group, but varied abilities and people who know one another from their home congregation. It would give materials to use where people of all abilities could relate around Scripture. I also envision a congregation choosing to hold one of their adult small groups at a place like Cook Memory Center and have just one of the members be experiencing dementia; meeting in that place can include that person in continued congregational life. It would also be great for churches who have members with dementia who continue to live in their homes and attend church regularly. What a great set of study materials to use for adult small groups to pull in that person with beginning stages of dementia. I could also imagine chaplains or activity directors choosing to offer a weekly Bible study at places similar to Cook, primarily focusing on persons with dementia. Most of all, however, I see my friend being able to have another way to feast on God’s Word during this part of his life. I see ways for he and his wife to continue to gather around God’s Word and worship in ways that are accessible to both.

This has been a gift to me, and I hope and pray it is a gift to many others in the future.

Use tips from Barbara Newman’s article “Ten Ways to be More Inclusive and Welcoming in Worship and Church Life.”

Read the book Including People with Disabilities in Faith Communities by Erik Carter, who will present at the 2018 Calvin Symposium on Worship.

Adapt the TOGETHER Bible study sessions to the needs of your group. 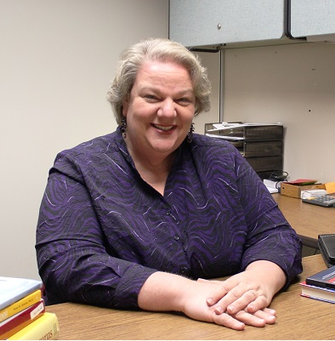 Barbara J. Newman on Adult Inclusive Small Group Bible Studies
TOGETHER is a new Bible study curriculum designed to include, appeal to, and challenge adults of varying abilities. It aims to build community in ways that may enrich congregational worship.
Read more »

Aging Together in Grace
Churches can offer a countercultural message about the gifts of older adults and walking with them through the challenges of aging.
Read more »