Come, Thou Fount of Every Blessing: The Aeolians at Calvin University

The Aeolians of Oakwood University led a festival of songs at the Calvin Symposium on Worship in January 2020.

The songs below come from a song festival at the Calvin Symposium of Worship in January 2020 and was led by The Aeolians of Oakwood University, directed by Jason Max Ferdinand. The orchestral musicians are from the Grand Rapids, Michigan area.

The Aeolians of Oakwood University, established in 1946, performs choral music repertoire from the Baroque era to the 21st century, under the direction of Jason Max Ferdinand. In 2017, they won the Choir of the World award at the LLangollen International Musical Festival. In 2018, they won three gold medals at the 10th World Choir Games and the championship in both the University Choirs and the Spirituals categories. In 2019, they became the first HBCU choir to be selected from blind auditions to perform at the National ACDA Conference.

Jason Max Ferdinand is a professor, the director of choral activities, and the chair of the music department at Oakwood University, Huntsville, Alabama. He is in his twelfth season conducting the world-renowned The Aeolians of Oakwood University. He maintains an active schedule as a composer, presenter, adjudicator, and guest conductor for high school, collegiate, and church choirs throughout North America, Europe, Asia, and the Caribbean. His choral series bearing his name is in circulation by Walton Music, a division of GIA Publications, Inc. His greatest passion is watching those who he has mentored become conductors and composers in their own right. 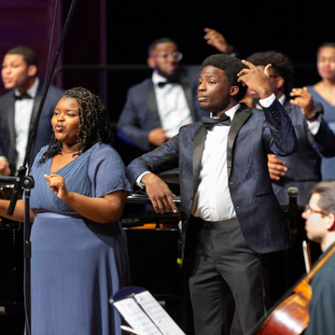 My Soul Finds Rest in God
Join with singer-songwriter Sandra McCracken for contemplative songs and liturgical prayers, while making space within this worship service for both lament and joy.
Read more »