Bob Waldrop on How Earth Care Led Him to God

In this edited conversation, based on emails and an April 2013 phone conversation, Bob Waldorp explains how his church work and activism fit together. 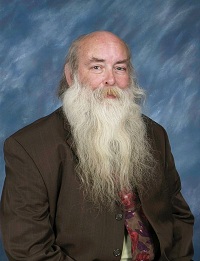 Bob Waldrop, the music director at Epiphany of the Lord Catholic Church in Oklahoma City, is author of iPermie: How to permaculture your urban lifestyle. Waldrop helped found the Oklahoma Food Cooperative, the first food co-op in the U.S. to focus solely on locally-grown and -made food and non-food items. He founded the Oscar Romero Catholic Worker House to help deliver food to people in need who don’t have transportation.

For Christians who don’t know much about creation care, how do you explain why you see it as essential to Christian living?

I always start with the story of creation, and God's judgment that the creation he made was good. God said the role of humanity is to be stewards of creation. I ask, "Did God create the planet for us to turn into a landfill?"

What term does Church of the Epiphany use most often to express the idea that the Creator of the cosmos is working to make all things new through Christ?

The most common terminology we use that relates to environmentalism per se is "care of creation." This comes up quite frequently in the Prayers of the Faithful at our Sunday and weekday masses and is sometimes referred to in homilies from our pastor.

Do you ever choose congregational songs and choir anthems that deal with care of creation?

I consider the music that I pick to be as much of a sermon as anything spoken from the pulpit. We often open and close mass with different verses from the same song, such as “For the Fruits of His Creation” or “Gather Us In.” During Ordinary Time, I typically use the same closing song for three weeks in a row, and that song will nearly always have a social justice or creation care theme. I love using “Lord Whose Love in Humble Service” set to the Beach Spring tune. “Sent Forth by God’s Blessing” and “Canticle of the Turning” work well too.

Do you have a favorite example of someone who began to practice care of creation and then began to see the Bible with new eyes?

That would be me! I’m a convert to the Catholic Church. I grew up in Oklahoma but moved to California after my mother died in 1975. I was into Mother Earth News and Whole Earth Catalog. I’m not a vegetarian but I loved how the Laurel’s Kitchen vegetarian cookbook talked about being mindful about food and cooking. The women’s movement was barely getting going then, and people devalued cooking because they thought of it as women’s work.

I was in a libertarian anarchist phase for 18 years. I kept my earnings low so I would not have to pay taxes. While living in Utah, I learned to grind grain and make sourdough bread because I was too poor to buy bread. Some libertarians I knew told me about Ammon Hennacy, who had done a mural about the martyrdom of labor activist Joe Hill, and who had converted to the Catholic Church.

In that context I started to read Augustine and Dorothy Day and to attend mass. That thread of Catholicism met where I was already at. My faith blossomed. Like CS Lewis said, I was “surprised by joy.”

From your book iPermie, it’s obvious that you envision dozens of ways that churches could be more visible examples of Christ’s body on earth and more powerful forces for the common good. Do you feel a gap between your music director role and the rest of your life?

Many people I network with in the sustainable living movement don’t know what to make of my Catholicism. If they look on www.justpeace.org and my other websites, they run into my faith.

I don’t feel a gap at Epiphany because we’re considerably invested in service projects and financial donations for justice and charity. Epiphany has been part of the Oklahoma Food Cooperative from the very beginning.

About a third of all dollars donated to the parish end up at Catholic charities, Archdiocese programs, national collections in Catholic churches, St. Vincent de Paul, and so on. Half of financial donations to my Catholic Worker House come from Epiphany parishioners, as do a third of our volunteers. Our youth group does service projects each week in the summer. There seems to be a strong parish culture to "be doers of the Word, and not just hearers."

Epiphany has taken lots of steps to curb energy use. We participate in a commercial paper recycling program. Oklahoma City does not have recycling for businesses, so parishioners often take home glass and plastic from the parish kitchen to recycle in their own curbside bins.

What else do you hope your church will do to care for creation?

I’d like to see us establish a parish composting program and an actual parish board for care of creation. Also, we don’t have much edible landscaping. Planting pecan trees in parking lot islands would yield nuts while providing shade to mitigate the urban heat island effect.

Our parish council recently voted to drill a well on parish property to replace our use of irrigation water for the parish grounds. If the water is pure and sweet enough, it will replace our culinary usage also. This is a good move, because our city’s water supply is entirely derived from surface water. We’ve been in drought for two years and the state climatologist predicts that will continue for another ten years.

Creation Care for Church Buildings
There is a rapidly growing cultural expectation that buildings must be crafted to be environmentally friendly and sustainable for future generations. At the same time, many Christians are realizing that environmental issues are not merely political or technological but also spiritual, especially in terms of stewardship and social justice.
Read more »