Worship in the Season of Creation and Earth-Themed Sundays

Green congregations around the world celebrate the Season of Creation, emphasize earth keeping throughout the Christian Year and plan other earth-themed Sundays. 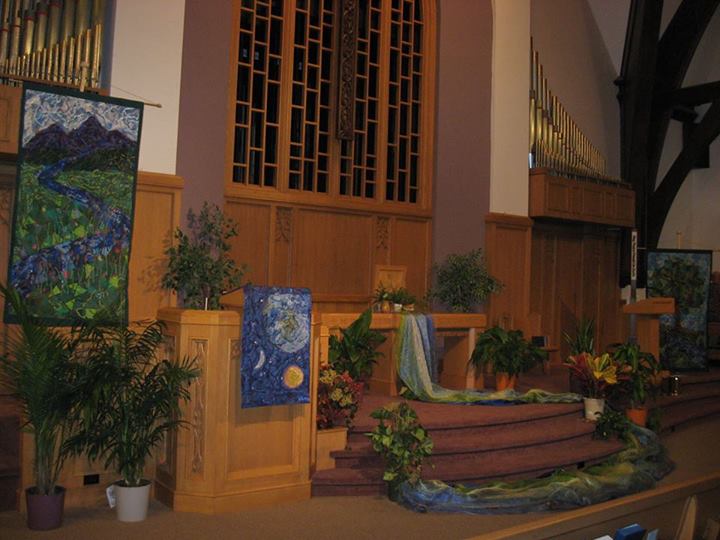 Regularly including creation care in worship leads to changes in how congregations and members live out their faith.

For example, worshipers at Frame Memorial Presbyterian Church in Stevens Point, Wisconsin, don’t panic when sermons mention climate change. They’ve been celebrating the Season of Creation each autumn since Susan Zencka became their pastor in 2006. Studying what the created world reveals about God helps them notice what the Bible reveals about God’s relationship to humanity and all creation.

“The earth—the most essential holy place—belongs to God. We hold it in trust for those who come after us,” Zencka said in a 2009 sermon about God’s presence in holy places.

Frame Pres members have joined campaigns for clean energy, soil conservation and limits on high capacity wells. They’ve shared testimonies on how God changed their relationship to the earth. All these things get prayed for and preached about in worship, which reinforces that they matter in faithful living.

Protestants and Catholics now celebrate a liturgical season within the Season after Pentecost (Ordinary Time). This new season is known in North America and Australia as the Season of Creation and in Europe as Creation Time or Time for Creation. Churches in Asia or Africa also observe this season. It runs for four to six Sundays and overlaps with the Orthodox Day of Creation (September 1) and Roman Catholic St. Francis of Assisi Blessing of Animals (October 4).

The Season of Creation draws attention to biblical themes that are often missing from worship and lived faith. The traditional Christian Year liturgical calendar celebrates the work of Christ (Advent through Easter) and the Holy Spirit (Trinity Sunday through Christ the King Sunday). This new season focuses worship on the relationship between God and humans, and corrects the impression that caring for creation is optional. “The way the gifts of the creation are treated today amounts to a denial of God,” wrote Lukas Vischer, the late Swiss Reformed theologian.

Lutherans Norman Habel, who developed the Season of Creation in Australia, and David Rhoads, who adapted it for the United States, say it reorients our relationship with creation. It returns us to our biblical roots of seeing that we’re part of the earth. The Psalms call us to sing with trees, exult with fields and roar with the sea in praising and serving God.

The Season of Creation follows a three-year cycle of themes and readings. Like the Revised Common Lectionary, its gospel readings come mainly from Matthew (Year A), Mark (Year B) and Luke (Year C)—but uses different portions. Each Sunday highlights a domain of creation.

Year C readings show God’s wisdom in designing the web of life and prompting each element to play its part.  On Ocean Sunday, Australian children process into worship carrying seashells, tiny boats, penguin puppets and photos of seabirds and fish to place on the communion table. Before the confession and pardon, worshipers pass around a bowl of sea salt, tasting it to evoke memories. During the sending, congregations commission and pray for their earth care ministry teams.

Year A readings show the Holy Spirit breathing life into creation, suffering with and renewing all creation. Some churches worship in the woods on Forest Sunday. Others fill the worship space with ferns, forest plants and live trees, including a large one to symbolize the Tree of Life. Some run a chainsaw for a few seconds during the confession. In Racine, Wisconsin, St. Andrew Lutheran Church finishes worship by planting trees on the church property in memory of members who have died.

Earth keeping throughout the Christian Year

Every liturgical season has potential for reorienting worshipers to their place in creation. Advent can include all creation groaning together. Environmentalists often despair, but, as Lukas Vischer explained, Christ offers a stronger, surer hope than what humans can hope to achieve in saving the earth. “This witness is the deepest meaning of a Time for God’s Creation,” Vischer wrote in a 2006 European Christian Environmental Network case study.

Lent is a time to grieve and turn away from individual and corporate practices that harm creation. Many congregations fast from carbon during Lent. They walk, bike, take public transportation or carpool to worship. Christians in the United Kingdom recently prayed, “Father, help us to see how our lifestyle affects your creation and to remember people who are suffering because of it.” That Lenten prayer came from Tearfund, an organization which works through churches to end poverty.

Also during Lent, Ecumenical Water Network offers Seven Weeks for Water resources to help worshipers pray for the world’s 900 million people who lack clean water. The intercessory prayer in a service planned by Christians in India used glasses of clean water and salted water, a bottle of Coke, and an empty glass. These visuals helped worshipers intercede for people who protect clean water, are affected by rising sea levels, lose water coopted by multinational firms or have no source of clean water.

God, the Source of Life, designed the natural processes that support human life. Gradually, more Christians are realizing that food and land, not money, are the true base of every economy. This leads some churches to plan Rogation services or Good Seed Sundays. They thank God for clean air, clean water and healthy soil and ask God to bless fields, gardens, seeds, animals and all those involved in producing food.

As they include creation in worship, churches realize it’s important to cooperate with other congregations,faith traditions and organizations for environmental protection. They show solidarity by planning worship related to World Water Day, Earth Day and national Thanksgiving or harvest holidays.

Churches around the world observe the United Nations’ June 5 World Environment Day on the nearest Sunday. In 2013, congregations in many places celebrated the Eucharist outdoors and planted trees and flowers. Pope Francis spoke out against “a culture of waste” that neglects the poor. Anglicans in South Africa used a litany of thanks that began: “Lord Jesus, you looked at the sparrows, of little worth in the marketplace, and saw how not one is forgotten by God.” All the people responded, “Praise the Lord, O my soul!”

Download liturgies and other worship resources from Season of Creation, Let All Creation Praise, The Text This Week (scroll down) or World Council of Churches. Download “Time for Creation” from European Christian Environmental Network for the history of this movement in Europe. Plan a St. Francis Blessing of the Animals service.

Buy The Season of Creation: A Preacher’s Commentary by Norman Habel, David Rhoads and H. Paul Santmire. Gather a group to read and discuss Ritualizing Nature: Renewing Christian Liturgy in a Time of Crisis by H. Paul Santmire. He writes about contemplating the world of nature from within the cultural world of Christian worship.

Consider using Carbon Fast or Seven Weeks for Water worship resources during Lent. Looking for hymns about creation care and environmental justice? Check out these Advent and Christmas, Earth Day and GreenFaith songs.

Feel free to print and distribute these stories at your staff, worship, board, or church education meeting. These questions will help people think about why and how to plan a Season of Creation or creation-themed Sundays.

If your congregation began observing the Season of Creation, what changes might it spark in congregational life, members’ sense of God’s presence or community witness?

Bob Waldrop on How Earth Care Led Him to God
In this edited conversation, based on emails and an April 2013 phone conversation, Bob Waldorp explains how his church work and activism fit together.
Read more »

Green Congregations Promote Sustainability
Whether your church goes solar, diverts money from utilities to missions or plants a community garden, you can find creative and sustainable ways to model that the earth is the Lord’s.
Read more »

Approaching Civic Holidays as Occasions of Both Thanksgiving and Lament
The Psalms form us as people of faith to express both thanks and lament to God. This offers us a perspective that is especially needed when we worship together on or near civil holidays, and face the temptation to promote a civic religion substitute for robust Christian vision.
Read more »