This service takes place at Calvin University in Grand Rapids, Michigan. It is a service of the word based on Romans 8:1-8.

A worship service from the 2021 online Calvin Symposium on Worship. 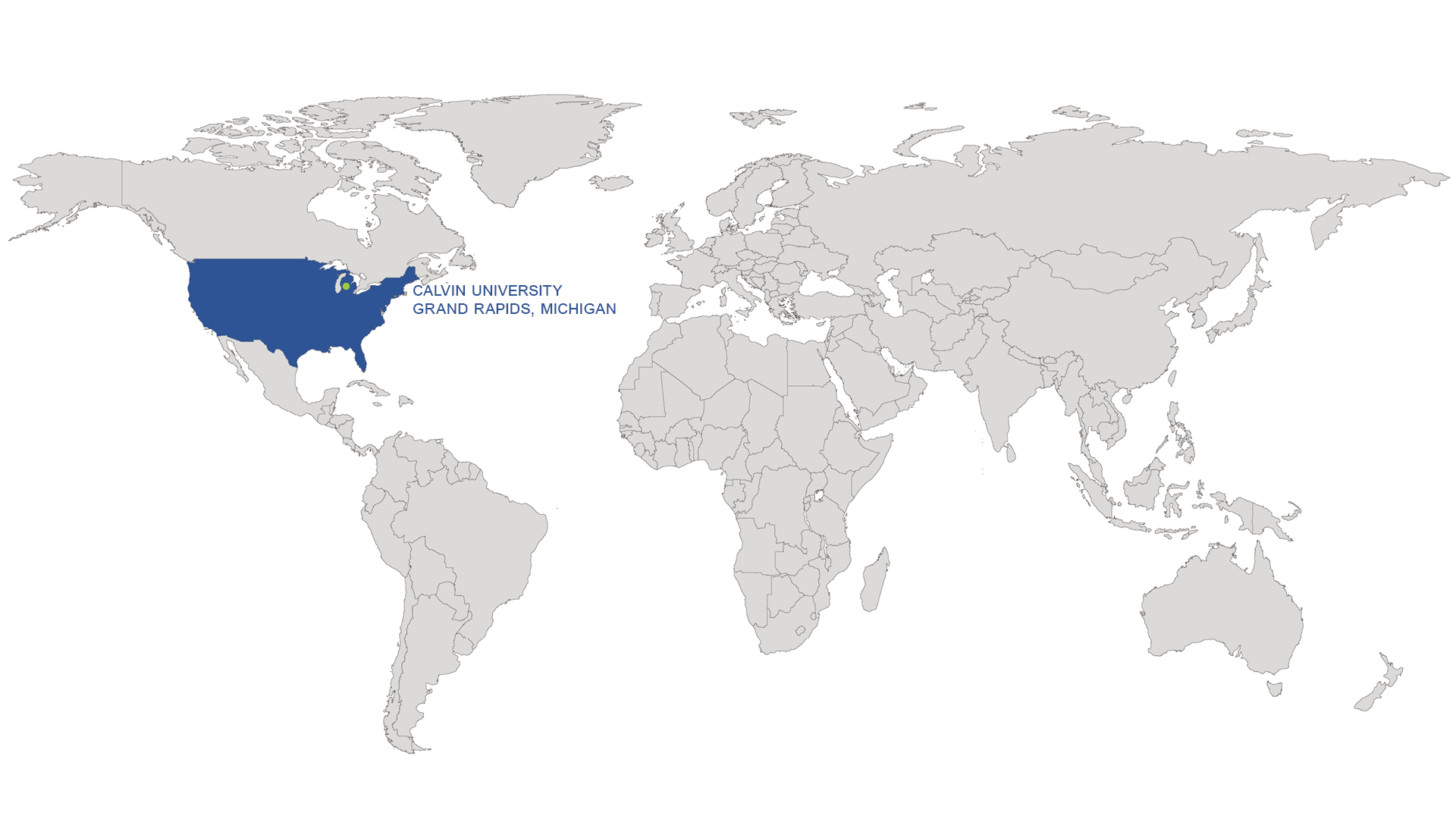 “Yet Not I but through Christ in Me”
Text and Music: Jonny Robinson, Michael Farren, Rich Thompson © 2018 CityAlight Music, admin. by Capitol CMG Publishing, Integrity Music, David C Cook
Used by permission. CCLI #400063.

A friend of mine pulled into her driveway, which is bordered by her garden, and when her eyes fell on her garden, this was the voice in her head: “You could have brought more flowers to people this year.”

That was the voice.  It wasn’t, “Great job on the garden—it still looks great! Think of all those happy memories!” No, the voice was, “You have not done enough. You could have done more, but you didn’t! #Fail.” That was the voice!

This is when you see the picture of the newly engaged couple on Instagram, and the voice says to you, “You will always be alone.”

This is the voice that adds a running commentary of condemnation to our lives: Why did you do that? Why did you say that? That was stupid! They’re going to think you’re stupid now because you said that! Why can’t you get your act together? Come on! What is wrong with you?

And the voice isn’t content merely with the audio. They also have great playback video—HD, surround sound. Let’s look, shall we, at this memory from seventh grade when you were mortified. Or how about this memory from the high school dance that you will never live down? Or how about fresh from this morning when you said that thing that you regret?

The apostle Paul? He knew that voice.

That’s the voice: What a wretched person I am! Why can’t I get my act together? That’s the voice! And if we’ve got videos, Paul had videos. How many times do you think he replayed that scene of Stephen’s stoning, when he just stood by and watched people’s coats? How often did he rehear the screams of people as he dragged them off to jail for following Jesus? How many times did he do a play-by-play of that conversation with Barnabas when they disagreed about whether or not to take Mark with them, and he tried to think about what would have happened if he’d said something different?

Paul knew the voice. Paul had seen the videos. But what’s really interesting is the quick turn here, from “What a wretched man I am!” to this part that we read here in Romans 8. I mean, it’s like boom-boom! And what we see here in Romans is actually a reflection of Paul’s life.

And so what we see when Ananias comes in and lays his hands on Paul [and] prays over him, he gets his sight back, Paul goes to the synagogue. And he doesn’t sit in the back wearing a baseball cap and sunglasses. Paul goes into the synagogue and starts telling people about Jesus! “Do you know about Jesus? Have you heard about Jesus? Let me tell you about Jesus!” And the people in the synagogue are like, “Hold on. Isn’t this the guy who was killing people over this?” And he’s like, “Yeah, I know, I know. I have bad stuff in my past. But Jesus.” But Jesus.

He goes toward people and he tells them about Jesus. And this is why he can write to the Romans, “There is therefore no condemnation for those who are in Christ Jesus.” Zero. Nada. No condemnation. Not even for me. Because he realizes that if the resurrection of Jesus Christ is true, then the voice of condemnation is wrong.

That voice that tells you that you are not enough? Wrong. The voice that tells you you’ll never measure up? Wrong. The voice that tells you no one will ever love you? Condemned. Because the voice of condemnation, friends, is the voice of the enemy. And in the cross of Jesus Christ the enemy himself was condemned; the enemy himself was conquered. And so Paul says now we get to live not with our minds set on the flesh, but with our minds set on the Spirit. He says when your mind’s set on the flesh, you think about what you’ve done. You dwell on the things you could have done differently. You replay those videos over and over and over and over again. When your mind is set on the flesh you hear the voice of condemnation. But, he says, when your mind is set on the Spirit, you live a life of light and peace. You get to talk back to the voice. You get to say, “I’m sorry, there is now no condemnation. I’m sorry, there is forgiveness for that. I’m sorry, talk to the hand that’s been pierced.”

Once a year here we have a panel of students who talk about their recovery from pornography addiction. And they sit up front, like here, on stools, for everyone to see them, for everyone to know their name. Their friends come; some of their friends knew about the addiction, some didn’t. And they tell their story. And you think, Wow, here’s this thing that should have had them locked in their past, that should have had them so ashamed, and here they are just talking about it! How can they do that?

Because Jesus. Because that’s what no condemnation looks like. No condemnation means that I can stand up and I can talk about the deepest, darkest crap of my past, and that is condemned, and I am not.

There is therefore no condemnation for those who are in Christ Jesus, and the voice we get to listen to now is the voice of Jesus.

There’s this story in John 8 about a woman who’s caught in adultery. Now obviously there was also a man who was caught in adultery; what happened to him I don’t know—different sermon. But this woman gets caught in adultery, and she’s dragged before Jesus by people who say, “We’re ready to stone this woman; what do you think about that?” And Jesus says, “Oh, um, hey . . . is there anybody here who doesn’t have any sin? Anyone? Because you get to go first. I’ll just be over here drawing on the ground, and you figure out who’s got no sin.”

And what happens is they all leave. And he looks at this poor woman, and he says to her, “What? Is there no one here to condemn you?” And she says, “No, sir.”

When you pull in next to a beautiful garden and you immediately start thinking you should have brought flowers to more people, the voice of Jesus says, “I think you brought flowers to several people and they were happy; let’s call it a win.”

When you see the engagement picture pop up on Instagram and you immediately feel *aaargh*, Jesus is like, “Hey now, eyes up. Good for them. And guess what? It could happen for you someday, and if it does, great, and if it doesn’t, you’ll still be OK.”

And when you look at the work you’ve got to do between now and the end of the semester, it’s the voice of Jesus that says, “Honey, we’ve done hard things before, and we can do hard things again. Let’s go.”

Let me tell you what Jesus says to you right now. Let me tell you this: There is therefore now no condemnation, not even from our own heads, for those who are in Christ Jesus.

Friends, this doesn’t just apply to other people. This applies to us. This applies to you. There is therefore now no condemnation for those who are in Christ Jesus. Blessed be his holy name. Amen. 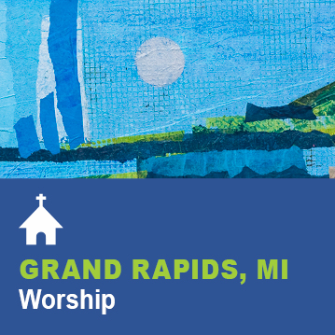 The Theology behind Early Christian Worship
A discussion of the relationship between worship and theology in the early church, and what this means for us today.
Read more »