The theme of “Living in Hope and Grace,” based on 1 Peter, threaded through much of the three-day Calvin Symposium on Worship that drew some 1,500 participants Jan. 30 - Feb. 1 from across North America and beyond.

Sponsored by the Calvin Institute of Christian Worship, the event began with an opening worship time on Thursday morning, Jan. 30, featuring music, liturgical dance, prayer, and a message offering hope to churches seeking ways to address the many issues posed by contemporary culture. In fact, determining approaches that arise out of Scripture, worship, and personal experiences in order to build and sustain healthy churches was an important topic at this year’s symposium. 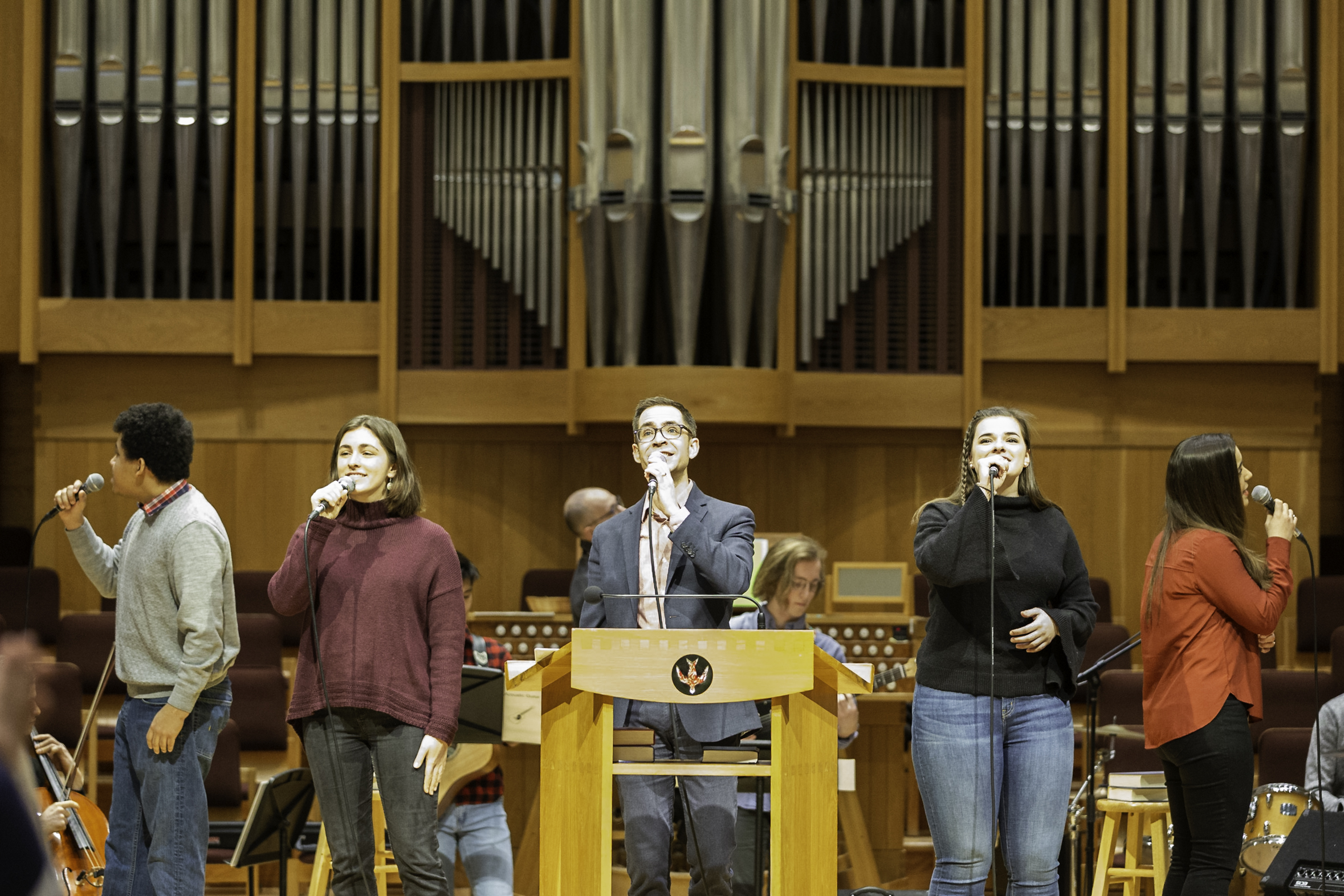 In 1 Peter, the writer addresses members of the early church who face a time of oppression and transition. During the opening service on Thursday morning, worship leaders took up the theme of God’s care for his people in times of tension and stress by reading from Psalm 107, which echoes with this refrain: “Then they cried out to the Lord in their trouble, and he delivered them from their distress” (vv. 6, 13, 19, 28).

Worship that morning was led by Paul Ryan and the Calvin University Worship Apprentices.

Seasoned symposium goers and those new to the annual event filled the Calvin University chapel in Grand Rapids, Mich., for the service and listened to Betsy Devries, a graduate of Calvin Theological Seminary, preach from 1 Peter 1:3-9. She began by likening electricity to the way in which we can experience God’s hope and grace in the midst of challenges and even our own suffering.

Without the positive and negative electric poles connecting, said Devries, there is no current, no power. But when you send power  through one node that is near a grounded node, she said, you get a sparking action as the electricity arcs in midair, and if the nodes are held in proper tension, “you see this dancing spark of energy. . . . The spark and the energy are only there when you hold the two poles together in tension.”

Similarly, said Devries, there is a “dynamic tension in which we live a life of joyful expectation while experiencing suffering.”

Devries, who is currently working on a Ph.D. with an emphasis on homiletics at the University of Toronto, went on to say that being in this tension — experiencing the world right now and all of its suffering and having an active hope for the future — keeps a church on its toes, moving it forward, fueled by the dance of dynamic energy.

“It is against this backdrop of [hope and] suffering that God offers protection — the inheritance of salvation,” she said. “The presence of Jesus Christ is now present in the Holy Spirit that brings about the salvation of the whole self. We will get a glimpse of that energy, the buzzing current [of the Spirit] this weekend,” Devries added.

The Spirit at Work in Us

In a plenary presentation on Friday morning, Leopoldo Sánchez, a professor of systematic theology and Hispanic studies at Concordia Seminary, St. Louis, Mo., also took up the theme of how the Spirit moves and changes us, and how the Spirit can change our churches and the ways in which we worship. 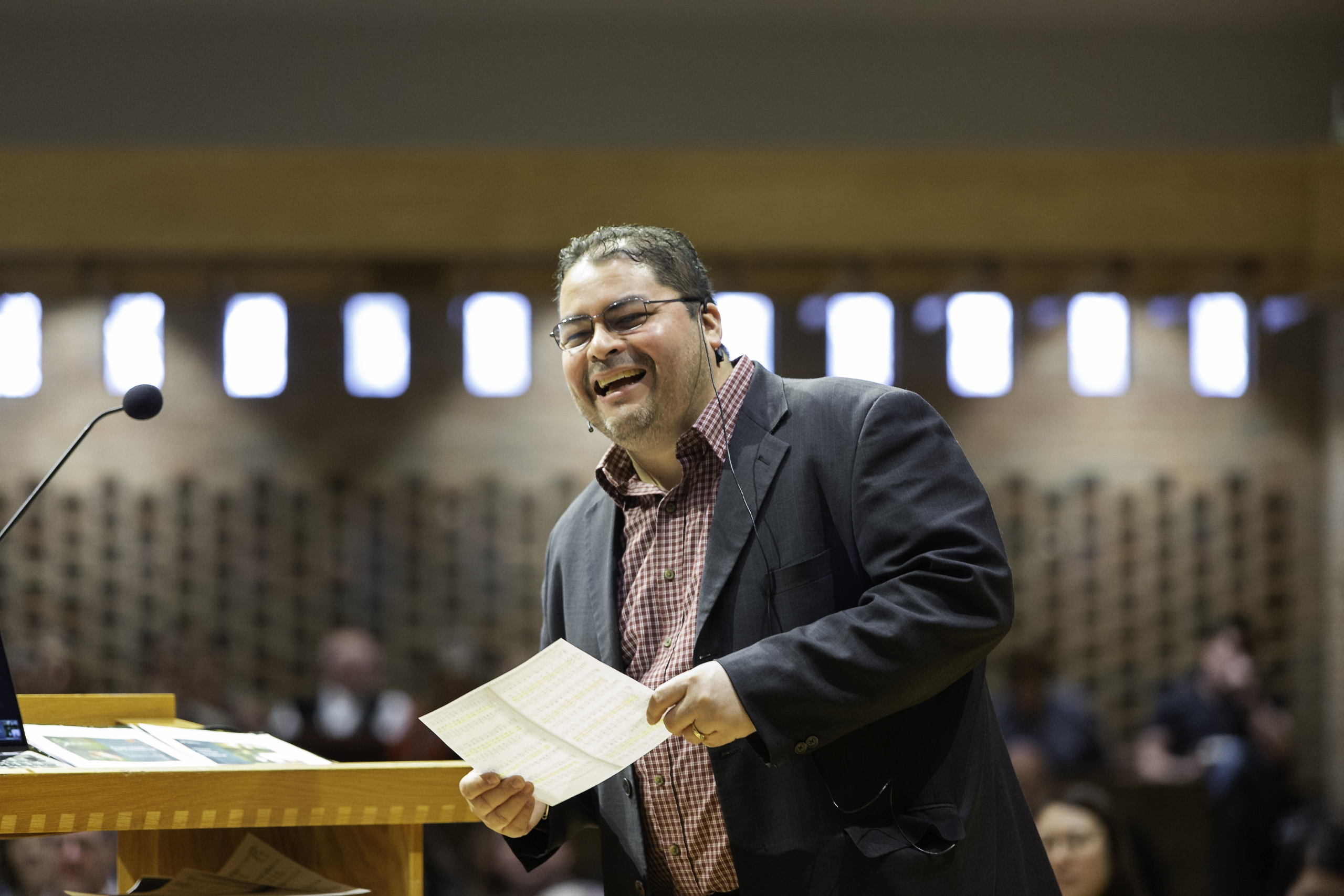 “The Spirit is above and totally a gift from God; it is totally for us and for our faith,” he said. Jesus is generous to us; he doesn’t keep the Spirit for himself. Instead, Sánchez went on, Jesus pours his Spirit out on us, helping and guiding us to face struggles.

If we are open to the Spirit, spreading wide our arms to it, the Spirit can transform us and the world in which we walk and talk, pray and hope, grieve and seek joy. The Spirit, said Sánchez, “sculpts, molds, sanctifies, and sharpens us in God’s image. It gives us the form of Christ in our lives.”

Joining the Spirit in Forsaken Neighborhoods

The Spirit is working in gritty ways in the Englewood Community in Chicago, transforming a few churches from stand-alone entities into active, vital parts of the local neighborhoods.

While many of the more than 130 churches in this area are keeping to themselves and even locking their doors during services to protect against unwanted visitors, a few are taking a different approach.

Now leading one of these churches is Jonathan Brooks, who grew up in Englewood and then moved away to attend college, never intending to come back. But more than 20 years ago, he returned home to tend to his ailing mother. Since his return, amazing things have happened, and often-traditional notions of Christian ministry have been turned on their heads, bringing new revelations, he said during one of the dozens of seminars held at the symposium.

Symposium topics included “Worshiping with the Psalms across Times and Cultures,” “Framing Worship in New and Established Churches,” and “Worship, Cultural Differences, and a Kingdom Vision for Life Together?”

In a seminar titled “Church Forsaken: Practicing Presence in Forgotten Neighborhoods,” Brooks explained that when he left home to study architecture in college, he wanted to leave behind the violent, poverty-stricken neighborhood that shaped him as a youth. He was chasing the American dream of upward mobility and financial rewards, he said. 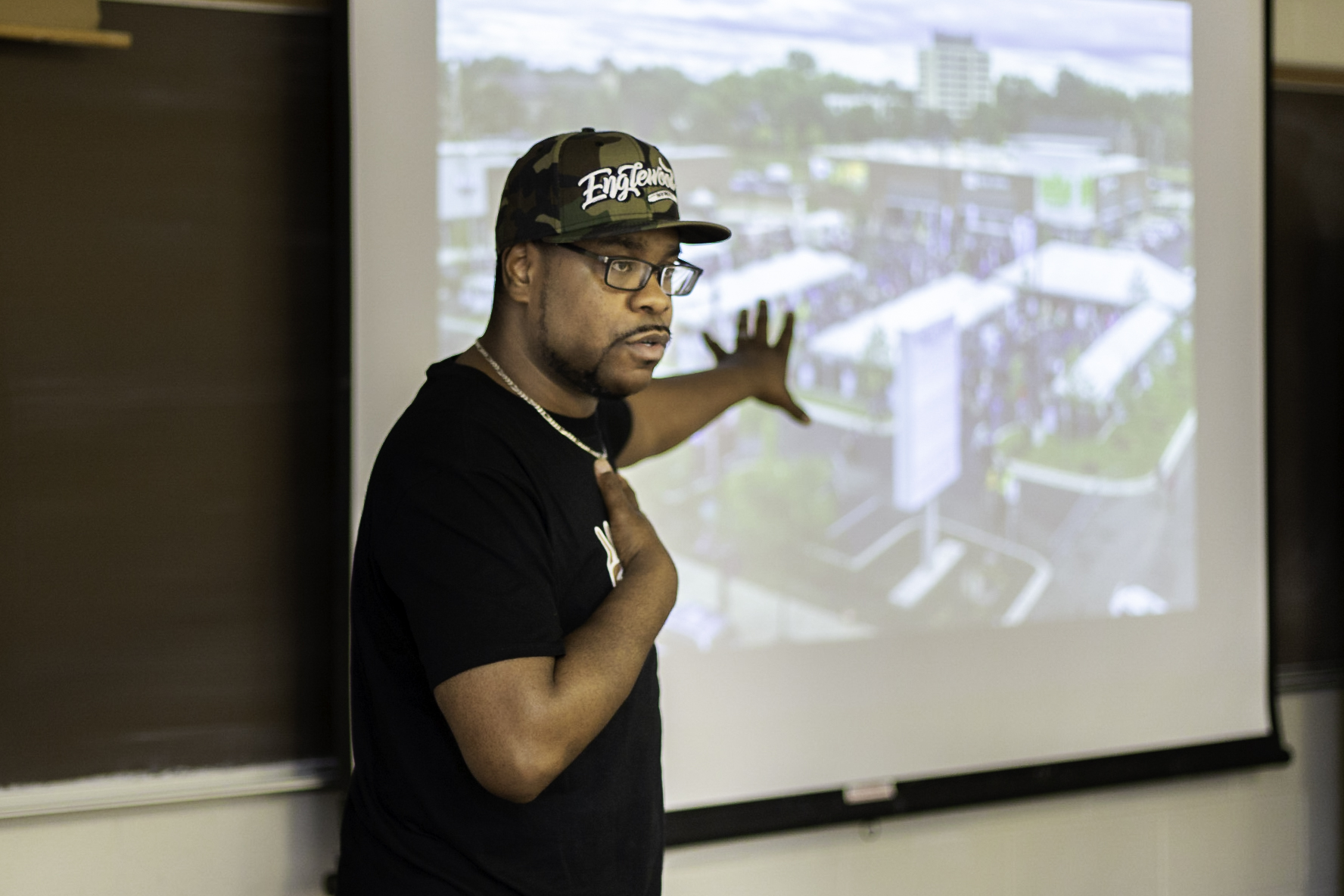 But slowly that changed after he returned to be with his mother and, in need of a job, took on the role of being a youth leader at Canaan Community Church, just down the street from his mother’s home. Brooks found that he liked the work and was good at it — and the lead pastor noticed too. Later, when the lead pastor was leaving for another church in 2006, he asked Brooks to take over. Though hesitant at first, Brooks accepted the position — and that’s how his journey into neighborhood ministry, which he argues can be the salvation of the church, began, he said.

“All of us have a place where we are called to be,” said Brooks, author of Church Forsaken, the story of his evolution as a minister and how he in partnership with others has helped to transform Englewood into a more prosperous community.

“Where you do ministry is not your choice. God carries you there. The challenge is to understand where God wants you to be,” he said.

On the first Sunday he preached at Canaan, Brooks said, he had a harsh wake-up call, making it abundantly clear what he was facing as a new pastor. Just as he began delivering the sermon he had prepared, gunshots rang out on the front steps of the church and young men started brawling.

Brooks rushed out from the pulpit, as did others, to calm the fight, which had started over a missing cell phone. As police and ambulances arrived, Brooks guided everyone back in, returned to the pulpit, and said simply: “Welcome to Canaan Community Church, where guns make the difference” — a play on the church’s motto of “Welcome to Canaan Community Church, Where God Makes the Difference.”

Surprisingly to him, Brooks said, his words helped to clear the air. Everyone burst into laughter and began to talk about and process what had happened. And Brooks had a sense that he could answer the calling God had put on him to serve in this deeply challenged area and to do it effectively.

Over time, and as a result of many experiences, such as standing on street corners and talking with young men playing dice, Brooks saw clearly that if his church was to endure and thrive, it needed to risk reaching out in different ways to meet and, when asked, try to help with the needs of its neighbors.

But connecting to the community as one church is not the bottom line, he said. “Church is about the communal flourishing of a place. It is about partnering” with others who are already involved in the community. “It is not about how a church comes in and makes everything better,” said Brooks.

Churches seeking a stronger future, he said, should ask how they can be an asset to their community. “You have to start listening. If you want to see things shift, you have to change your activities.”

Quoting from the final verses of 1 Peter in the closing worship service of the symposium, Peter Jonker noted that the church today must be wary and “of sober mind,” always humbling itself before God, because “your enemy the devil prowls around like a roaring lion looking for someone to devour” (1 Pet. 5:8).

And today, he said, this devil is the secular culture in which we live — a culture that largely casts the church aside and is defined by success, acquiring goods and a system of morals that lacks a firm foundation and clear direction. 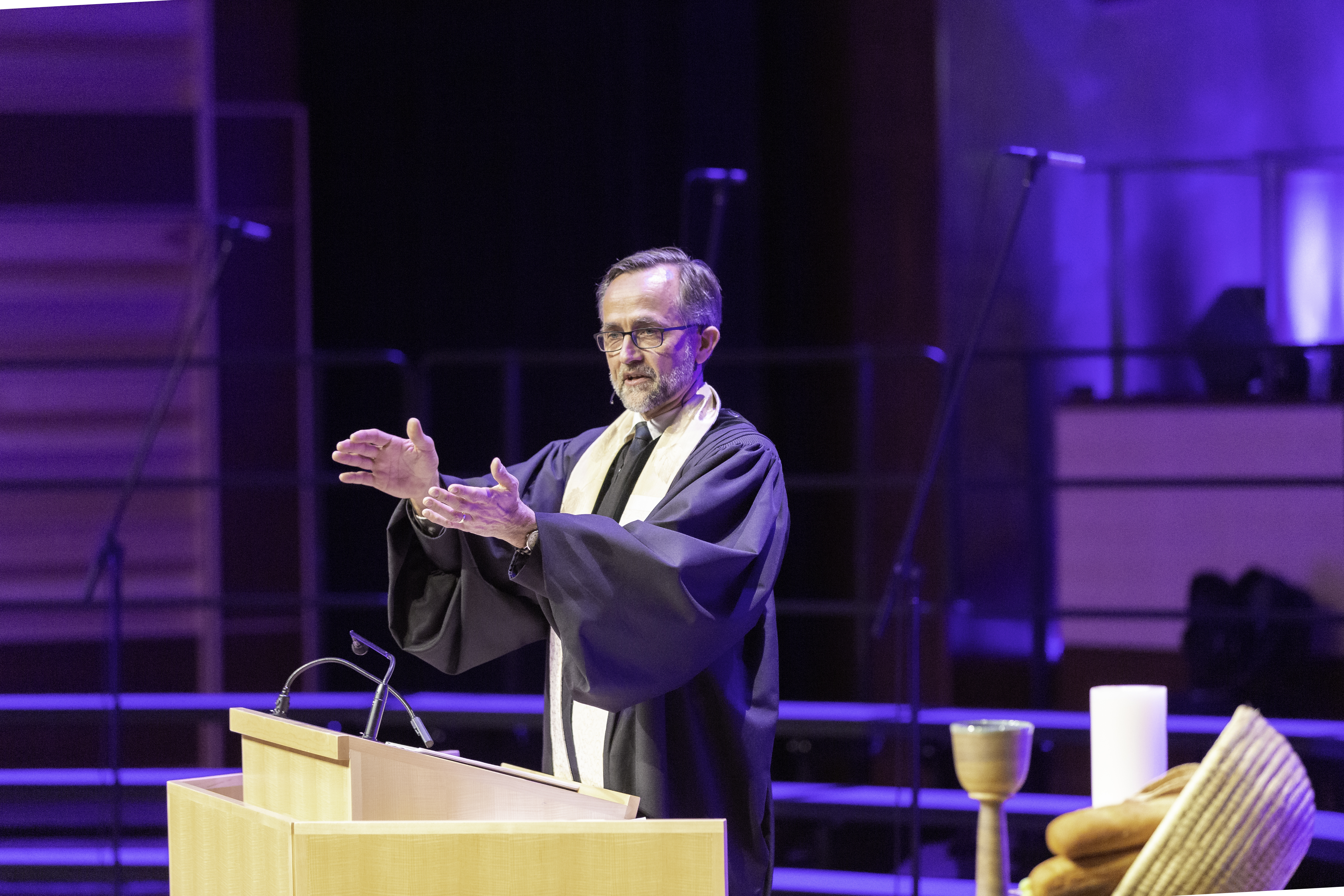 “How do we live in this time of trial?” asked Jonker, who serves as the pastor of preaching at LaGrave Avenue CRC in Grand Rapids. “How do we try to help lead the church? How do we feed our people?”

At the end of 1 Peter, the writer is speaking to an early Christian church that was at the mercy of the Roman Empire and suffering oppression for worshiping a God who wasn’t the Roman emperor. Early Christians were in a time of great distress and opposition, finding their way forward into a new world of faith and belief.

“We need to rise up and oppose the culture around us and become champions of the gospel,” said Jonker.

Symposium organizers had chosen to draw from 1 Peter at all the event’s worship services to offer hope to the church today in its struggles with an aging membership and a society that seems immune to what they have to say. In light of this, some churches are seeking to reimagine how best to present the message of Christ in a fractured world — and 1 Peter can help.

“We need not panic because of the roaring lion,” said Jonker. “We don’t fight evil with evil but always give a testimony of hope.”

Having faith — faith in prayer, faith in one another, and especially faith in God — is how we move through this period of difficulty. The church today, much like the church of the New Testament, is touched and motivated by the Holy Spirit.

“Instead of looking at the lion prowling, Peter wants us to look up to Christ,” said Jonker.

“What the Holy Spirit did in 1 Peter and for the early church, it will do today and when we wake up tomorrow. We know that the grace of God has been with us and will keep on coming. 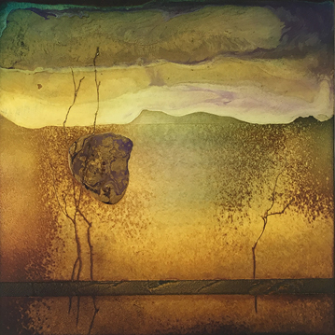 Service of the Word: Living Under The God of All Grace
2020 Symposium on Worship | Closing Service
Read more »