What Makes All Ages Delight in the Psalms

The learning went both ways when two school communities decided to “dwell in the Psalms” for a year. Their Psalms-based creations revealed that the Spirit can work through kids and adults of any age to nourish faith. 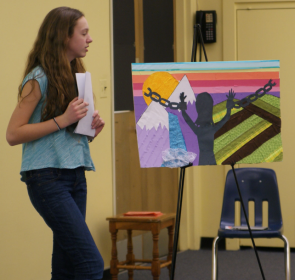 As Christians, we love reading the Bible. At least, that’s what we think we’re supposed to say. But some of us feel defeated when we read scripture on our own. Privately, we wonder whether we need advanced degrees to connect God’s Word with our lives.

If you have similar struggles, then you might be glad to hear what happened when two Christian schools devoted a year to focus on the Psalms. Their explorations opened up imaginative ways for kindergarteners through high school seniors—and their teachers—to share, express and live out the Psalms. What they learned changed the way they worship in both their school chapels and church congregations.

Both projects evolved from experiences at a Calvin Symposium on Worship. “I realized from worship at the symposium that our school’s excellence in fine arts was not reflected in our chapels’ tepid worship,” says Melinda Krpata, who teaches music and plans chapels at Philadelphia-Montgomery Christian Academy, a K-12 school near Philadelphia, Pennsylvania.

Meanwhile, Kathy Hanson had been thinking about asking eighth graders to deliver homilies. She is director of grades 2-8 at Mustard Seed School, a PreK-8 school in Hoboken, New Jersey. Hearing Walter Brueggemann describe the Psalms as offering “an alternative reality” to the “worlds we inhabit” helped Hanson sharpen her focus. Both she and Krpata directed Vital Worship grants (from the Calvin Institute of Christian Worship) that helped their schools “dwell in the Psalms,” as Krpata put it.

Before school began, both Mustard Seed and Phil-Mont staff laid the groundwork to seek new insights from more people.

Mustard Seed staff members read books about the Psalms before their August retreat. Hanson says the reading and retreat set the tone for the staff to think about how God called Samuel, David, Mary and others at young ages. They talked about respecting their students as image bearers through whom God might speak.

As school began, each class read many psalms to choose together which one best fit their class that year. Mustard Seed teachers and staff share responsibility for leading worship every morning (PreK-3) or afternoon (4-8), and most chose a psalm to memorize. They also decided to teach Old Testament stories through biblical songs and psalms, such as the Song of Miriam (Exodus 15), Psalm of Moses (Psalm 90) and Psalm of Joshua (Psalm 106).

At the same time, Phil-Mont held its first-ever chapel team retreat to brainstorm and plan chapel services. “By printing agendas and schedules, we signaled the importance of our weekly meetings, and kids responded in kind,” Krpata says.

At the August retreat, chapel leaders received a list of vertical habits paired with psalms. The vertical habits are simple phrases that help worshipers express emotions to God. For example, asking why? is how we lament in worship, mourning with God that things are not as they should be. Students said they’d worship better and sleep less in chapel if they felt more like a community—so Phil-Mont formed PODs (Psalms on Discussion). The mixed-age staff-led groups met monthly to pray, sing and discuss the monthly psalm and vertical habit.

Betsy Rockey, who teaches middle school language arts, says that using vertical habits and Psalms “kept a unity while we had so many moving parts.” Those moving parts included students from grades K-5 and 6-12 participating in each other’s weekly chapels and inviting parents, grandparents and pastors to take part in chapels, book groups and Psalms for All Seasons “song studies.”

“Experiencing a psalm with young children can make the Psalms come alive for children and adults,” Hanson says. The key, as both schools discovered, is dreaming up many ways for people to engage with the Psalms—this can happen through art, music, movement, spoken word, technology, testimonies and more.

Mustard Seed’s Nest (preschoolers) learned a different line of Psalm 150 each day, along with hearing the instrument for each line they memorized. Hanson says they “squealed with delight” each time the ram’s horn was blown and “could hardly contain their glee” as cymbals clanged.

Launching PODs showed students that adults valued their ideas. “I noticed a small group creating impact on a large one,” Krpata says, explaining how the re-energized chapel team inspired the entire school community. Students memorized verses, created a game show, reported on persecuted Christians and mission trips, gave testimonies and experimented with dance to make psalms and vertical habits their own. Teachers and students learned to pair people with complementary gifts, such as when a shy sophomore wrote an excellent piece on the school’s collaborative art installation and a sixth grade actress read those words in chapel.

“In the last secondary chapel, we asked all students and staff [who had gotten involved in chapel], to stand. Those standing were more than those left sitting,” Rockey says. She adds that Phil-Mont intends to keep its habits of intentionally planning chapels; presenting scripture thoughtfully; using visual arts; and seeking “rich student and staff participation.”

Sharing in worship and life

As both schools plunged into the Psalms, they invited families and congregations to share the joy by attending chapels and other events.

Mustard Seed celebrates Christianity’s Jewish roots every year. At Simchat Torah in early autumn, the school gives each fourth grader a Bible to officially welcome them to studying God’s Word. “This year, as soon as Bibles were put in hands, every fourth grader turned first to the Psalms,” Hanson says.

Mustard Seed hosted a jazz vespers service at a local church and three all-school Psalmfests where adults and youth shared “their” Psalms. “The jazz vespers and Psalmfests were successful beyond imagination. We learned a lot from our eighth grade students about how to properly use video and music as a worship expression,” Hanson notes.

Phil-Mont’s athletic director told Krpata and Rockey that, unlike in previous years, he looked forward to and never missed chapel—in part so he could lead his POD better. He also started a twice-monthly Terrific Tuesdays Prayer and Praise lunchtime for seventh grade boys. Local pastors and worship leaders attended a workshop on reading scripture aloud in worship, led by Jeff Barker, a dramatist, worship leader and professor from Northwestern College in Orange City, Iowa.

Three Phil-Mont parent teams led book clubs. After his book club finished Eugene Peterson’s book on praying the psalms, one grandfather emailed: “This has been an experience I will never forget. My faith has expanded ‘several more universes-worth’ of spiritual understanding. To now say, out loud, ‘Hallelujah,’ has a deeper and stronger meaning.”

Learn more about the Vital Worship grants at Mustard Seed School and Philadelphia-Montgomery Christian Academy. Both schools used or suggested that families use the online devotions Psalms for Families: Devotions for All Ages by Robert J. Keeley and Laura Keeley.

Learn more about the vertical habits that have helped so many churches and schools build their worship vocabulary. The Psalms for All Seasons website suggests multiple psalms for each vertical habit.

Feel free to print and distribute these stories at your staff, chapel, education or worship arts meeting. These questions will help people think about how to involve more people in worship and the Psalms.

The Joy of Being a Child - Psalm 139, Mark 10
The first service plan in a series entitled Chapters of Life. This service focuses on the chapter of childhood. The intent is to speak to children, with children, and to those of other ages about children.
Read more »

Worship Service: Psalm 13
This service of Psalm 13, How Long?, was part of the Calvin Symposium on Worship 2012.
Read more »

Thanksgiving Confession - Unity Christian HS Chapel Service
A high school chapel service plan for Thanksgiving with links to an interview about how this chapel was received.
Read more »