Most pastors realize that people come to church with deep fears, sorrows, and concerns that often remain unexpressed in worship. But because Mount Aery Baptist Church has worked to become a trauma-informed congregation, its worship services are becoming a communal place of healing.

Anthony L. Bennett is lead pastor at Mount Aery Baptist Church, a historic congregation of 900 people in Bridgeport, Connecticut. Bennett recently preached on Leviticus 19:33–34, where God calls us to love strangers and foreigners among us as we love ourselves. Next, as he usually does, Bennett asked, “Did that sermon trigger anything for you?” and invited anyone to speak or request prayer.

One woman said, “Pastor, agents from ICE [U.S. Immigration and Customs Enforcement] came to my daughter’s apartment complex. They made everyone get out. It was very emotional.” Bennett and the congregation prayed for the family, and church leaders followed up with her afterward.

The woman and her daughter are African American, and ICE didn’t arrest anyone that day, the process was nevertheless traumatizing. And the Mount Aery congregation, most of them people of color, understood the women’s fear. “Many black men, including myself, know the trauma of being stopped by police for little or no reason,” Bennett says.

Becoming a trauma-informed congregation means that Mount Aery Baptist teaches people to recognize and talk about multiple traumas and makes space to address trauma in worship and in church policies. Mount Aery models how to heal from trauma by choosing relationships and community, not isolation.

“Initially, people think of trauma as [something like] the physical aftereffects of a car accident,” Bennett says. “But in conversations, Bible studies, and other church settings, we explain that trauma is the emotional, mental, spiritual, or physical impact of and response to violence. That violence may be verbal, physical, spiritual, or cultural. People understand it intuitively, but not fully till we connect it to their life experience and define it as trauma.”

Childhood traumas such as physical, sexual, or psychological abuse or family dysfunction (perhaps because of a depressed, addicted, absent, or abused parent) affect people in every socioeconomic demographic. Many Mount Aery people live in situations that multiply traumatic impacts,  in part because of systemic injustices in Bridgeport, Connecticut’s largest city.

“Bridgeport has huge economic, social, and educational gaps. It ranks among the poorest cities in the United States even though it’s in Fairfield County, one of the most affluent counties in the U.S.," says Nancy Kingwood, a Mount Aery associate minister and the executive director of Mount Aery Development Corporation. Education funding there depends on property taxes, so, because Bridgeport has highly concentrated areas of poverty, poor children attend schools that receive the least funding.

Bennett explains that racism and national cultural norms compound trauma: “In Connecticut and elsewhere, police officers stop black and brown drivers more than white ones. Black and brown suspects are treated differently than white ones, even in TV shows like Law and Order. It’s widely known, so it’s seen as normal. Police who kill unarmed people are rarely convicted. Gun violence here has risen in the last decade, but it wasn’t propelled into national headlines until white children were killed at Sandy Hook Elementary in Newtown. That’s just a 25-minute drive from here.

“Imagine the shared sense of trauma created through a culture, education, and media that inherently values whiteness above other identities,” Bennett laments “Imagine being taught that you’re supposed to respect a president who uses the same racial words, tropes, and reasoning as when white people defended segregation.”

Witnessing or vicariously experiencing tragedy intensifies trauma. Within two years, Bennett’s late daughter by guardianship attended funerals for five young black men. ”She knew three of them and was present when two died,” he says.

Talk about trauma in worship

Bennett describes “a sense in the larger culture that black and brown people don’t have theological conversations.” However, he recalls attending retreats for 150 young black men while serving under nationally known pastor Johnny Ray Youngblood at St. Paul Community Baptist Church in Brooklyn, New York. They talked about questions fueled by grief and loss masquerading as anger. “We’d hear, ‘Why is my skin color the cause of such consternation?’ and ‘I’m angry at God for making me black, making me the target of police brutality.’ That's a theological dialogue,” Bennett says.

He used a trauma-sensitive perspective when preaching on the Levitical command to welcome strangers. He’s sensitive to traumas related to legal status because he’s friends with a local pastor whose congregation is made up mostly of immigrants. That pastor has trained his congregants to know their rights when confronted by ICE. “In the sermon I used the text of actual [search or arrest] warrants and ‘I do not consent to this search’ papers that ICE agents and immigrants slide under doors to each other. After the service, we gave directions on how to talk to the apartment complex manager who might shouldn’t have given permission to ICE to enter,” Bennett says.

In a sermon on Romans 8:31–39, Bennett included a clip from Verizon’s “Love Calls Back” ad campaign to illustrate how nothing can separate us from God’s love. The commercial has four vignettes about the trauma of being rejected for identifying as LGBTQ+.

“My point,” Bennett says, “was that the love of God is stronger than any societal or religiously dogmatic stereotypes that would cause us not to embrace family members or people we have differences with.” The Verizon clip was just an illustration, but it’s what touched three parents who sought him out after the service.

Bennett served on a Vital Worship Grant project team headed by Nancy Kingwood to edify, equip, and engage Mount Aery congregants in a biblical response to trauma. The grant came from the Calvin Institute of Christian Worship.

Bennett and Kingwood, who is also a federal trainer on trauma-informed systems approaches, were panelists for a workshop about worship amid trauma at the 2019 Calvin Symposium on Worship, where Kingwood said:  “Trauma comes up to breathe in the context of worship, but leaders aren’t always prepared. When a church begins to heal itself, it’s important for leaders to acknowledge their own trauma and go through healing. Your church needs a plan and a schedule for educating people about trauma. It has to be in your written policies and budget. You need to develop relationships and a referral process with mental health professionals who understand your lens of faith.”

One such policy at Mount Aery is to declare worship a safe space. Kingwood said it’s good for worship leaders to make eye contact with worshipers. Physical touch can be healing, but not if it’s surprising or unwanted, such as touching someone from behind. Mount Aery clergy work in partnership with the prayer ministry team so that worship is a place of healing. Prayer leaders stationed around the sanctuary look for worshipers who might be experiencing trauma.

“We let people stay in the moment, such as crying or praying at the altar, even it means shortening the sermon,” Bennett told symposium participants. “The best of the historic black church has always made space for healing. In worship we use prayer, songs, sermons, silence, and reflection to process our grief. We also encourage professional mental health counseling and holistic modalities of healing, such as meditation, Reiki, and naturopathic medicine.”

“You cannot heal what you do not address” Kingwood often says. “Unaddressed trauma presents itself as chronic diseases, panic attacks, eating and sleep disorders, and more.”

"You cannot heal what you do not address."
- Nancy Kingwood

Bennett adds, “Trauma cannot always be cured, but people feel cared for when it is addressed. We have a gamut at Mount Aery from people with ultraconservative theological views of gender roles to people who are very welcoming of many concepts. Some people have left because of the way I’ve addressed chemical dependency, gender, sexuality, and racism. Yet I am profoundly grateful for our congregation and its willingness to deal with trauma. It’s made worship more meaningful. People say it’s real.

“Guest pastors tell me they feel so much love and spiritual energy here. We’ve prayed to become a resource church, a safe place for ministers to articulate and express their own trauma and experience—whether personal or vicarious, in their life or ministry. Instead of being just a preacher in a high position, a guest pastor can also be accepted as a person in need,” he says.

Like many black churches, Mount Aery presents the MAAFA Influence experience, a dramatic production about healing from slavery’s effects. Maafa is a Kiswahili or Swahili term for the holocaust of slavery. The drama includes scores of participants and uses music, poetry, dance, ritual, and prayer. The idea began at St. Paul Community Baptist Church in Brooklyn and has since spread to many black churches.

Download free manuals and brochures about trauma-informed care from SAMSHA (U.S. Substance Abuse and Mental Health Services Administration), such as SAMSHA’s Concept of Trauma and Guidance for a Trauma-Informed Approach. Specialized factsheets include “Understanding Historical Trauma When Responding to an Event in Indian Country” and “Understanding Childhood Trauma.”

Learn more about the Sanctuary Model for becoming a trauma-informed community. The Sanctuary Model is an evidence-based, participatory approach for individuals and organizations to develop common language and concepts for recovering from trauma. It grew out of a research team led by psychiatrist Sandra L. Bloom. They learned to think about people with post-traumatic stress disorder, such as veterans of the Vietnam War, as “not sick or bad, but injured.”

The MAAFA experience is meant to help performers and audiences in many countries feel and move through the pain of their shared history of slavery. View brief clips of MAAFA productions at various churches. Bernice Johnson Reagon, who founded the musical group Sweet Honey in the Rock, wrote about MAAFA resources and experiences for the online African American Lectionary. Read Anthony Bennett’s column about finding balance between adversity and achievement during Black History Month.

Anthony L. Bennett and other leaders at Mount Aery Baptist Church band with other churches and organizations in the Do Not Stand Idly By campaign to reduce gun violence. He co-chairs CONECT (Congregations Organized for a New Connecticut), which has changed gun safety standards, curbed insurance rate increases, helped immigrants, and reduced home foreclosures.

To connect with local mental health resources and professionals, Bennett advises talking with social workers in your church, pastors who run social service ministries, your local council of churches, and therapists at community centers. 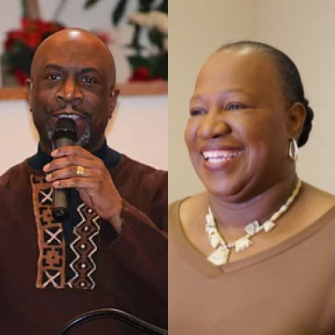 Trauma-Informed Congregations and Worship: Being Made Whole
Becoming a trauma-informed congregation means helping people learn, talk, and grieve about what happened to them. Worship can provide a safe space for people to nurture trusting relationships and accept God's healing grace.
Read more »

Anthony L. Bennett on Engaging Trauma in Sermons
Many urban pastors deal with trauma. Some preach without benefit of pay or formal training. This Baptist church gathered its associate ministers monthly to learn about trauma and exegete Scripture to engage people hungry for healing and justice.
Read more »

Seven Self-Care Tips for Clergy Who Engage Trauma
Clergy and other church leaders called to engage trauma must also practice self-care, or they will burn out and be less effective in helping those who need to address and heal from trauma. These tips help congregants as well, relieving pressure on clergy and church leaders.
Read more »