In the new First Nations Version of the New Testament, Terry M. Wildman translates the good news about Jesus, Creator Sets Free, into cadences and concepts that resonate with indigenous First Nations people.

Terry M. Wildman is a pastor, author, and director of spiritual growth and leadership development for Native InterVarsity. He and his wife, Darlene Wildman, form RainSong, a Christian music duo that writes and records songs with Native American influences. In this edited conversation, he talks about translating the forthcoming First Nations Version (FNV) New Testament (InterVarsity Press, 2021).

Why is this translation called the First Nations Version?

The term “First Nations,” while mostly used in Canada for the original inhabitants of the land, is increasingly being accepted and used by many Native Americans in the US and by Indigenous peoples worldwide. Following this trend, the name First Nations Version was chosen for this translation. The FNV is not a word-for-word translation; rather, it is a thought-for-thought translation, often referred to as a “dynamic equivalent.”

Why do Native Americans need an English translation?

It is conservatively estimated that over 90 percent of First Nations people do not speak their tribal language, and even fewer can read it. This is the result of several generations of governmental assimilation policies that attempted to eradicate over 250 languages spoken in North America. Although there is now a trend to teach the languages through schools and communities, without the first language speakers (elders) to bring out the deeper background to the meaning of words, much of these languages’ richness is still missing.

There’s such variety in First Nations peoples’ original languages, culture, history, and geographical settings. What commonalities did you draw on in translating the FNV New Testament?

Even though Native cultures and languages differ, many commonalities have developed through years of cultural exchanges at intertribal gatherings. Most tribes participate in modern powwows and have adopted intertribal regalia and songs. Several books about Native elders such as Chief Joseph, Black Elk, and others have been written or translated into English. We used many of these early translated expressions in the FNV. For example, Black Elk often spoke of prayer as “sending his voice to the Great Spirit,” so we used that expression many times in the FNV.

Given that your translation is in English, what makes the FNV resonate as a heart language?

The most appreciated part of the FNV has been the using the meaning of biblical characters’ names. Just as in Hebrew culture at the time of the New Testament, names have always had special meaning in our Native cultures. So the FNV refers to Jesus as “Creator Sets Free,” Abraham as “Father of Many Nations,” and Peter as “Stands on the Rock.” We used several biblical resources to come up with the translation of each biblical place and name, and we put the standard English name in parentheses. You can download a full glossary of all the names from the FNV website.

We also used words and concepts more relevant to a traditional Native worldview. “Temple” became “Sacred Lodge”; “sin” became “bad hearts” or “broken ways,” depending on the context. “Angel” became “spirit-messenger,” “apostle” became “message bearer,” and “Christ” became “Chosen One.” These are only a few examples of our attempt to connect to the traditional way Natives first spoke in English. More than one Native elder has said, “You translate it into English the way we think it in our language.” A young Canadian Native told us that reading the FNV sounded like his grandpa telling stories at the breakfast table.

How did you get the idea to translate the New Testament?

In the early 2000s, my wife and I lived on the Hopi Reservation, where I pastored a small American Baptist mission church. I learned a lot from talking with village chiefs and being invited into a kiva with Hopi elders. One chief told people to visit our church, which was about 90 percent Hopi. No one could read their Hopi Bibles because they didn’t know the language. I began rewording scripture and got such good feedback.

As RainSong, Darlene and I traveled to different churches and reservations. We’d sing songs based on my scripture rewordings. She’d play the wooden flute, I’d read verses, and people would ask, “Where can I find that translation? Your version helps me see how Creator and the Great Spirit connect us with being Native.” For years I resisted writing a whole New Testament translation because I didn’t feel qualified. But about ten years ago, at a seminar on healing between people groups, people surrounded me in prayer, and I stopped resisting God’s call.

God gave me the credibility through the people God provided. I self-published Birth of the Chosen One and When the Great Spirit Walked Among Us. Both explain the gospel using Native concepts and storytelling styles while remaining faithful to the original language of the New Testament. On April  1, 2015, I was at my computer working on translating Matthew, and I got an email from the CEO of OneBook in Canada. He’d found me through a web search and asked whether I knew of any needs for Native people to have Bible translations or updates. OneBook’s philosophy is that Indigenous people should be the translators, and the professionals should support them.

OneBook provided funding and Paratext Bible translation software and tech support. Wycliffe Associates helped fund meetings for a group translation process. Wycliffe has identified nearly 200 words that are most important in the New Testament. So we began by having five FNV Translation Council members decide how we’d translate those words. The FNV includes a glossary explaining how we chose to translate certain words.

For the last two years or so, Native InterVarsity has been using the FNV portions already in print for gatherings, Bible study, and personal devotional reading. Students have come to faith through reading the FNV. Four Native Intervarsity staff joined our review team and have reviewed about twenty books of the New Testament. This led to the connection with InterVarsity Press.

Can you give examples of changes you made as a result of the group translation process?

Since I’d developed a specific style over the years, our council decided that I’d write the translation and the council would give feedback. The whole process took about five years. In all, we used about 90 percent of suggestions for change. We translated the word for “church” as “Sacred Family” because of the more relational picture it paints of the body of Christ, which is very culturally important to Native peoples. We changed “bread” to “frybread” in a few places where it seemed appropriate. It took a while to settle on how to translate “kingdom of God” because of the EuroAmerican connotations of king and kingdom. The book Spirit and Resistance by American Indian theologian George E. Tinker helped us settle on translating “kingdom of God” as “Creator’s Good Road.”

How many different tribal heritages were involved in the FNV?

When will InterVarsity Press release your complete FNV New Testament? How similar is it to your earlier FNV portion releases?

IVP is aiming for July 21, 2021. There will be both a paperback version and a deluxe hardcover version. Other than a few words here and there and a change in a few translated names, the FNV New Testament will be exactly the same as our previous portion releases.

As RainSong, over a period of twenty years, Darlene and I have written and recorded more than forty songs that have Native American influences. The wording used in these songs was invaluable in laying a foundation for translating the FNV. Also, in 2004, Darlene and I (RainSong) participated in a Calvin Institute of Christian Worship grant called Emerging Voices.

Will you write an FNV Old Testament?

I’ve been praying about whether to tackle the Old Testament, or at least Genesis, Psalms, Proverbs, and maybe some prophets. I can reach out to experts such as L. Daniel Hawk, professor of Old Testament and Hebrew at Ashland Theological Seminary in Ashland, Ohio. Also, I’ve explained that the FNV has an intertribal style. Maybe God will call a Lakota or Apache person to translate scripture in their style. 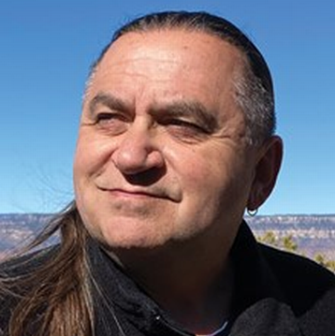 Indigenous Christian Worship Resources: Where to Start
Many congregations are beginning to realize that they live, work, and worship on land taken from Indigenous people. Learning about First Nations and Native American Christians can help worshipers from other cultures see the gospel with new eyes.
Read more »

Understanding Differences in Bible Translations
God designed the gospel to be translated into every language. English speakers have created hundreds of Bible translations, versions, and updates. Here’s help for finding blessings in the bewildering variety.
Read more »