When U.S. artists and Chinese artists traveled together in China, they learned the unique challenges of expressing Christian faith through the visual arts in each other’s contexts.

Joel Carpenter is the director of Nagel Institute for Study of World Christianity at Calvin College in Grand Rapids, Michigan. He co-led a summer seminar that resulted in a traveling art exhibit. In this edited conversation, Carpenter talks about the differences between social freedom and artistic freedom to infuse Christian spirituality into visual art.

Could you briefly describe the Matter and Spirit seminar and art exhibition?

Matter and Spirit: A Seminar on Contemporary Art and Chinese Society was a Nagel Institute summer seminar that brought together ten U.S. visual artists and ten Chinese visual artists in Beijing, Shanghai, and Nanjing. We did the same thing in South Africa (2013) and Indonesia (2008). The goal is to help Christian artists in Western and non-Western cultures see their faith and artistic languages in new ways. In response to the cross-cultural seminar, artists create a traveling exhibition.

In summer 2018, Rachel Hostetter Smith and I led the seminar in China. Rachel teaches art history at Taylor University in Upland, Indiana, and she curated the resulting Matter + Spirit: A Chinese/American Exhibition.

How did you find Christian artists in China?

Rachel and I have both developed relationships with Christian scholars and artists in China. These connections helped us find and recruit Christian artists throughout China. Some teach, others run galleries, and they have formed regional networks. Some are quite distinguished, and they play important roles within a rising Chinese Christian intelligentsia.

The Nagel Institute promotes a deeper understanding of global Christianity. How has this demography changed in the last 100 years?

What new questions do these changes pose for Christian thinkers and artists?

We might wonder who the average ‘normal’ Christian in the world is today. Maybe it’s a lady in Peru or Brazil. We might question the Christianizing influence of colonizers. It was predicted that Christianity would decline when colonizers left, but Africa now has more Christians than North America. Pew Research Center forecasts that by 2060, 40 percent of the world’s Christians will live in sub-Saharan Africa. Catholicism is growing rapidly in Africa and Asia, especially in places where it wasn’t part of colonial regimes. Catholicism is growing faster than Protestantism in Kenya and Botswana. It leads you to think that colonialism was impeding Christianity.

How open is China to Christian artists?

The contemporary art scene in China is flourishing. Between 1990 and 2008, Beijing went from having zero to 300 private art galleries. Museums and universities run trendy exhibitions, and Chinese artists show up in major exhibits in America and Europe. Meanwhile, since the 1989 Tiananmen Square protests, there’s been a major turn toward Christianity among professors, lawyers, business executives—and artists.

Christian art in China is part of this growing intellectual movement. Christian artists there are passionate about injecting religion into art, and they’re very much part of the discussion about what it means to be Christian in China. However, they can get in trouble if their work is perceived to be political, because the government is worried about Christians (and Muslims), scholars, and artists. One Chinese artist who was supposed to be in our seminar couldn’t participate because his unregistered church was raided.

What’s the same and different in how American and Chinese artists try to convey Christian faith through their art?

We chose the matter and spirit theme because artists in both cultures are struggling to evoke spiritual insights in highly materialistic cultures. In the West, artists operate in a post-Christian environment. They have social freedom to use religious images, but there’s such a long tradition of Christian art, that many scholars and artists feel these images have lost their currency. Pictures of Jesus or religious expression through visual arts is seen as clichéd in the high-end art world.

However, in China, Christian artists are taken seriously in the high-end art world. Because Christianity is a minority religion in China, artists who inject faith are seen as exercising artistic freedom to dissent. The traditional Daoist style of painting tends to dwarf humans and make nature larger than life. So when Chinese artists include cruciform shapes, a crown of thorns, Moses at the Red Sea, or Jesus being fired upon by Mao, it’s seen as interesting and provocative.

Much of Christian visual art in China is kind of dark, because it points out how people suffer emotionally, mentally, and physically despite China’s growing economy. There’s also a growing social disparity in this “wonderful new world” of China.

What did the U.S. artists and Chinese artists learn from each other?

The artists spent a lot of time pulling up slides of their work and talking about it. We noticed that Chinese artists have excellent classical training in drawing, composition, and painting. Discussion wasn’t easy or simple. We had to do everything through interpreters, so it took a while to get to know each other. Everyone roomed with someone from the other country. The Chinese artists kept using the term “holy-ism.” One fellow and I had quite a discussion about it, texting through Google Translate. We finally figured out that it meant “Christian worldview.”

Also, before we arrived in China, we had been advised to talk about art in academic ways and not talk about faith, so as not to get Chinese artists in trouble. So the American artists focused more on artistry, strategy, and academic exchange, and less on their spiritual inclinations. We thought the Chinese artists would be cautious too. But they were absolutely outspoken about faith. Toward the end of our time, they told us, “We thought you were mainly secular, just like so many artists we run into in the U.S. and Europe. But now we see that you’re real Christians after all.”

How well did the Chinese artists know each other before this seminar?

Some knew each other already, but others met for the first time. We confirmed what we’d heard before our trip, that there’s a sharp strategic rift among Chinese Christian artists. Conceptual artists push themes of justice, mystery, transcendence, and power. They care about incorporating ancient Chinese artistic themes, materials, and moods into their work. Those who prefer representational art think that Western traditions of portraiture, especially in Northern Renaissance art, have a lot of soul, because they poignantly reflect on the human condition in ways that traditional Chinese art, particularly Daoist, never did. Representational artists see their work as reflecting Christian values of order, beauty, and human dignity. We had both types in our group, and they debated vigorously.

Can you share what artists have said about a few images from the forthcoming Matter + Spirit: A Chinese/American Exhibition?

Dao Zi, a professor at Tsinghua University in Beijing, is an internationally known artist, critic, and author. He often infuses Christian elements into traditional Chinese ink painting. He says that in “Light of the Sea,” the wave is the texture and color of prison clothes, but the spray evolves into a candle. This painting is one in a series of works about the late Liu Xiaobo, who was a Nobel peace prize winner and Dao Zi’s friend. The artist says his recent theme of “artistic creation has been about martyrdom, suffering, salvation and hope…. In spiritual life, we cannot despair because of the persecution by the world and our own mistakes and sins, because the passing of time is not a closed one.”

Brenton Good is a painter and printmaker who teaches art at Messiah College in Mechanicsburg, Pennsylvania. He created this “gridded painting of yellow gold hues” while “reflecting on the time spent at the Nanjing Memorial.” The memorial commemorates a 1937 massacre after the Japanese army captured Nanjing. Good said he chose this painting’s “hue from all of the gold-leafed objects viewed throughout our travels in China.”

Lauren Schiller, who teaches fine arts at Seton Hall University in South Orange, New Jersey, publishes often, and her work is widely exhibited. She said she’s “interested in how we express our spiritual needs materially through the use of ritual objects in shrines, altars and other sacred spaces.” Her ideas for this painting came from reading pre-assigned Matter and Spirit readings, such as Religion and Material Culture edited by David Morgan, The Souls of China: The Return of Religion After Mao by Ian Johnson, and Wild Swans by Jung Chang. She said that, while in China, she was moved by seeing how people express their (often newly-adopted) spiritual faith through public and private rituals, temple worship, and church attendance.

You Yong is an affiliate painter and curator at the Chinese Academy of Oil Painting in Beijing. In this oil painting on a wood panel, the nail-marked hand belongs to Jesus. Yong said, “I tried to paint a portrait of my life in the hands of Jesus.”

See Matter + Spirit: A Chinese/American Exhibition at the 2020 Calvin Symposium on Worship.

Learn more about the Nagel Institute’s Gospel and Culture Seminars. Read about challenges of Christian churches in China. Check out this worship resource guide on faith and citizenship. 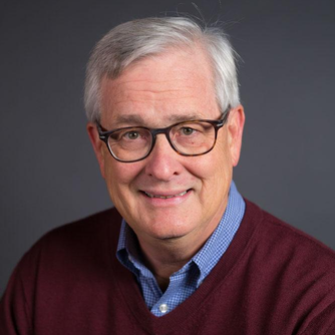 William A. Dyrness on Visual Imagery in Worship
These video excerpts come from a conversation between William A. Dyrness and John D. Witvliet at the annual Calvin Institute of Christian Worship—CICW—grants colloquium in June 2019.
Read more »