How to Adapt Race, Class, and the Kingdom of God to Your Setting
Join our mailing list

How to Adapt Race, Class, and the Kingdom of God to Your Setting

Arrabon’s Race, Class, and the Kingdom of God curriculum can be adapted to church and school contexts with varying memberships and time constraints.

By the summer of 2019, more than 150 small groups in congregations and schools across the United States had used Arrabon’s Race, Class, and the Kingdom of God (RCKG) study series. Some used just RCKG 101; others also did RCKG 201.

Based in Richmond, Virginia, Arrabon is a Christian ministry that helps communities effectively engage in reconciliation. Besides curriculum, it offers workshops, Urban Doxology songs and concerts, a summer songwriting internship, and a documentary film.

The first course, RCKG 101, includes videos, workbooks, and recordings from the band Urban Doxology to foster safe, authentic conversations about culture and race. The 201 content helps communities practically apply the knowledge and language they learn in 101.

Arrabon has been tweaking the courses based on user feedback. People who’ve gone through RCKG in their churches or colleges say it’s easy to customize course content for different contexts.

Arrabon staff members David M. Bailey and Brooke Winters Wright say that groups often report it’s easy to lead a class because “nobody has to be an expert.” Leaders need only a good internet connection to stream the video, printers to print the workbooks, and, Bailey says, “willing participants to have a substantive Christ-centered conversation on reconciliation.”

Stacia Hoeksema is a Calvin University social work professor who volunteers at Madison Square Christian Reformed Church (CRC) in Grand Rapids, Michigan. She led RCKG 101 with Laura Pritchard, who served for many years as Madison Square’s director of diversity.

“It’s part of our congregation’s mission and vision to care about race, justice, and kingdom issues,” Hoeksema says. “Laura and I put a lot of energy into being CORR (Congregations Organizing for Racial Reconciliation) trainers, but we wanted something more accessible to people who don’t have a whole weekend available. We offered RCKG 101 as a two-hour adult ed option during our Wednesday Night Out program, which also includes programming for children and youth.

“This is great for people just entering the conversation. It mixes different kinds of people together for watching videos, reading workbooks, listening to or singing music, and talking together. We also included a fifteen-minute hospitality time, and everyone took turns bringing a snack or dessert,” Hoeksema says. She’s confident that people who took RCKG at Madison could lead the next 101 class there.

Compared to other reconciliation studies

Hoeksema believes RCKG is “a better starting place or on-ramp for people just dipping their toes into racial discussion. Yet it’s still useful for those who’ve gone through more intensive anti-racism training such as CORR, Crossroads Anti-Racism Organization and Training, DORR (Dance of Racial Reconciliation), or Framework for Anti-Racism and Racial Reconciliation.

“I’m a social worker who cares a lot about matters of justice and racism and faith,” Hoeksema explains. “I think CORR’s way of laying out racism in a historical context is very helpful, as well as its examination of institutional racism and internalization—all within a faith context. Yet I appreciate how RCKG’s approach is biblically and theologically grounded. It helps you look at the arc of Scriptural stories and more intentionally examine socioeconomic class differences than other programs do. It asks you to think about this question: ‘How does sin impact me and the way I function in my organization?’”

“Todd and I were very comfortable laying out the biblical patterns of reconciliation, because that is typically missed,” Curry says. “People often speak about reconciliation, but the word itself is not understood. RCKG emphasizes that, first, we have been called to reconcile to God. Then we are called to be God’s agents and ambassadors of reconciliation in the world. We looked at key passages, such as Matthew 5–7; 2 Thessalonians; and 2 Corinthians 5.”

Leaders note that class discussions are most fruitful if class members are culturally different. Though the Messiah College group was open to anyone on campus, only students signed up. However, this dozen included first-year and upperclass, domestic and international, rural and urban students. A third were people of color (POC). “It was really helpful for students to tell their own stories,” Curry says.

At Madison Square CRC, those who signed up first were predominantly white, so Laura Pritchard did one-on-one invitations to church members of color. The class ended up about half white, half POC—more diverse than the congregation’s average Sunday attendance.

Emily Snider Andrews teaches church music and worship leadership and is a fellow at The Center for Worship and the Arts at Samford University in Birmingham, Alabama. She found that meeting at lunchtime worked best for most people. Because Samford is a majority-white institution, Andrews went beyond the target group of faculty to enrich discussions.

Kafi Carrasco was new to Village Church in Portland, Oregon, when lead pastor Ken Wytsma asked her to co-lead RCKG with a Chinese-American friend who’d been at Village for years. They did the study as part of weekly meetings for the nearly twenty church staff, including administrative and maintenance workers.

People who’ve led RCKG agree that it works best with more than an hour available per session—ideally 75 to 120 minutes. But that’s not possible everywhere, so leaders make do.

Carrasco says her group had only about forty minutes per week together. “We spread the material over ten weeks and asked people to watch the videos ahead of time,” she says. “They were very faithful about watching. I’d pick two or three questions per time from the workbook. We listened to all the Urban Doxology songs at the end.”

Later, Carrasco adapted RCKG 101 as an all-day session for fifteen to twenty Life Group leaders at Village Church. “In one day, it’s a richer conversation, because you’re going into that space together, whereas in forty minutes, just when you’re ready to go deep, you have to stop,” she says.

The Samford University group completed RCKG 101 in six sessions but met a seventh week to complete ongoing conversations. “We addressed questions in workbooks but didn’t often use the workbooks themselves. We listened to Urban Doxology songs twice. Time was short, and our group wanted conversation” Andrews says.

However much time you can spend per session, consistent attendance is key, according to Janice McWhertor, a retired minister of congregational outreach at Church of the Servant (COS) CRC in Grand Rapids, Michigan. She and Victoria Proctor Gibbs hosted a group of women from various churches, ages, and races.

“We did the course in six sessions, used the workbooks, and listened to and appreciated the Urban Doxology songs. It’s a challenge to find people who will be in town and can commit to six or seven weeks. But because of the intimacy this study can create, consistent attendance is important to build trust,” McWhertor says.

Group leaders at Madison Square CRC, Village Church, and Messiah College admit to feeling some frustration that RCKG 101 focuses more on cultural differences than racist systems. (RCKG 201 deals with anti-racism.) They wanted to stretch people, and class members sometimes wanted to grapple with issues in the news. So leaders added content relevant to their groups.

At Messiah College, Thursday chapel sessions offer the chance to attend large-group chapel or to join a six-week small group devoted to a book or topic. The RCKG 101 class was one such option. “We only had 45 minutes per session. The 101 topics were not unfamiliar to students, because the college in general has already laid biblical foundations for reconciliation. It’s ‘in the water’ here. We needed a little more heavy-hitting material, so Todd Allen supplemented the 101 material with current news clips,” Curry says.

Several sites reported that their best conversations happened during or after their university or congregation offered another Arrabon element attended by more people. They advise introducing or pairing RCKG classes with one or more of these: performances and conversations with Urban Doxology; hosting an Arrabon speaker or live Arrabon workshop; or screening the documentary 11AM: Hope for America’s Most Segregated Hour.

After Hoeksema and Pritchard added content to make the connection from culture to systemic racism, Madison Square CRC class members began brainstorming about how to extend the learning.

“Even when we offer RCKG 101 or 201 as an adult ed option, we know that not everyone will take it,” Hoeksema says. “We started talking about how maybe everyone should write a letter to the pastors or elder chairs to say how the class has impacted them. Perhaps we could ask them to make more room in worship for lament. Maybe there’s a way to use parts of this content in sermons so wider audiences could hear about biblical reconciliation.” 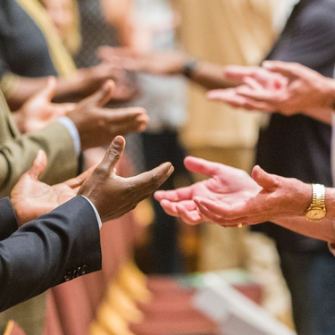 Becoming a Reconciling Community
In this workshop, we focused on what it looks like for a church to be committed to racial reconciliation for the long haul and offered five foundational practices for becoming a reconciling community.
Read more »