Lay training in both formative and expressive liturgy helps Catholic adults and youth live out their identity in the universal priesthood of all faithful believers. Protestants can learn from this. 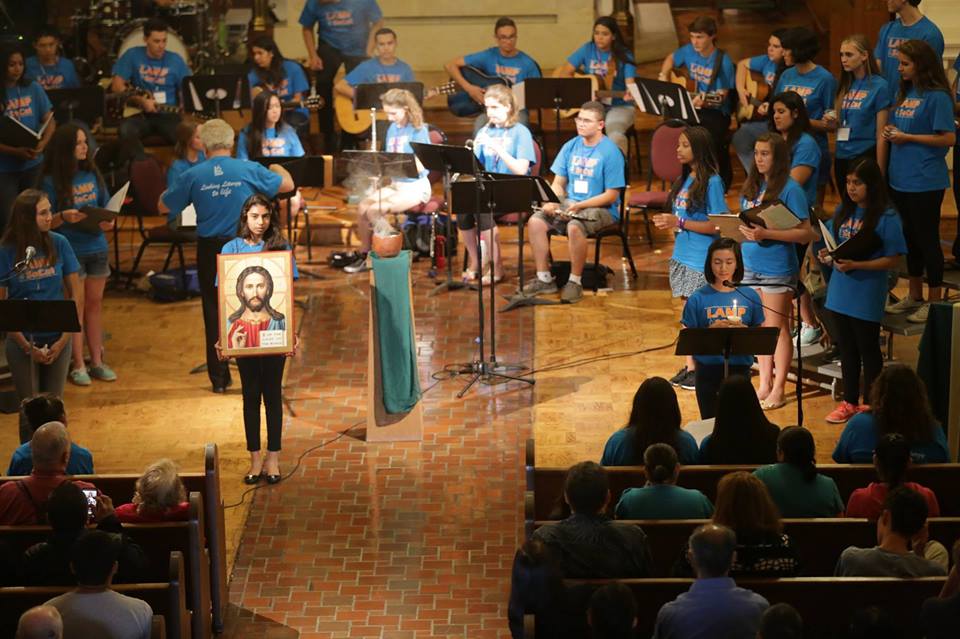 Some Protestants stereotype the formative quality of Catholic liturgy as “dead ritual.” Meanwhile, Protestants who value expressive worship are sometimes dismissed as “consumer oriented.” But in the run-up to the 500th anniversary of the Protestant Reformation, more Catholics and Protestants are learning and borrowing from each other.

After meeting Pope Francis, evangelical megachurch pastor Rick Warren referred to him as “our new pope.” In a speech in Philadelphia for the world’s largest gathering of Catholic families, Warren said that both Catholics and Protestants need to “evangelize the lost and…reenergize our families.”

Cardinal Sean O’Malley of Boston is working with his Lutheran counterpart, Bishop James Hazelwood, on joint 2017 Reformation anniversary events, such as discussion groups on the pope’s June 2015 encyclical on climate change and the environment.

And in 2015, the National Association of Pastoral Musicians (NPM) honored John Witvliet, director of the Calvin Institute of Christian Worship, for making “a significant contribution to the worship life of Catholics in the United States.” In his NPM address, Witvliet praised Catholic insistence on “the formative value of liturgy.” He said, “The formative discipline of psalm recitation becomes the occasion of a profoundly expressive prayer….We pray formatively to ‘plant the seeds’ that will be ‘harvested’ in our expressive prayer, faithful Christian witness and service to God and each other.”

Two new Catholic lay training programs in Las Vegas and Los Angeles illustrate how, in Witvliet’s words, “ritual can create the context for expressivity.” Both are funded, in part, by a Vital Worship Grant from the Calvin Institute of Christian Worship. And both have led Catholics of all ages to see more profoundly how being baptized can shape their lives.

Why they do what they do in Mass

High demand surprised and delighted Carey Roybal-Benson when the Diocese of Las Vegas, Nevada offered a two-year liturgical certification program for Catholic lay leaders. He belongs to St. Elizabeth Ann Seton Catholic Church, a 10,000-family parish, and he is principal of the parish school.

“We learned not to underestimate the thirst for knowledge of the community of the faithful. We had hoped to enroll 20 to 25 people but had to cap enrollment at 55 people from eight parishes,” Roybal-Benson says. He was the project director but also sat in as a student.

Participants ranged in age from early 20s to upper 70s and included lay ecclesial ministers, ordained deacons and ordained ministers. They met on 17 weekends for Friday-night-to-Saturday sessions designed to help them understand Catholic liturgical, scriptural, historical and cultural heritage. Speakers came from all over the U.S.

“Developing a greater understanding of our liturgical heritage and practice is of paramount importance. Each class had ample opportunity for discussion for all participants. We talked about how we intended to implement what we were learning and how we’d instruct coordinators and people involved in our lay ministries.

“As a Catholic school principal, I now have a fuller appreciation for and understanding of why we do what we do. This has helped me be more effective. Our pastor, who was also on the grant team, made himself available to provide several staff development sessions with our teachers on similar topics, such as the liturgical year, parts of Mass, Eucharist and baptism. That helped the teachers be more effective in instructing our kiddos.

“We restructured how we teach psalms in school so students can more actively and consciously participate during our school Masses. Our parish director of liturgy felt that, pastorally, it would be great for the children to sing and commit to memory important snippets of these psalms. Singing a different psalm refrain each week would be too much for them to learn. We want the children to be able to sing refrains from memory both in church and in everyday life.

“The church has given us common psalms to use throughout the liturgical year, with 22 psalms in the middle of the lectionary. When children learn a refrain—such as from Psalm 27 (‘The Lord is my light and my salvation’) or Psalm 34 (‘Taste and see the goodness of the Lord’)—then they take ownership of being able to sing scripture. To make this a reality, our parish director of liturgy would teach the refrain to the students ahead of time in music class. We also preprinted all psalms we’d use onto card stock and put them on all classroom prayer tables, so children could practice and sing it as part of their daily prayer,” he says.

Dale Sieverding knows from personal and professional experience how meeting like-minded young Catholics can change lives. “I grew up in a South Dakota farming community and started playing organ in our church at age 13, when my sister went to college. When I was in high school, I went to a 10-day summer camp in Wisconsin. Being there with other young people who were excited about being Catholic and being musicians gave me confidence, a vision and a sense of vocation,” he says.

Sieverding is now director of music and liturgy for Saint Monica Catholic Community in Santa Monica, California. For 15 years, an entertainment professional from the parish donated funds to send students to the Music Ministry Alive summer camp in Minneapolis, Minnesota. “Of those approximately 60 students, probably seven now earn their living in church music ministry, and many of the rest are musical pillars here or in choirs and on liturgical committees in other parishes.

“But very few parishes in the Archdiocese of Los Angeles have the wherewithal to fly kids to Minneapolis for a summer music camp,” he says. “Some parishes don’t have money to pay for musicians and so they depend on volunteers. If we don’t start training kids in music and liturgy here, then who will strengthen the liturgical life of the parishes in the dioceses of Southern California?”

He helped found LAMP So-Cal—Liturgical Arts Ministry Project in Southern California—as a five-day residential summer camp for high school students. It’s for musicians and non-musicians. In fact, a quarter of the kids came to learn more about liturgical ministry through art or dance or as a lector, sacristan, acolyte or liturgical prayer leader. In 2015, there were 44 teens from 20 parishes and three Catholic high schools. Sieverding is aiming for 75 students from 40 parishes in summer 2016.

“We helped kids understand the impact of different ritual choices. Our vision was that they would gradually take over roles in liturgy. Adults mentored kids to give reflections on the scriptures. One young man described Eucharistic adoration ‘like God reaching his hand out to us.’ His words touched a lot of students and team members,” Sieverding says.

A student who came as a drummer discovered gifts as a cantor and has since sung the responsorial psalm at church. A young woman gifted in art designed the camp’s logo. Someone coached as a lector wrote about “forever proclaiming, no longer just reading” the Sunday lectionary. Another student wrote that the camp “inspired me to focus more on the liturgy itself when I return to my parish. Liturgy itself is life given to us by God…celebrating it well will develop us into ministers and disciples of Christ.”

The week ended with a liturgical arts festival led by students and formatted as a walk through what they’d experienced that week, including Taizé prayer, evening prayer, fun time, Eucharist, story, procession, poetry, music and art.

Now some camp graduates are helping plan the February 2016 Youth Day expected to draw 16,000 youth to Los Angeles. Those sent by Catholic high schools are using their skills in campus ministry—for chapel, seasonal liturgies and retreats. “St. Agatha, a church in a tough neighborhood in downtown LA, is now using camp graduates on its music and liturgy committees,” Sieverding says.

Roybal-Benson says the liturgical certification program in Las Vegas strongly influenced participants to think about their identity as baptized people. “We were always sharing in class about how, through our baptism, we hold the offices of prophet, priest and king. Now I ask myself how, as a priest, am I praying for others and caring for the sick. I ask myself how, as a prophet, in my roles as principal and lay minister, am I looking for opportunities to be hospitable, to be Christ to others.”

Eagerness to live out his baptism led Roybal-Benson to pay to sign up for a new two-year scripture program in the parish. “Our liturgical certificate program was so popular that 120 people signed up for the scripture program. It’s led by Catholic scholars. The first year is on the Old Testament. So far, the main emphasis has been on Genesis and the prophets. We’re learning how to crack into scripture and better situate what we hear and read in both its original context and its place in salvation history,” he says.

You can read or watch John Witvliet’s keynote speech, “Liturgy in the Context of Joy and Sorrow” (begins at 6:25), given at the 2015 National Association of Pastoral Musicians convention.

Learn more about the Vital Worship Grants Program and the projects for the liturgical certification program in Las Vegas, Nevada, and the liturgical arts summer youth camp in metro Los Angeles, California.

Test for yourself how doing the Liturgy of the Hours or another form of fixed-hour prayer can deepen your ability to express your faith.

Read a conversation with Dale Sieverding on cultural differences in recruiting youth. Connect with Liturgical Arts Ministry Project in Southern California (LAMP So-Cal) on Facebook and Instagram. Camp leaders used For Ages Unending: The Ministry of Liturgy with Adolescents to mentor and coach youth. The book has both English and Spanish texts.

Sieverding is director of music and liturgy in a parish with 120 ministries. The liturgical ministry has 600 volunteers, and 170 hospitality ministers gather quarterly “to make sure St. Monica Catholic Community is a place where all feel welcome,” he says. His liturgical committee has come up with an idea to use a formative ritual to strengthen how volunteers and lay leaders express and live out their faith. Pope Francis has announced a Holy Year of Mercy. Sieverding proposes that, whenever they meet, all ministry teams will pray a prayer that Pope Francis wrote and briefly discuss what mercy means in their ministry.

Feel free to print and distribute these stories at your staff, board, liturgy or worship meeting. These questions will help people start focusing on how they can worship more fully, consciously and actively:

From the Inside Out: Guiding Adolescents in Worship Leadership
A discussion-based workshop to work toward establishing a framework for shaping the habits, practices, and formation of young worship leaders.
Read more »

Why Youth Need to Be Leading Worship Regularly NOW
When congregations empower teenagers to use their gifts in meaningful ways over time, teens are more likely to imagine themselves as faithful disciples and devoted worshipers for decades to come. Two summer programs in worship, theology, and the arts inspire teens and mentors.
Read more »