This choral reading of Nehemiah 4 is adapted for 6 speakers

(During the following six sections of text, tableaus are formed to suggest the action of the reading.

Prevalent from beginning to end are ensemble members in tableau representing Sanballat, Tobiah and the army of Samaria.

Throughout Sections 1-4 the wall is being built out the bodies of the Scripture Arts Team. However, the poses they strike allow for holes in the structure. It is clear the wall is not complete at the end of Section 4.

Though the wall is now filled and presents a solid structure, the poses of the ensemble members will be choreographed to show comradery, solidarity, love and support. Perhaps some are holding hands, some are hugging, and others are physically supporting others. In this manner the wall is de-weaponized and portrays the act of the Israelites – though inferior in numbers and military capability – coming together to depend upon God for their salvation against their enemies. )

SECTION 1: THE NATIONS MOCK US

Speaker 1: Now when Sanballat heard that we were building the wall, he was angry and greatly enraged, and he mocked the Jews.  He said in the presence of his associates and of the army of Samaria, “What are these feeble Jews doing? Will they restore things? Will they sacrifice? Will they finish it in a day? Will they revive the stones out of the heaps of rubbish—and burned ones at that?”  Tobiah the Ammonite was beside him, and he said, “That stone wall they are building—any fox going up on it would break it down!”

Speaker 2:  Hear, O our God, for we are despised; turn their taunt back on their own heads, and give them over as plunder in a land of captivity.  Do not cover their guilt, and do not let their sin be blotted out from your sight; for they have hurled insults in the face of the builders.

SECTION 3: THE WALL IS BUILT

Speaker 3: So we rebuilt the wall, and all the wall was joined together to half its height; for the people had a mind to work. But when Sanballat and Tobiah and the Arabs and the Ammonites and the Ashdodites heard that the repairing of the walls of Jerusalem was going forward and the gaps were beginning to be closed, they were very angry,  and all plotted together to come and fight against Jerusalem and to cause confusion in it.  So we prayed to our God, and set a guard as a protection against them day and night.

Speaker 4:  But Judah said, “The strength of the burden bearers is failing, and there is too much rubbish so that we are unable to work on the wall.”  And our enemies said, “They will not know or see anything before we come upon them and kill them and stop the work.”  When the Jews who lived near them came, they said to us ten times, “From all the places where they live they will come up against us.”

SECTION 5: THE WALL IS COMPLETED

Speaker 5:  So in the lowest parts of the space behind the wall, in open places, I stationed the people according to their families, with their swords, their spears, and their bows.  After I looked these things over, I stood up and said to the nobles and the officials and the rest of the people, “Do not be afraid of them. Remember the Lord, who is great and awesome, and fight for your kin, your sons, your daughters, your wives, and your homes.”

Speaker 6:  When our enemies heard that their plot was known to us, and that God had frustrated it, we all returned to the wall, each to their work.

This is the Word of the Lord.

New Revised Standard Version Bible, copyright © 1989 the Division of Christian Education of the National Council of the Churches of Christ in the United States of America. Used by permission. All rights reserved. 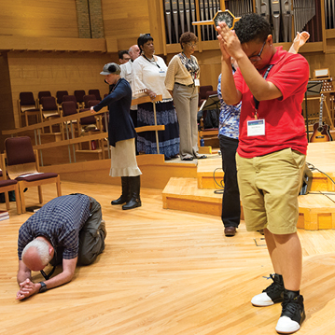