Churches can become more multicultural through traditioned innovation based on prayer, intention, hospitality and discomfort.

Every first Sunday, worship at Light of Hope Presbyterian Church in Marietta, Georgia, is very traditional. Except for one thing.

Before the service begins, children gather at the back of the sanctuary. They choose from Native American hand drums, double-sided Irish drums, African shaker gourds and cowbells and Latin clavas (rhythm sticks).

“Their drumming and shaking is loud, even uncomfortable or disturbing,” says pastor Edwin Gonzalez-Gertz. All worshipers turn to face the joyful noise. At the count of seven, everyone is quiet. Then someone walks down the aisle with a candle raised high and says, “Behold! The Lord is in his holy temple; let all the earth keep silence before him!”

This ritual reminds Light of Hope worshipers that they’ve committed to create a church for their neighborhood’s next generations. St. Cyprian’s Episcopal in Oxford, North Carolina, and Tabernacle Baptist in Richmond, Virginia, have also changed to connect with neighbors. Though each context is different, all have discovered four essentials for multicultural worship: prayer, intention, hospitality and discomfort.

Light of Hope formed in 2013 as a merger of three congregations. Each church had opened as part of 1960s white flight from Atlanta. Five decades later, the neighborhood was 60 percent people of color (African American, Hispanic Latino, and African) and 40 percent white. In 2010, leaders from the shrinking congregations—100 percent Anglo, average age 75—began meeting to pray for renewal.

They decided to become one congregation to better serve their neighborhood. They hired Edwin Gonzalez-Gertz, a pastor who was born in Puerto Rico and speaks five languages. “Now our average age is 62 and our ethnic racial portion is 35 percent and growing,” he says.

For 40 years, historically black St. Cyprian’s Episcopal Church in Oxford, North Carolina shared a pastor with a white parish. The white church ended the “yoked” arrangement so its new pastor would have time to teach adult education. In 2009, the handful of worshipers still at St. Cyprian’s began praying for a vicar (pastor).

Meanwhile, Spanish speakers started moving into the church neighborhood, and John Heinemeier, a retired white Lutheran pastor who had served black and Latino congregations, asked to work quarter time at St. Cyprian’s. “We’ve always had the desire to be more inclusive but had never had a pastor to help us navigate that process,” says lifelong member Vickie Hammie.

Tabernacle Baptist, a grand old church in Richmond, Virginia, had shrunk to 100 people by 2004, with very few children. For three years, they prayed for renewal. God responded by sending refugee families who’d grown up Baptist in Burma (now Myanmar) but didn’t speak English. Burmese refugees now account for a quarter of the congregation. 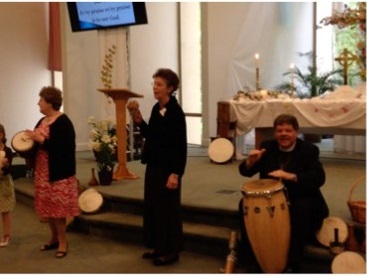 ’s exterior front wall proclaims, “Celebrating Diversity in Unity in Christ.” As Gonzalez-Gertz says, “This is Georgia, so that’s saying something.”

Light of Hope’s three original congregations all had the same unchanging worship format thought wrongly to be “the Presbyterian liturgy.” Their pastor explained that they could remain Presbyterian and Reformed even while embracing innovative worship that’s sensitive to both the chartering generation and diverse neighborhood.

When people enter St. Cyprian’s, they see a sign that reads “All Are Welcome.” “We take this very seriously and try to live this out in our everyday walk, not just on Sunday,” Vickie Hammie says. The first Latina that Pastor Heinemeier met in Oxford was a Mary Kaye salesperson. “She knows everybody. And she can sell. So she brought her wider family to St. Cyprian’s,” John Heinemeier said in a National Public Radio interview with Frank Stasio.

Light of Hope received a Vital Worship Grant from the Calvin Institute of Christian Worship to focus on multicultural rhythms and drums. “Every culture has rhythm. It’s taken time and attention, but we’re more accepting of diversity in worship, more inclusive of musical instruments, styles and cultures. We’ve used drums for the call to worship, as transition sounds, to accompany music and in processions,” Gonzalez-Gertz says. Tiffany Peoples, the director of music and worship arts, is African American and a member of a gospel recording group, 4LOVE, that tours internationally.

St. Cyprian’s Vital Worship Grant helped them create bilingual worship to “bridge all gaps of race and class” in a church that has become about half black, half Latino. Every Sunday, a black eucharistic minister and Latino eucharistic minister serve communion. St. Cyprian’s has a Mexican folk dance group, African drumming group, integrated gospel choir and integrated liturgical dance group.

As Burmese refugees from five language groups began attending Tabernacle Baptist, the congregation made a key decision. Pastor Sterling Severns said in a faithandleadership.com story that the church committed to seeing every worshiper as part of the priesthood of all believers. They decided to not treat refugees as a “‘project’ or separate subgroup.” This choice led the congregation to value ideas and participation from everyone, whether young or old, CEO or homeless, American-born or not.

Gonzalez-Gertz and Hammie use “radical” to describe how their congregations welcome people through music, language and shared meals.

Light of Hope plans traditional worship for every first Sunday, blended worship for the next three and themed worship for every fifth Sunday, such as bluegrass or Caribbean. “Radical hospitality means that, even though I might not like a music style, I’m okay, because my brother and sister are rejoicing in that style,” Gonzalez-Gertz says.

“We now have people who were born in Africa and Spanish-speaking countries. They all speak English, but, in every service we use one or more of their heart languages. We’ve done songs, prayers and scripture readings in English, Spanish and Swahili. Our choir is learning a song in Gaelic. Their role has changed from just singing anthems to teaching new songs and singing some calls to worship and confession,” he says.

At monthly community meals featuring home-cooked food, Light of Hope members are assigned to sit at and host tables. They share information about the church and say, “If you don’t have a faith community, we’d like to invite you to church. And if you come, one of us will sit with you.” Four families have joined because of this.

During their grant year, St. Cyprian’s hosted a Super Salsa Sunday and Super Soul Sunday so worshipers could share each other’s music and food. They use a bilingual hymnal and completely bilingual worship folders so people can cross over into the “other” language. They simultaneously recite the confession of sin, Lord’s Prayer and Nicene Creed in Spanish and English. The sermon is in English, followed by a Spanish summary.

“Our vestry decided to radically welcome God’s folk of different ethnicity. Still, I’m blown away that our older members from both the Latino and African American groups tolerate different languages spoken during the liturgy. The Holy Spirit takes over in a mighty, mighty way that has made the service go well in spite of language barriers,” Hammie says. She notices black and white members “clapping and praising” during Latino music and Latino worshipers doing the same during gospel selections.

St. Cyprian’s worshipers get to know each other at coffee time, church meals and baby showers. These conversations have led black members to help Latino members find jobs or get into college.

At Tabernacle Baptist, most of the worship service is in English, but Burmese members of all ages also lead prayers and hymns in their own dialects.

Multicultural congregations inevitably disagree about what’s proper in worship, whether it’s the Light of Hope cacophony before traditional worship or a memorial for the victims of the June 17, 2015 mass shooting at a black church in Charleston, South Carolina. “Some people over 80 weren’t sure that memorial observance in worship was necessary. I try to understand that the world is changing radically, and some changes are a lot for people to absorb,” Gonzalez-Gertz says.

Using children’s ideas is part of radical hospitality at Tabernacle Baptist, even when it leads to noisy worship. Before a recent Pentecost Sunday, a boy taught members how to make origami cranes and doves. The Pentecost reading was from Acts 2 about how the Holy Spirit descended. During the reading, a dozen members rose and began reading the passage in other languages all at once. And children rushed into the worship space from every door, letting loose red, yellow and orange helium balloons that lifted origami birds above the babble.

Vickie Hammie recalls the discomfort among older black members when Latino parents let their children roam around more than what had been the St. Cyprian’s norm. The pastor involved ushers and worshipers in discussion that led to mutual change and tolerance. “Our beloved vicar’s style of ministry was very calm, accepting and displayed genuine kindness without making anyone feel uncomfortable.

“We haven’t lost anything in moving from being a historically black congregation to a church that’s now more representative of the kingdom of God. It’s led me to bury stereotypes I once had about my Latino brothers and sisters,” Hammie says.

In his NPR interview, Heinemeier shared an experience from two weeks before his retirement from St. Cyprian’s. He’d told worshipers about progress in the state legislature toward creating a specialized drivers license so immigrants without papers can legally drive to work. “We had black folks clapping as well as Latinos,” he said.

Learn about Light of Hope Presbyterian’s worship grant. Read a story from the church’s first year. They used the Engage adult curriculum to start seeing their neighborhood as a mission field. Listen to Light of Hope’s music and worship director, Tiffany Peoples, in concert in Italy.

Learn about St. Cyprian’s Episcopal worship grant. They use the Flor y Canto bilingual hymnal. Read a story about how St. Cyprian’s became multicultural. Listen to an NPR interview with their recently retired pastor, John Heinemeier.

Both St. Cyprian’s and Light of Hope use Jorge Lockward’s bilingual song of confession, “Perdón, Señor/Forgive Us, Lord.”

Use Sandra Van Opstal’s book The Mission of Worship as a study guide for your music or worship committee. Glean highlights from her presentation on the curse of being a white suburban worship leader.

Feel free to print and distribute these stories at your staff, board, worship arts or outreach meeting. These questions will help people start talking about how to become multicultural. Mutuality in Worship: Sharing Our Stories and Gifts
This workshop focused on practical ways to involve people's stories, songs, and gifts in our corporate worship times—all with the goal of unity in diversity.
Read more »