African American biblical interpretation rises from a particular context. It offers unique perspectives on God’s character and glory. Esau McCaulley explains that learning how other cultures exegete the Bible benefits the whole church.

Esau McCaulley teaches New Testament at Wheaton College in Wheaton, Illinois. He researches and writes about Pauline theology and the intersection of race, Christian identity, and social justice. As a priest in the Anglican Church in North America, he serves as provincial director for leadership development. In this edited conversation, McCaulley talks about his forthcoming book on African American biblical interpretation. Reading While Black: African American Biblical Interpretation as an Exercise in Hope will be published by InterVarsity Press in November 2020.

Why did you write this book?

"We need the whole church to interpret the whole
Bible because every culture has its blind spots."

My underlying theology of the Bible is that we need the whole church to interpret the whole Bible because every culture has its blind spots. I don’t believe any culture is closed off from the ability to critique or be critiqued. Instead, God created each culture to be a manifestation of his character and glory. For example, there’s a different ethos in how British evangelicals and U.S. evangelicals understand the Bible. African Americans have a unique contribution in biblical interpretation because of our history and lived experience.

What are some key elements of African American biblical interpretation?

African American biblical interpretation is unapologetically canonical and theological in that it takes the whole Bible into consideration. It arises out of a context of black life in America. Our tradition is exegetically patient because, despite historical misuse of the Bible, we don’t simply read it as a text of hostility. Historically black churches have a more expansive set of dialogue partners. For example, while many evangelicals are used to responding to deconstructivist readings of the Bible, few have responded in print to African American secular or even religious criticisms of the Bible.

Can you give examples of an African American perspective on a biblical passage?

The Bible has a particular meaning. So, when I talk about African American biblical interpretation, I don’t think of it as creating meanings that aren’t there. But we place emphases that other cultures neglect.

Christians universally understand the first chapters of Genesis as saying that everyone is created in the image of God. But as an African American I see in these chapters a biblical basis to argue against the way the Bible has been used to justify slavery or treating us as sub-human.

Also, the role of the prophet is very important in the African American Christian tradition. In Matthew 23:37, Jesus laments, “Jerusalem, Jerusalem, the city that kills  prophets and stones those sent to it!” Some Christians read this as saying that we shouldn’t reject Jesus as the people of his day did. But the question becomes “What did they reject about Jesus’ prophetic message?” To answer that we need to look at how often Jesus quoted the prophets, especially Isaiah.

He quoted prophets who warned against idolatry and exploiting the poor. He quoted prophets who gave a different account of king and kingdom than those on offer by other people in his day. Rejecting Jesus also means rejecting the prophetic tradition he represents. Therefore, accepting him as the risen Lord involves accepting the prophetic tradition he embodied. African American biblical interpretation keeps together what some would pull apart. We see the prophetic call as both obedience to the one God and justice for the oppressed. This isn’t unique to African Americans, but it is consistent throughout our history.

What kind of pushback does African American biblical interpretation receive?

When African Americans talk about social transformation and say that churches ought to care about the poor, we often get all sorts of baggage unloaded on us. We’re accused of being liberals, socialists, or communists. We’re accused of believing things we don’t believe at all. In fact, if you look at the faith statements of every historically black denomination in the U.S., you’ll see they are all theologically traditional.

But already before slavery ended, black abolitionists were quoting what Paul said when talking to Jews in Thessalonica, that God “hath made of one blood all nations of men for to dwell on all the face of the earth” (Acts 17:26, KJV). African American biblical interpretation sees that as a call for all Christians to live in a universal brotherhood known for societal and personal transformation.

You have blogged that “the Black Church is the glory of American Christianity.” What did you mean?

The glory is in God’s work. African Americans might have had reasons to be suspicious of Christianity because of the way it was delivered. It’s glorious that African Americans were able to read and interpret the Bible for themselves and find the hope that God offers us as full image bearers. I experienced that glory growing up in black Baptist churches. I didn’t have to reject any of that spiritual formation to become Anglican. I became a priest in the Anglican Church in North America because I felt that the liturgical structure and communion help me live out my faith.

Can you share a New Testament example or paradigm for how churches can deal with contentious issues, such as racism, poverty, or injustices?

In Galatians 6, Paul talks about what it means to live together in Christian community. He asks us to carry each other’s burdens and so fulfill the law of Christ. When I confront racism, it’s tempting to start by debating details. But a New Testament paradigm calls me to ask instead what christologically informed love requires. As an African American, even when I’m frustrated, I ask myself how I can articulate my frustration in a way that the largest unit of people can hear and accept. Carrying each other’s burdens also means, as I wrote in Christianity Today, that the “burden of deconstructing racism and white supremacy should not be the sole province of black and brown Christians.”

Loving another as Christ often demands my losing public support because people seem determined to misrepresent my position as one who stands in the African American tradition. Christologically informed love requires us to acknowledge the truths of the Bible hiding in plain sight. What do the prophets and the Beatitudes have to teach us? What does the liberation of slaves at the Exodus reveal about God’s character, and how should that inform the church’s witness?

When considering separate issues, such as moral corruption or the plight of widows and orphans, we can look at James 1:27: “Religion that is pure and undefiled before God, the Father, is this: to care for orphans and widows in their distress, and to keep oneself unstained by the world.” This reminds us that the Bible calls Christians to look at our lives through both the lens of societal transformation and the lens of personal morality.

What do you hope your book will achieve?

I pray it will help people to read the Bible as an exercise in hope. Through Bible reading and the process of biblical interpretation, we can all see the Bible as our friend, not our enemy. This encouragement is important for people who have experienced the Bible being used unjustly against them. I also see my project as pertinent because it helps me fulfill the stewardship of the message given to me as a child growing up in an African American Baptist context.

Follow Esau McCaulley’s blog Thicket of the Jordan and connect with him. Register for the 2020 Calvin Symposium on Worship to hear him speak on New Testament guidance on public witness and prayers during the Lord’s Supper and baptism. McCaulley cofounded Call & Response Ministries, which hosts conferences and creates resources for black and multiethnic churches. He writes often for major publications. 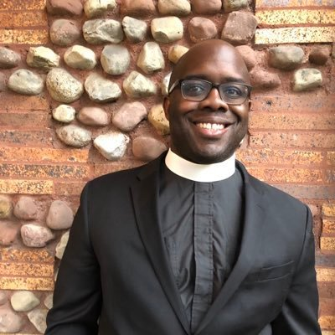 Mika Edmondson on MLK’s Theology of Unearned Suffering
Jesus’s example of laying down his life for others inspired Martin Luther King Jr. and the U.S. civil rights movement. This theology of how to engage undeserved suffering can help congregations deal with pain.
Read more »