A visual symbol that can be placed on the cover of service bulletins, within the written liturgy, or on a large screen display.

From the first two letters of Christ's name written in Greek (XPIΣTOΣ) a monogram is formed known as the Chi Rho (XP), Found in the catacombs, this symbol is one of the earliest monograms used by christians to represent the resurrected Christ. It dates even earlier than the cross, the first symbol we usually connect with Christ and Christianity, which did not appear until the fourth century. Variations on the symbol have been made over time. The P can be shaped to look like a shepherd's crook; or, by removing one arm of the X, a hidden cross is revealed. The Latin word pax, meaning "peace," has also been incorporated into monogram. Each symbolizes the nature of God in Christ Jesus. Go forth in the name of Christ.

The image is an original linoleum block print resulting from a printmaking process in which an image is drawn on a block of wood covered with a thin layer of linoleum, and then hand-carved to expose areas that will be white. Ink is rolled onto the block, covering the surface not cut away. Paper made from the mulberry tree is laid on top and hand rubbed with a Japanese barren or wooden spoon. In transferring the ink to the paper the resulting image is a reflection of the design placed on the block. It first appeared in the book Visuals for Worship (Faith Alive Christian Resources, 2006) which is no longer in print.

When using the image please include the following acknowledgment: “Linoleum block print by Elizabeth Steele Halstead." 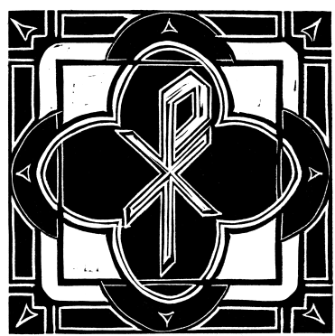 Hands
A visual symbol that can be placed on the cover of service bulletins, within the written liturgy, or on a large screen display.
Read more »

Stream
A visual symbol that can be placed on the cover of service bulletins, within the written liturgy, or on a large screen display.
Read more »

Wheat and Cup
A visual symbol that can be placed on the cover of service bulletins, within the written liturgy, or on a large screen display.
Read more »