Baptists living in what is now Belarus have experienced war, shifting borders, persecution and the breakup of the Soviet Union. Their history gives them a unique perspective on what it means to follow Christ and suffer for him.

Leonid Mikhovich is president of Minsk Theological Seminary, the first evangelical higher education institution in the Republic of Belarus. He is general secretary of Baptist Union in Belarus and a regional pastor, overseeing 60 Baptist churches in western Belarus. He was a Summer 2015 visiting scholar at Calvin College in Grand Rapids, Michigan, where he did PhD research and visited churches. In this edited conversation, he describes what churches in Belarus and the U.S. can learn from each other.

When did the Baptist church start in modern-day Belarus?

Evangelical Christianity reached Belarus from several geographic sources, beginning in the late 1800s. Poor peasants who moved to southern Ukraine or emigrated to the United States in search of employment were introduced to the gospel. After returning home, they preached to their neighbors and relatives. During and after World War I, refugees, military captives and people sent to Siberia were won for Christ in local Baptist congregations and then planted churches in Belarus.

What was the situation for Baptists in Belarus when the USSR was in power?

Early Bolshevik policy was supportive of the evangelicals’ struggle for religious freedom, but communist policy toward them soon changed. From 1929 to 1937 many ministers, Orthodox priests and Christians of all denominations were arrested, killed or banished as “enemies of the nation.” In 1935 Baptist Union closed, and by 1937, all churches in eastern Belarus were shut down. Western Belarus was under Polish control in World War II, so churches there enjoyed some freedom.

What was it like for your family to be Baptist in the USSR?

My grandparents were among the first evangelical Christians in western Belarus. My mother worked at a school but was dismissed because she was Baptist. It was almost impossible for evangelicals to get government positions; even now it’s difficult.

When I was a boy, we weren’t allowed to build houses of prayer [church buildings] in my city. We regularly traveled three hours one-way to worship in remote area churches. Sometimes we visited unregistered congregations that met nearer to our apartment. I was one of only two Baptists in my school class, and some teachers treated us like enemies. We had a strong sense of being separate from culture. We didn’t dance, watch TV, drink, smoke, say bad words or go to cinemas. Even now, we are known for having large families, opposing abortion and divorce, enjoying a strong sense of community and being active in social work.

What happened after the Soviet system broke up?

Christians got unbelievable opportunities to worship in public places; publish Bibles, songs and Christian literature; and register churches and missions. We Baptists were able to buy a very nice piece of land and start Minsk Theological Seminary. Since Belarus’ current president consolidated his power, it’s become very difficult to buy or build church property. Most missionaries have had to leave. One Baptist I know was an unbeliever when he was elected to parliament, but when he came to Christ, he was dismissed. However, compared to the Soviet era, we still possess ample opportunities for evangelism and worship.

How does Russian Baptist history influence your churches today?

We are still a minority. Most people in Belarus say they are Orthodox, but only two or three percent go to church, even at Christmas or Easter. There are a lot of Catholics, maybe 500 Pentecostal and 320 Baptist congregations and even fewer Adventists, Charismatics, and others. Any Evangelical Christians who doesn’t identify as Orthodox is known as a believer.

Constant hostile pressure from outside has resulted in worship that is based on separation from the world, suffering for our faith and eschatological calls to repentance. Bans on theological education and publishing theological literature resulted in the idea of intuitive knowledge, in which the Holy Spirit directly reveals the knowledge of truth without the help of dictionaries, encyclopedias or commentaries.

How is a typical Russian Baptist worship service structured?

There’s prayer to open and close the service. Usually after a sermon, three or four people will offer spontaneous prayer. Pastors encourage men to pray, but it’s mostly older women who pray. In traditional worship, people go on their knees to pray. There are no kneeling benches or carpets, just wood or laminated floors.

Most churches also have a half-hour “ministry of church” time in the middle. People send up notes to the pastor to say they’d like to give a testimony or read a poem. Poetry is very popular in our culture. Pastors usually decide on songs, although in some bigger churches, choirs choose songs. Most churches have the Lord’s Supper once a month.

You’ve visited many churches during visits to West Michigan and metro Chicago. What have you seen that you’d like to introduce to churches back home?

Many Baptists in Belarus think there are only two worship options, traditional or contemporary. It would be good for them to know about alternatives:

What gifts or practices from your tradition could bless U.S. churches?

First, you could benefit a lot from each other, because you have a long history, so many worship resources and different ways of worshiping.

You could borrow our spirit of repentance and humility. Sometimes it is good to worship with awe and restraint, to pray by kneeling and to include many people as active participants in worship.

You could emphasize eschatology more. The most popular texts on Baptist sanctuary walls in Belarus are “God is love” (1 John 4:8); “And, behold, I come quickly” (Revelation 22:7); and “The time is fulfilled, and the kingdom of God is at hand; repent and believe in the gospel” (Mark 1:15). Our older people, especially, have the imprint of persecution. They express their feelings to God in song about how difficult it is to fight against the world, against the flesh and for salvation. 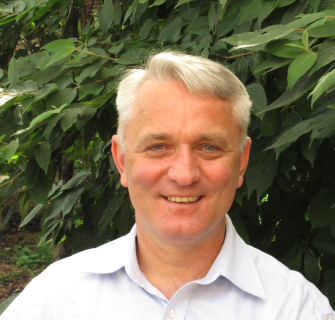 Ellen Gadberry on Congregations as Communal Visual Choirs
Many worshipers do not see themselves as creative or gifted in the arts. Yet low-risk opportunities to encounter visual art in worship and participate in making liturgical art can strengthen worshipers’ identities as children of the Creator.
Read more »

Sunday Morning Worship: Who's not there and why not?
As churches work toward full, conscious and active participation in liturgy, some are noticing patterns of worship attendance. They're reaching out to those absent from Sunday morning worship. A feature story focused on Sunday worship attendance.
Read more »