Worship Songs about Care for Creation

Caring about God’s good creation includes lamenting whatever harms it and joining God’s mission to make all things new. Songs from around the world explore these ideas.

The hymns, songs, and short songs listed here are organized according to the themes of Creator and creation; lament and blessing; and earth keepers and caretakers. Some are so familiar that worshipers might sing them without thinking about the full implications of how God intends us to live with our neighbors in the web of life.

About half are widely sung by Catholics and Protestants in many cultures. The rest may introduce you to the heart language of Christians from another era or culture. Almost all are listed on Hymnary.org. Check out its features and tutorials to get the most out of this amazing resource.

“O Rejoice in All Your Works,” Wendell Kimbrough. This song based on Psalm 104 won a new psalm contest.

“We Worship You, Whose Splendor Dwarfs the Cosmos,” Martin Leckebusch. Here’s another based on Psalm 104.

“All things Bright and Beautiful,” Cecil F. Alexander. First published in 1848, this song’s appearance in Protestant hymnals has soared since 1970, when the first Earth Day was observed. It’s also in the two most recent editions of Worship, a widely used Catholic hymnal.

“Nyanyikanlah/Hallelujah! Sing Praise to Your Creator,” Tilly Lubis and David J. Diephouse. This song has Indonesian and English text and is based on Psalm 148.

“Let All Creation’s Wonders,” Martin Leckebusch. Inspired by Psalm 148, this piece is especially beautiful when accompanied by organ and brass ensemble.

“Creation Sings (the Father’s Song),” Keith and Kristen Getty, Stuart Townend. This contemporary song calls all creation to stand and sing. Listen to it here.

“How Great Is Our God,” Chris Tomlin, Jesse Reeves, and Ed Cash. This CCLI song is a great example of praise songs that use images from nature—even though many of us tend to think of them as metaphors rather than as connected to the real world.

“Many and Great, O God Are Your Works,” Philip Frazier, paraphraser. Originally written by Joseph Renville, son of a French trader and Dakota woman—and set to a Native American melody—this is now widely sung in many cultures.

“Earth and All Stars,” Herbert Brokering. The first words are: “Earth and all stars! Come, rushing planets! Sing to the Lord a new song.” It works well when you’re reading from or preaching from creation psalms such as Psalms 8, 19, 65, or 96.

“St. Patrick’s Breastplate,” translated by Cecil F. Frederick. The third verse pictures how God is present and at work through the sun, moon, sea, rocks, and other natural phenomena.

“God of Wonders,” Marc Byrd and Steve Hindalong. This contemporary worship song praises our “God of wonders, beyond our galaxy.”

“The Garden of the World (Lament for the Earth),” Shirley Erena Murray. This song from New Zealand helps worshipers confess that “the greening of all life is dying in our care” and plead, “We pray for one more chance to tend to earth’s repair!”

“Isaiah the Prophet has Written of Old,” Joy F. Patterson, sung to the tune Judas and Mary. The second verse laments, "Your people despoil all the sweetness of earth; the brier and the thorn grow wild,” and pleads, “Lord, hasten to bring in your kingdom on earth, when no one shall hurt or destroy, when wisdom and justice shall reign in the land and your people shall go forth in joy.”

“Pelas dores deste mundo/For the Troubles,” Rodolfo G. Neto. This song from Brazil laments that “the whole creation’s laboring in pain,” and prays for God’s peace, power, and mercy.

“The Heavens Declare Your Glory,” Thomas R. Birks. This familiar hymn is based on Psalm 19 and adapts a tune from a J.S. Bach cantata. It explains how the heavens declare God’s glory and promises, “So let my whole behavior, each thought, each deed I do, be, Lord, my strength, my Savior, a ceaseless song to you.” How do you apply your environmental choices to living on the earth created to reflect God’s glory?

“Touch the Earth Lightly,” Shirley Erena Murray. Though it works with several tunes, it’s especially effective with the tune Ai Hu, by Swee Hong Lim. It begins “Touch the world lightly, use the earth gently, nourish the life of the world in our care.”

“Give Us Clean Hands,” Charlie Hall. If God loves and is redeeming the entire cosmos, then what does it mean for our daily life choices to ask God to give us clean hands?

“Here I Am, Lord,” Daniel L. Schutte. The song begins with God asking, “I, the Lord of sea and sky, I have heard my people cry….Who will bear my light to them? Whom shall I send?” Worshipers respond in the refrain, “Here I am, Lord.”

“The First Place,” Matthew Westerholm. Based on Colossians 1:15-20, the song reminds us of Christ’s role in creation: “Every inch of this universe belongs to you, O Christ. For through you and for you it was made.”

“Mayenziwe/Your Will Be Done,” arranged by John Bell. This lively song is set to a South African traditional melody. What does it mean for all creation for God’s will to be done on earth as in heaven?

“Mungu ni mwema/Know that God is Good,” arranged by John Bell. Sing this traditional Congolese song when you worry what earth’s climate will be like for your grandchildren’s grandchildren.

“Live in Charity/Ubi Caritas,” Jacques Berthier. While worshipers repeat this simple Taize song, ask them to think about what it means to live in charity with the earth and all creatures.

“Goodness is Stronger than Evil,” Desmond Tutu. While God invites us to join in caring for creation, we are not the ones to save the world. God is still creation’s Creator, Redeemer, and Sustainer. 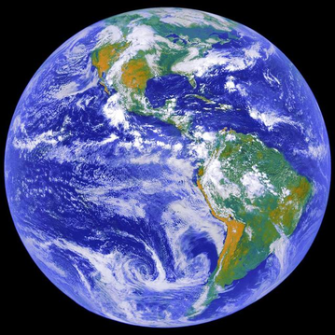 The Earth (photograph by NASA)

Psalms in Worship
The Psalms are a font of inspiration, encouragement, and instruction in the life of both public and private prayer.
Read more »

Worship Resources for Creation Care
We confess that God created heaven and earth and everything in it. We sing that this is our Father’s world. Yet, billions of people suffer in places where so much is no longer bright and beautiful. This worship resource guide will help your community plan services that honor our Creator, who invites us to join in caring for the whole creation.
Read more »