When Local Churches Learn and Worship Together

Four congregations in Durham, North Carolina, discovered that planning worship, learning, and reflecting together helped them be better witnesses in their East Durham neighborhood.

Congregations in vulnerable neighborhoods usually think of themselves as the “good guys,” the local people who “serve the needy.” But their neighbors might see them differently. The way a church pictures itself doesn’t always match how other congregations see it. Nor does every church include or reflect its outreach in its worship.

Four churches dealt with those disconnects when they participated in a 2018 Vital Worship Grants project led by DurhamCares in Durham, North Carolina. They called their project the East Durham Vital Worship Movement (EDVWM).

“The mission of DurhamCares is to foster collaboration, develop leaders, and educate the people
of our city to care for their neighbors in holistic ways. Our church mobilization network cultivates place-based cohorts of churches that partner to make positive impacts in their neighborhoods,” says Reynolds Chapman, DurhamCares executive director and an ordained Evangelical Covenant Church minister.

In 2017, DurhamCares began inviting East Durham pastors to quarterly prayer breakfasts. A handful chose to meet more often to talk about worship. Chapman says they began by agreeing that worship springs from who God is. Worshipers respond by ascribing worth to God through relationship. This response varies by culture and by context. East Durham pastors reflected on their congregants’ context of suffering and oppression.

"Worship is not faithful if it does not
translate into concretely attending
to the needs of the community."

“Participants said that faithful worship includes but is not limited to the four walls of the church. Worship is not faithful if it does not translate into concretely attending to the needs of the community. This is what 24/7 worship looks like—ascribing so much worth to God that we do it all throughout the day and see others the way God sees them,” Chapman says.

The four EDVWM churches are within a five-minute walk or drive of each other. Pastors and leaders met monthly during the grant year. They decided that one month they’d learn about a topic, and the next month they’d reflect on it together. They also planned two collaborative worship services and a prayer walk.

DurhamCares is a Christian community development organization, which means it sees all people and places as uniquely gifted by God. It asks people to name their hardships but doesn’t view people or places as primarily “in need.” That’s why the first EDVWM learning experience was a panel of neighborhood leaders who talked about community gifts and challenges.

“A community organizer, a longtime pastor, and a man without housing shared their perceptions of community churches,” Chapman says. “Grant participants did a good job of listening and not being defensive. They learned that local churches are perceived as places with expectations of how to dress and speak, places that expect people to have a certain way of being put together.”

Pastors Allen Jones and Dorothy Clark minister to people who’ve experienced hurt and rejection in brick-and-mortar churches. Their Change Paths Ministry, one of the four grant congregations, meets twice a week for food and a sermon on the front porch of a modest two-bedroom home.

Greater Emmanuel Temple of Grace, a Pentecostal congregation, reaches out through a jail ministry, a homeless shelter, a food pantry, and school supply donations. Still, the neighborhood panel members struck a nerve with Demarcus Williams, a Greater Emmanuel associate pastor. In a video about the grant, Williams says he realized that their many of his congregation’s relationships with its community “had been transactional at best.” He says the congregation wants to learn how to “see talents and resources that residents already have, to empower neighbors to be assets to this community and partners with us.”

EDVWM decided to hold its collaborative worship services on Saturdays in neighborhood parks. “That way there’d be no architectural barriers for people who wouldn’t normally enter a church. This allowed passers-by to participate,” Chapman says. The first service was in a park that draws people experiencing homelessness, addiction, or unemployment. About 40 percent of attendees were not from the four congregations. Several said they were inspired to see neighborhood churches working together.

Camryn Smith, an East Durham resident and educator, led a workshop on anti-racism. She works with local nonprofits such as Organizing Against Racism and Communities in Partnership. Smith explained how the practice of redlining led to neighborhood trajectories of disinvestment, decay, gentrification, and displacement. Redlining, which still happens, means the way banks and realtors discourage people of color from buying property in certain neighborhoods. Banks deny mortgages or charge higher interest when people of color attempt to buy property in certain neighborhoods. This makes it harder to build generational wealth.

After the Great Recession, investors began buying up distressed and foreclosed property in East Durham because it is near downtown Durham and less than four miles east of Duke University. More affluent people, especially white and Latinx, began moving into what had been a black neighborhood.

As Smith lamented in a news video, “Sometimes new neighbors’ biases put long-time neighbors in jeopardy with police. They call police on young black and brown men whom longtime neighbors know and don’t see as a threat.”

“Even for people who have always lived here,” Chapman says, “it was eye-opening to hear about how racism impacts our nation, community, and neighborhood. Pastors told us that it helped them understand that people’s struggles weren’t just because of personal choices, [but] because structural violence and systemic racism have shaped the community’s history."

Georie Bryant, DurhamCares church mobilization officer, led the anti-racism reflection the next month. Bryant is also a local historian, chef, and farmer who helps churches start community gardens. “There was a lot of lamenting going on throughout the entirety of our learning, reflecting, and worshiping together,” he says. “Many African Americans in our community are being displaced by gentrification.”

Participants talked about how all people are created in God’s image, but racism, classism, and oppression dehumanize people. That dehumanization corrupts the image that God intends us to reflect. “We had to have hard conversations about privilege and power and Christ’s John 17 prayer that we live in unity,” Bryant says.

Grant participants learned from Camryn and Ernest Smith about asset-based community development (ABCD). They learned from Urban Doxology about worship that is ecumenical, incarnational, and multicultural.

ABCD identifies and connects individual and community assets and resources. Community members decide together how to work for the common good, and they use what they have before seeking outside help. Christian Community Development Association (CCDA) philosophy is similar but based more in the church. Both strategies emphasize listening to communities rather than coming in with an “outreach ministry” that you think “they” need.

“I care about this community—the one I grew up in—so I identify with a lot of what [CCDA cofounder] John Perkins has said,” Bryant says. “My job as church mobilizer is to engage churches to become partners with community members and stakeholders. We don’t want churches to see community as a commodity or to engage ‘because churches should do this.’ We want to help churches and communities see each other more clearly. Otherwise churches can actually do harm”

These insights led EDVWM to plan a second worship service that integrated loving God with loving neighbors. Besides a worship stage, they arranged for a bounce house, free food, and booths from groups focused on voter registration, agriculture education, young moms, dads, local leadership, and more.

“We broadcast the worship loud enough so that everyone in the community could hear it,” Bryant says. “All the sound, activity, and food brought in a lot of kids. We had pastors doing arts and crafts with kids. We didn’t view all the activity as distracting from worship because one of our goals was to break down barriers between mission and worship. If worship is supposed to be part of everyday life, then we shouldn’t make people feel you have to stop living to come to worship.”

Chapman explains that the churches committed to plan worship together because “we are inspired by the biblical theology that place matters.” Grant participants spoke about how hard it is for a cohort of neighborhood churches to do collaborative worship. Yet those who completed the grant year affirmed that what they gained was worth the difficulties.

“Before applying for the grant, we asked so many churches to participate. Only five responded. One church had to drop out after we started. One of our collaborative events was a prayer walk rather than a worship service because of brooding tensions between excellence and relationship as values,” Chapman says.

It’s helpful, Chapman says, to have a group like DurhamCares to “steer the process of building relationships among churches. This helps churches feel less territorial. And it’s fine to start small.”

Bryant agrees. “It’s very important to be patient,” he says. “I’m not saying that outcomes aren’t important, but everything has a process. You can’t rush relationships and community building. Remember that God is patient too.”

Read the grant poster and watch a short video about the East Durham Vital Worship Movement. Consider applying for a Vital Worship Grant from the Calvin Institute of Christian Worship.

Gather a group to read and discuss one or more books about Christian community development and worship:

Read “Timeline of 100 Years of Racist Housing Policy that Created a Separate and Unequal America” by Shareable cofounder Neal Gorenflo.

Feel free to print and distribute this story to your staff, board, adult education group, outreach committee, or worship committee. Discuss how you might work and worship with nearby churches for the good of your neighborhood: 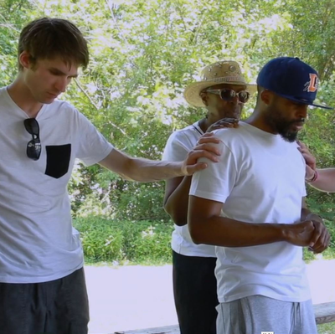 Georie Bryant and Reynolds Chapman on Prayer Walks
Sometimes Christians worry that praying in public will be embarrassing or offensive. Four congregations in Durham, North Carolina, organized a prayer walk that connected with neighbors.
Read more »