What Inside Songwriters Can Teach Outside Churches about Worship

A songwriting class in a North Carolina prison taught eight women to write biblical songs that touch congregations inside and outside prison walls.

As seminarians, they took Project TURN courses onsite at a prison. And, as founders of Hardworker, a Durham-based rock band, they put their discoveries to music.

“I took classes about women in American Christian churches and domestic violence in the Bible. My incarcerated classmates had the experience and wisdom to read the Bible as if it was a living, breathing document.

“Like Hagar, Tamar, Ruth, Jephthah’s daughter, and the Levite’s concubine, my new friends were not narrators of their own story. Yet they had the faith to say, with Psalm 27:13, ‘I believe that I will see the goodness of the Lord in the land of the living,’” Long says. She drafted a hymn, “God of Every Daughter.” Women began singing it in the congregation at North Carolina Correctional Institute for Women (NCCIW), where Long volunteered.

Meanwhile, studying and working with men on death row led Conner to write “Lazarus.” He realized that Jesus’ choice to raise Lazarus from the dead meant Lazarus would have to die again. “The men I worked with were condemned to die a double death, first sentenced to death and later executed. My song is an attempt to remember the people who society locks away,” he explains.

In summer 2016, both led an intensive songwriting course for eight women at NCCIW. They partnered with Interfaith Prison Ministry for Women (IPMW). The project was made possible by the Calvin Institute of Christian Worship Vital Worship Grants Program.

Sharing the women’s songs through concerts revealed what inside songwriters can teach outside congregations about seeing people as God does, using all of scripture, seeking balance, and sharing faith stories.

Connect with people who feel invisible

The songs and public concerts illustrated how forgotten people feel while incarcerated. “In Noah’s House” compares animals shut up two by two in the ark to cellmates in prison. The song begins, “My throat hurts from not being heard, drowned out by the rain and your lack of attention…my voice has gone numb.” The songwriter was the only class member who chose to remain anonymous.

In “A Mother’s Song,” the same woman describes impossible choices. “I know a woman made black, blue with bruises, picked up a gun, shot that man while he slept. Then there was one, child needed the doctor. No money, no health care, she chose embezzlement.”

Several songwriters were allowed to attend an IPMW fundraiser concert, thanks to community leave sponsors. By law they could not, however, perform the songs and melodies they’d written. (Sus Long and Mike Conner arranged the songs, because they had instruments and recording equipment.) Nor could they present their own testimonies. Instead, Hardworker band members and IPMW staff memorized and voiced what the women had written.

IPMW Chaplain Sarah Jobe introduced and sang “When Job Was a Prison Chaplain.” This humorous yet sad story-song imagines Job of the Bible ministering in prisons. His friends say, “You could be preaching on TV. God knows it pays better.”

Jobe, however, said, “I get to work and worship in a congregation full of regrets—but committed to making beautiful work and a better future. Christians rarely get a chance to share profound depths of faith with each other across prison walls. But music travels. If you learn someone’s song, you can sing it wherever you are.”

Use all of Scripture

When Long and Conner occasionally led worship on Sunday nights at NCCIW, they realized how few hymns or contemporary Christian songs resonate with the women’s experiences. In most worship music, Conner says, “God is almost always gendered as male, and the Bible stories we tell are about men.” Church music often deals with abstract concepts. Yet the Bible includes stories about violence against women, revenge, addiction, abandonment, and wrongful death. The Psalms include honest lament, anger, and doubt.

Reading those passages in the songwriting classes was insightful and healing. “The Genesis story about Lot impregnating his daughters led to personal stories about incest, the role of alcohol in sexual abuse, and the tendency of abusers to isolate their victims. These women had a profound ability to read stories from all sides,” Long says.

The NCCIW women wrote songs about the God-fearing Hebrew midwives, Shiphrah and Puah, who defied Pharaoh’s order to kill all Hebrew baby boys. They wrote songs about the wise prophet Deborah and courageous homemaker Jael, who killed Sisera, the Canaanite army commander. They riffed on psalms of lament and praise.

“Music, sounds, and rhythms can say and touch feelings that words cannot. Loss is not foreign to the story of faith. Life takes things from you. You will be afflicted, tried, and not always see it coming. Studying difficult passages offered space for class members to process losses they’d been carrying for years, and brand-new losses. One member’s dad died during the summer of our class, but she wasn’t allowed to leave prison to attend his funeral. So she wrote a song,” Conner says.

Writing songs about life’s messiness modeled what few outside congregations are brave enough to do. “Having your crimes on display as a matter of public record is a shared experience for these women. Many people who aren’t incarcerated have similar experiences but try to hide them. When a woman writes a song honestly exploring her situation, she might feel alone. But raising our voices to sing it together is an act of compassion and empathy,” Conner says.

Besides drawing from the whole Bible, the women’s songs showed a balance of musical styles and emotions. Styles ranged from spoken word and rap to sweet ballads, blues harmony, and rock.

Concerts opened with Kellie Ledford’s “Weary.” Accompanied only by simple percussion, it sounds like a prison camp work song. Its plaintive words include, “I’ve been chained up so long now. Lord, please let me go home…Can’t lift my head, I’m in shame. God, help me, I’m weary, and I’ve got no one to blame.”

Linda Turnage’s testimony explained that she’d rededicated her life to Christ before coming to prison and had begun preaching as an evangelist. “I was living on disability after a car accident that left me with many broken bones. Someone told me I could support myself by selling my prescription drugs. I didn’t like to take them myself. Eventually someone turned me in, so they could avoid prison. I ended up with a seven-year sentence,” her surrogate said.

Turnage’s “To Follow His Command” follows the pattern of a lament psalm, with its classic turn from anguish to trust. It begins, “Where is everyone I need, in the worst time of my life?” Its chorus ends, “So I’m calling on you, Jesus, to take me by the hand. And as I’m walking down that lonely road, I’ll follow your command.”

Veronica Rackley has been in prison since 1999. Her testimony praised God for delivering her “from traps in prison designed to take me out” and helping her “choose to rise above the madness and choose joy.” Her rollicking “He Is Worthy” calls worshipers to “dance like David danced.”

Conner and Long say they’ve been surprised at how deeply people connected with the women’s songs during concerts at white and black churches, fundraisers, a Beer & Hymns event, and a preaching festival. “It truly is powerful when words of life and hope emerge from the places we least expect, when faith feels grounded in true, daily struggle against the powers of death,” Long says.

She adds, “These songs reveal that anyone can offer a testimony in song to God. They remind folks on the outside that they, too, have a story worth telling and a faith worth expressing.”

Luverta Gilchrist’s “Love Continues, Based Off Psalm 100,” was the first to fly through NCCIW walls. She wrote the catchy song for vacation Bible school at the church she attended before going to prison.

In “He Wore Three Crosses,” Rebecca Small declares her praise, love, and trust. She thanks God for “many undeserved blessings.” Then she asks God to bring her son to greet her at heaven’s gate. The chorus is: “He wore three crosses that he had made in jail. He wore them so proudly alone in his cell. No, I’m not ashamed. See, I’m locked up too. Lord, that’s where we both grew closer to you.”

Regina Bridges’ testimony explained that she never told her parents about sexual abuse that began at age nine. Years of sexual and domestic abuse led her to choose men who continued the cycle. “In my failure, fear, hopelessness, and misery, I committed what I am here for now. But I am glad to say that, today, I know my value and my worth—just as every single one of you must know your value and allow no one to disrespect, put down, or use you,” her surrogate said.

Bridges’ “I Chose You” traces her path from “love-scarred broken promises” and “blood-stained walls” to the love Jesus offers. Jesus is the “I” in her chorus: “I chose you for my bride. I chose you to be by my side. In the good and the bad, I’ll be holding your hand. For you, I’ll bleed and die. For you, I lay down my life. My beautiful bride, I chose you.”

Long and Conner say many of these songs are still sung in NCCIW weekly worship. Some songwriters are writing new songs. Others are leading in worship, song, or dance and inspiring peers to find their voice. And some hope to work as worship leaders upon their release.

Sus Long is an associate pastor at Union Grove UMC in Hillsborough, North Carolina, and the online marketing director for Local 506, a concert venue in Chapel Hill. Mike Conner is a licensed local pastor in the United Methodist Church, appointed to four small rural congregations in Bahama, North Carolina.

Their Vital Worship prison songwriting grant resulted in a songbook with 25 songs, including “God of Every Daughter.” Legal questions about creative property of prisoners have so far prevented recording and selling the songs. You can hear several songs in this concert video on the IPMW Facebook page. Transcription and distribution weren’t part of the grant, but Sus Long and Mike Conner have PDFs and chord charts for some songs.

The song “Lazarus” is on the Hardworker band’s debut record, Go Alone. As a duo, Long and Conner are working on albums of “religiously-inflected” music, lullabies, and Christian music.

For more biblical insights from incarcerated people, read Bob Ekblad’s Reading the Bible with the Damned and Chris Hoke’s Wanted: A Spiritual Pursuit Through Jail, Among Outlaws, and Across Borders.

Feel free to print and distribute this story at your staff, board, adult education, social justice, or worship meeting. These questions will help people start talking about how to connect with Christians inside prison walls. 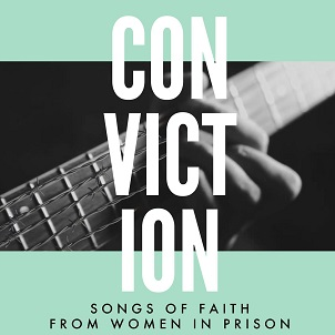