Tony Alonso notices gaps between what we sing in worship and how we live, including how we choose bilingual songs.

Tony Alonso is a Roman Catholic composer of liturgical music, and a Ph.D. candidate in theology at Emory University, Atlanta, Georgia. His music appears in hymnals and compilations throughout the world. In this edited conversation, he talks about creating and choosing bilingual worship music connected to life in our world.

What’s an example of a gap you’ve identified in liturgical music?

Most of the music I write emerges out of very mundane practical needs, like an acclamation or a psalm for which I haven’t been able to find a musical setting that suits the needs of my particular pastoral context. But sometimes my own discernment of the needs of the world through the prism of scripture evokes a song as well.

What’s something you’ve written to express, as you put it, the needs of the world?

I was 21 at the time of the 9/11 attacks. The grief, empathy and common bond of love and solidarity that emerged after the attacks quickly hardened into fear and a misshapen desire for retribution at any cost. It soon became clear that American reaction to an act of unthinkable terror would be even more terror—war. And I remember being surprised and saddened that the church was so silent. I rarely heard any intercessions, bulletin articles, preaching, hymns or anything else that raised a gospel-rooted objection to more violence.

Wrestling with the church’s silence led me to write a song called “Will the Circle be Unbroken?”. The final verse is an expression of a Eucharistic hope that flourishes both in and in spite of Christian action in the world. The questions I asked in the song’s two first verses would only intensify in the years to come.

How can or does music mirror who we are (or should be) as Christians or congregations?

The apostle Paul urged early Christians to persevere in faith by persevering in song. Paul knew what we all know when an advertising jingle gets stuck in our heads, or when we learn all the lyrics to our favorite songs. Music anchors language into our hearts. To let the Word dwell in us richly is to sing the Word in all its fullness in all the seasons of life. While I’m careful not to romanticize the power of music—because I think the ways in which it is received and internalized can vary widely depending on a range of factors—I take its ability to anchor language in our hearts seriously.

Recent research into music and the mind teaches us that music making helps the body remember even after the mind has forgotten. For Christian congregations, this is so crucial. Our musical language expresses who we are and who we hope to be in the world. Attentiveness to both the incongruence between the hymns we sing and the lives we live, as well as to the theological gaps in our own repertoires, can serve as a kind of communal confession of the work we still have to do.

What choices do you make when composing bilingual music?

As a composer of liturgical music, I always begin with the words, because I believe deeply that the music should be at the service of the word. I often start by speaking the words to determine the most natural speech-rhythm. In bilingual music, melding the natural patterns of two languages is complex. I think of a word like “communion” in English, “comunión” in Spanish. In English, the accent is on the second syllable, but in Spanish, it’s on the last. So setting that word correctly in both languages in the same piece of music is almost always going to trip up native speakers of both languages. Trying multiple settings in multiple meters and rhythms is crucial to determine what will feel most natural. Like all the music I compose for living and breathing assemblies to sing, it’s a lot of trial and error.

I am a firm believer in the importance of copious revisions both before I introduce something to an assembly and after. That moment you first hear them sing it back to you is incredibly informative. It teaches you what you did that helped or hindered their participation. In bilingual music, it requires a double attention to the complexities of both languages.

What should music directors think about when choosing bilingual music for worship?

I have lots of thoughts on this! I’ll offer just two quick suggestions. First, I think music directors should avoid hymns with lots of words. Shorter refrains, acclamations and ostinatos [repeated melodic phrases] are much less intimidating than a long, constantly changing series of stanzas. Second, I think it’s important to look for songs that are native to the diversity of the community praying together.

For example, if all the songs of a service originated in the English-speaking traditions of the community and are simply translated into Spanish, then that communicates a lot about whose voice matters. Bilingual music is about more than just the words. Diverse styles, traditions and genres all matter. They tell more about who belongs and who does not than the words. Because full-time music directors are often from the dominant culture within a community, there’s an added layer of responsibility to forge relationships so the fullness of the community can be expressed in song. This happens best outside the context of rehearsals. Make time for a sing-along where folks share their “heart” songs. You’ll learn a lot and it will change how you prepare bilingual worship.

Sign up for the 2017 Calvin Symposium on Worship so you can hear Tony Alonso speak about bilingual songwriting, relevant worship music and a Catholic perspective on the 500th anniversary of the Protestant Reformation. Order Alonso’s bilingual choral anthem “Psalm 96: Proclaim His Marvelous Deeds/Cuenten las Maravillas del Señor,” which he was commissioned to compose for Pope Francis’ 2015 mass in Washington, DC. Watch “Singing Our Lives to God: Tony Alonso,” a 7-minute video. 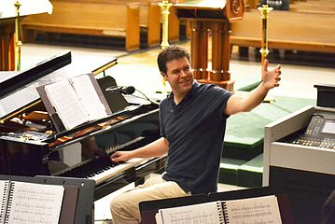 When Music Helps Us Hear the Bible
Sometimes the Bible rejoices when joined by song and sound! In this workshop, we experience a variety of simple ways music can help us receive the scripture in worship with our heads and our hearts.
Read more »

If You Want Justice, Work for Beauty
Really? In the face of so much global need, the arts are a necessity?
Read more »