Jesus calls us to love our neighbors as ourselves. What does that mean for conversations about injustices, including racism, both in the U.S. and around the world. Steve Prince creates visual art that can help us start talking. 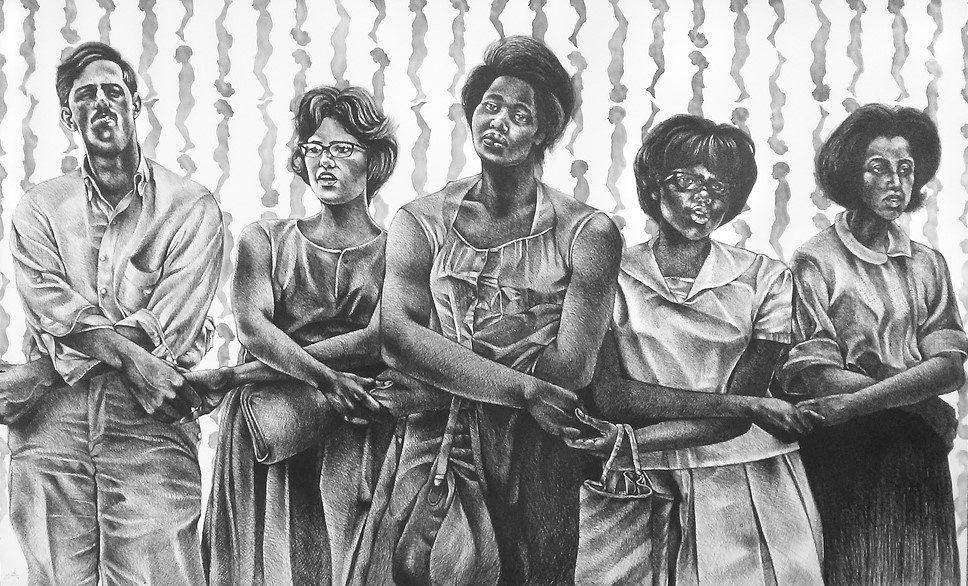 Steve Prince is an artist, educator and self-described “art evangelist” who grew up Catholic in New Orleans, Louisiana. He teaches drawing and printmaking at Allegheny College in Meadville, Pennsylvania, and he will lead workshops and display art at the 2015 Calvin Symposium on Worship.

How did you decide on the subject matter for your “Who Is My Neighbor?” drawing? Is it inspired by a historic photograph?

The Conte crayon drawing on paper was derived from a historical photograph of the 1963 March on Washington. I was struck by the beautiful interlocking of arms of people from different ethnic backgrounds. The image was taken as the event ended, and everyone was singing the Negro spiritual "Lift Every Voice and Sing." I created a larger-than-life image to accentuate the immense weight that common men and women carried to evoke change in the stultifying system of racism.

What symbolic elements did you embed in this drawing?

The original photograph was taken in front of the iconic Lincoln Memorial. I replaced that structure with black male and female bodies stacked and packed in a slave ship. Their bodies symbolically represent a root issue, race and representation, that we have to deal with in America. The chains of slavery are transformed into the linking of hands across ethnic and gender lines.

How might your drawing help people talk about not just recent events and injustice, but also about long-term, systemic issues of justice?

I believe the core issue—as it relates to Trayvon Martin, Rodney King, Amadou Diallo, Michael Brown, Latasha Harlins and the list goes on—is a spiritual issue of principalities functioning in our nation. I hope my drawing will assist us, as a people, in grappling with deep-set divisions in our nation. Brave people on both sides of the conceptual fence sacrificed their lives to challenge hegemony. Cameron J. Anderson on How Beauty Reveals God
Some churches think of beauty - apart from nature - as superficial, or a distraction from how God calls us to live. Cameron Anderson makes a case for how beauty and visual arts can help us encounter God more deeply.
Read more »