The COVID-19 pandemic has complicated death-related issues in the Navajo Nation. Even so, affirming all that's good about "walking in beauty" gives Navajos on the Jesus Way a bridge to comfort people bound by fearful Navajo taboos about death.

As European American Christians and Indigenous Christians step away from missionary and "missioned to" identities, it's increasingly clear that Christians in every culture can learn from each other. The Christians best equipped to bring the gospel to a community often share a language and culture with those they seek to reach. That's certainly the case when traditional Navajos ask Navajo pastors for help with funerals—a request that has increased since COVID-19 arrived in the Navajo Nation.

The Navajo Nation has the largest tribal land mass in the U.S., and it recently surpassed the Cherokee Nation in having the most enrolled members. Unlike many Indigenous nations, Navajo people were able to return to their ancestral lands, situated between four mountain ranges in the Four Corners area of Arizona, Utah, Colorado, and New Mexico. Navajo is a term coined by Spanish colonizers. When speaking among themselves, Navajo people refer to themselves as Diné, which means “the people.”

The Beauty Way and the Jesus Way

Richard Silversmith, a Navajo who is a commissioned pastor of Christian Indian Center in Denver, Colorado, writes and speaks about overlaps and gaps between Indigenous spirituality and European American Christianity. In a Do Justice blog post titled "Emergences," he uses Paul’s words in Romans 1:19–20 to remind readers that Indigenous people knew about God long before missionaries and colonizers arrived. Silversmith, his wife, Susie, and his sister, Darlene, were part of a 2018 gathering that led to a position paper about being fully Navajo and fully Christian.

At Rehoboth Christian School in New Mexico, teachers from diverse cultures have been studying biblical themes that resonate across cultures in their contexts. They found that the Navajo concept of Hozho, sometimes translated as “walking in beauty,” is much like the Hebrew-derived Christian concept of shalom. Both concepts teach that goodness and flourishing depend on right relationships among the Creator, creatures, and the whole creation.

Stanley Jim and his wife, Sharon, helped start the Red Mesa Leadership Development Network to train more Indigenous pastors and preachers in the Christian Reformed Church in North America. He now pastors Window Rock Christian Reformed Church (WRCRC)  in Window Rock, Arizona, capital of the Navajo Nation. Jim notes that Christians in some cultures divide life into sacred and secular. However, he says that Navajos view everything as sacred, which is why he embraces the Reformed theological concept that God is active in "every square inch" of the world.

Being fully immersed in his Diné language and culture helps Jim build relationships with people whether or not they are Christian. Like other WRCRC members, Jim cites his clan memberships when meeting other Diné people. "I use the traditional value of learning which related clans we have in common. So I call them my brother, father, grandma, or whatever. Knowing our clan relationships links us together and gives us a sense of belonging. From then on, conversation is much easier," he says.

Fear and taboos about death

Navajo teaching sees death, especially for someone who lives to an old age, as a natural part of the life cycle. It views burial as a "replanting into Mother Earth," according to Mortuary Services and Funeral Planning: Advocating for the return of Navajo Traditional Burial (p. 15), an extensive 2020 report by the Navajo Nation Human Rights Commission (NNHRC). Yet the report acknowledges "the fear and trepidation that Diné often feel when confronted with death" (p. 16).

Stanley Jim agrees. "Traditional Navajos aren't so much afraid of death itself as they are of the dead," he says.

Navajo historian Wally Brown explains that Navajo people developed a great fear of dead bodies after the Spanish arrived in the late 1500s, bringing viruses, diseases, and epidemics for which the Navajo had no immunity.

"As many as 85 percent of our people perished,” Brown says in a Navajo Traditional Teachings video on death and grieving. “That time is called 'running from death' in our oral history. If you had a relative that was sick and you tried to provide them with care, it was more likely that you would also contract the sickness and perish. That's why people were encouraged to leave the ill person and let them die alone. . . . Our people are not even willing to talk of the dead or talk of the ones that have passed on. And they don't like to prepare the body for burial."

Jim hasn't seen much change in traditional Navajo death taboos since he wrote about it for the June 1992 issue of Reformed Journal.

"Among traditional Navajo people,” he says, “it is taboo to handle dead bodies. Traditional burials take place almost right away after death. Only four people—all from the matrilineal clan of the deceased person—get involved. Two wash and prepare the body, and two wash and remove the body from the hogan [traditional home].

"They don't dig holes for bodies,” he explains. “Instead they put a small child's body in a tree and cover it with a blanket. They put other bodies in a rock crevice and cover it with brush and stones. They use cedar branches to erase their footprints all the way back to where they came from, so the spirit of the dead person won't follow. For four days after death, you don't weep or sob or call that person's name. Otherwise the person will feel called back and then haunt you for preventing their spirit from reaching the underworld on time." In generations past, families would even kill the deceased person's horse and abandon the hogan where someone died.

Jim says that most people today die in hospitals or nursing homes, but "for those that die at home, no one moves to a new house. But it is still taboo to talk about it."

The coronavirus pandemic hit hard in 2020 and has complicated funeral dynamics for everyone in the Navajo Nation.

Diné people have been susceptible in part because the U.S. Congress consistently allots far less than is needed for Indigenous healthcare and infrastructure, according to a USA Today investigation on racism and COVID-19. Also, as Dee Dixon, a Navajo radio announcer, explained to The Verge, the traditional people who most needed accurate information were reluctant to talk about COVID-19, as if talking about disease or death would bring it to pass.

Rather than refusing to speak the name of a person who died, Navajo Christians have always had deaths announced almost immediately by radio. About 14,000 on-reservation Navajo homes still lack electricity, so they depend on transistor radios and car radios for news. Even before the pandemic, the NNHRC report found that transportation and burials are the largest expenses for reservation residents. Radio death announcements usually include instructions on where or how to help pay for burials. The Navajo value on relationships spurs people to give generously, especially among clan members.

Jim says that Christian Navajo funerals have always drawn large groups of friends and family together. However, due to cultural values, such as respecting elders and future generations and valuing the common good, people observed stringent lockdowns, wore masks, and got vaccinated. Despite their desire to gather in grief, they honored capacity limits that affected even graveside ceremonies. By April 2021, the Navajo Nation had made a remarkable turnaround. Then the COVID-19 Delta variant surged in border towns where many reservation residents must travel to shop or work. The Navajo Nation had to reinstate pandemic limits, which once again limited opportunities to worship and mourn together.

During the worst surges, hospitals ran out of beds and sent patients to larger cities. That meant it cost more to ship dead bodies back to families. Pastors and medicine men died so weren't available to lead ceremonies. Funeral homes and mortuaries ran out of caskets and refrigerated space. Some reservation cemeteries filled up, but the Navajo Nation no longer permits modern burial on homesites.

Stanley Jim is well-known as a local and regional pastor and as a country gospel musician. Honoring all that is good about Navajo culture has helped him connect with many people. Jim understands the dynamics among multiple generations that live in one household but have varying beliefs and practices regarding death.

"I have conversations and relationships with many traditional people, so they often come to me with prayer requests and help with burials,” he says. “They have nothing to do with the dead but know that Christian leaders can handle bodies. I've been doing mostly graveside services during the pandemic. Burials give me the opportunity to talk about life after death. Standing at the mouth of a grave has a strong impact in Navajo culture. I can say, 'This grave has opened its mouth to us again. The grave is never satisfied. We keep feeding it, but it won't be satisfied till Christ comes back.' Respect is a key value for us, including respect for other religions, so people are very respectful and appreciative when I talk about our hope in the resurrection." 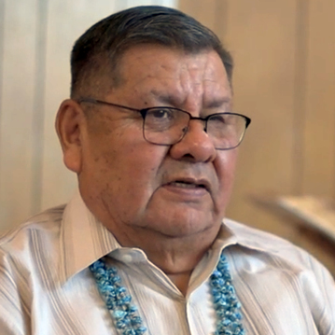