Three church groups started out as separate congregations sharing one building. Now regularly-scheduled joint worship helps them see themselves as members of one body in Christ.

Chicago’s Edgewater neighborhood has always been home to many immigrants. When Granville Avenue United Methodist Church (UMC) began there in 1905, most immigrants came from Europe or Russia. Now most newcomers to Edgewater are African, Asian, or Latino. Edgewater has one of the largest U.S. Ethiopian and Eritrean populations. And the Chicago metro area has the nation’s third highest concentration of people from India.

Granville Avenue UMC is adapting to these changes. In the late 1950s it had 400 members. Now the congregation averages 70 to 100 people at its 11 a.m. Sunday service. But the building also hosts a Gujarati Methodist congregation at 9 a.m. and an Eritrean congregation at 4 p.m. (Gujarat is a state in northwest India. Eritrea is a small country in northeast Africa.)

“We’d smile at each other in passing. One older Gujarati man always had candy for children in the ‘main congregation.’ But we didn’t know or worship with each other,” says Dasia Skinner. That changed after the church received a grant from the Calvin Institute of Christian Worship Vital Worship Grants Program.

Skinner, who at the time chaired Granville’s music department, was the grant project director. She says that the journey to enjoying regular joint worship required preparation, invitation, cooperation, and growth through change.

“Our goal was to implement a project with worship songs and prayers reflecting the language and culture of each congregation into the main [American] service. We hoped this would deepen our understanding of worship, so we could experience ourselves as one body of believers coming together to serve the God who died for us all,” she says.

Skinner describes the Granville congregation as an intergenerational church of African American, biracial, and white members, mostly working class. Even before applying for the grant, Granville members read and discussed Building a Healthy Multi-Ethnic Church by Mark Deymaz.

“Deymaz’s book helped us understand that the Word of God is objective, but music is subjective. Since worship music reflects one's emotion and opinion, we as Americans cannot judge a different culture’s worship music as wrong or ineffective. As long as worship music lifts God’s name in praise and is scripturally sound, it is acceptable,” she says.

The grant team held one-on-one conversations with leaders, elders, and youth from each congregation. This helped them learn more about each other’s language and worship practices.

One of the first grant events was “Walk in Their Shoes,” in which native English speakers signed up to attend a Gujarati or Eritrean service. Several reported that they felt uncomfortable, because they didn’t understand the language or what was happening in the service. This motivated the Americans to think hard about how to plan joint worship services that included songs, prayers, and Bible readings in each language—so everyone felt welcome.

Allen Barbour, Granville’s pastor, says that prayer is an essential element in preparing for joint multicultural worship. “Besides defining physical and spiritual goals and objectives for worshiping together, you need to pray together to make sure the congregation is of one accord. I also suggest meeting with leaders of the congregations you plan to invite into joint worship,” he says.

The American Methodists took a cue from the Gujarati Methodists, who usually have a meal together after worship. They planned a combined service followed by a Hawaiian luau-themed meal and invited everyone to wear leis (flower garlands) or Hawaiian clothes. Most Gujaratis and a few Eritreans attended. At the luau, people drew table numbers from a bag to ensure that tables had a mix of cultures.

Each table had a list of conversation starters, such as “Please share a story or memory from your childhood” and “Why is worshiping with different cultures pleasing to God?” Event leaders passed around a microphone, so people could share stories from each table.

“Not many of the older Gujarati women speak English. Many younger Gujaratis and Eritreans speak English, so they translated for older people. Over time, as we shared more combined worship and meals, tensions settled down and fellowship grew,” Skinner says.

Johnson “Johnny” Christian, pastor of Gujarati Fellowship New Faith Community (UMC), recognizes that shyness can prevent congregations moving from preparation to invitation. “Here is my advice to other congregations who want to worship jointly. The only way to outgrow shyness about worshiping in front of other cultures is to just start worshiping the Lord. Don’t worry about others. People are more accepting than you think, and they all want to learn how other cultures worship the Lord. We can all learn from each other.

“It is phenomenal to see others worship in their own way, and every way is right. The different hand gestures, facial expressions, and musical instruments are outstanding, culturally fascinating, and unforgettable,” Christian says.

The Gujarati and American congregations belong to the same UMC district (geographic grouping of churches) and both meet on Sunday mornings. Maranatha Eritrean Christian Fellowship (aka Maranatha Church Chicago) worships bilingually in Tigrigna and English. It is part of an Eritrean church network that holds frequent events. Maranatha meets at 4 p.m., because many members are taxi drivers who work overnight or on Sunday mornings. This dynamic prevents some Eritreans from attending combined worship at 11 a.m.

Yet, leaders from all three congregations do their best to participate in combined worship. The first joint service included translations of Gujarati songs, and some of those members led parts of worship.

During February, the congregations observed Black History Month—and also studied Gujarati history. People were especially interested to hear how Christianity was introduced to India and Gujarat, which is majority Hindu. In March, when their event schedule allowed, Eritrean youth were asked to plan and lead joint worship.

Skinner says that the best combined services include worship leaders from each group. “They lead parts of the liturgy in their language and it is translated for others. Three pastors prepare sermons on the same topic. Listening to each in their language for 10 to 15 minutes takes patience. But it’s awesome that each language includes the word hallelujah.”

She and Barbour describe the desire to overcome the challenges of combined worship as itself an act of worship. “We normally have good services on Sunday, but something happens in the Spirit when we come together. You may not be able to understand everything said in a different language, but you can sense in the Spirit that the words align with God,” Barbour says.

The two Methodist groups now worship together monthly. The Eritrean congregation joins in about twice a year.

“In the beginning, there was a language barrier between the groups. However, over time, the congregations have become closer to each other,” Christian says. An enthusiastic millennial from his congregation wondered why the project hadn’t begun sooner. An older member commented that God cares more about love for God and others than how worshipers talk or look.

“We look forward to joint worship. It’s truly a joy, a foreshadow of the real worship that will take place in the kingdom of heaven,” Christian says.

Skinner describes Eritrean worship as expressive and lively with spontaneous dancing. The Gujaratis wear cultural attire and use traditional instruments, such as cymbals, double-headed hand drums, and a harmonium (hand-operated pump organ). “Gujarati music reminds me of a chant, sort of a call and response led by a male singer. Our American services are more structured, with congregational songs led by piano and drums,” she says.

The Gujarati and Eritrean congregations move freely and use applause to give their pastors feedback during sermons. Skinner says that observing such freedom inspired American worshipers to give their pastor more response as well. Now some feel free to stand in the aisle during songs or go to the altar for prayer.

“Worshiping God individually has its own spiritual euphoria, but when we come together in combined worship, it intensifies a ‘one body, one spirit, one voice’ experience—while also appreciating cultural differences in song and language,” Barbour says.

According to this brief history of Granville Avenue UMC, the church was once known as “The Little Country Church of the City.” This postcard shows the church interior in 1978, and the same painting still graces the wall behind the pulpit (chancel wall).

Sign in to Facebook to catch the flavor of worship by watching clips from a Gujarati Fellowship New Community Church’s Christmas service. Listen to sermons and songs on Maranatha Eritrean Christian Fellowship’s YouTube channel

Feel free to print and distribute this story at your staff, board, music, or worship meeting. These questions will help people start talking about how to experience oneness in Christ by worshiping with other cultures: 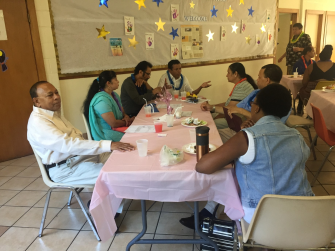 Multilingual Worship: How to include many languages
Learn why and how congregations are using multiple languages in the same worship services—rather than having each cultural group worship alone in its own language.
Read more »