Mentoring Church Musicians: Each one teach one

Whether you have musical gifts to pass on or want to improve those you have, you know how important mentoring is for church musicians. And good training helps church musicians enrich worshipers' experiences.

We all start somewhere.

James "Jimmie" Abbington was five years old and living in a small coal-mining town when his mom taught him to play piano chords. Abbington says that when he was a college freshman, "doing more playing than studying," Wendell Phillips Whalum struck up a conversation with him.

Abbington credits his mentor with influencing him to transfer to Morehouse College in Atlanta, learn about the Christian liturgical year, explore the breadth of African American music, and earn a PhD.

In 1984, Whalum invited the organ student to the annual Hampton University Ministers Conference, the largest interdenominational conference for African American preachers and church musicians. In 1985, Abbington became conference organist, and, in 2000, was appointed conference co-director of music. That same year he began The Church Music Academy to attract undergraduate and graduate music students to the Hampton conference.

At age three Charsie Randolph Sawyer was lifted onto a communion table so worshipers at her Church of God in Christ congregation could see her while she sang solos. Now a music professor, Sawyer served as a soloist and workshop leader at the 2005 Hampton conference.

The conference for black preachers interested in worship began in 1914 at Hampton University, a historically black college in Virginia. Music was a vital part, and, in 1934, tracks were added for choir directors and organists. The June meeting now draws more than 10,000 people, about a fifth of them church musicians.

Visitors pack a stadium for the Thursday evening concert, where the message comes through loud and clear that these musicians are part of a living tradition. The 2005 printed concert program explains that music directors Abbington and Royzell Dillard were mentored, respectively, by Wendell Whalum and Roland Carter and that Carter was a protégé of Charles H. Flax, for whom the concert is named.

"I remember coming as a little boy to the Thursday evening concert when Roland Carter was music director. He was the mark of all I wanted to be. From Jimmie Abbington I've gotten my whole attitude of what a church organist should be-well versed in classical musical literature and able to do every genre with excellence," says Omar Dickenson, minister of worship and fine arts at Bethel Baptist Institutional Church in Jacksonville, Florida, and co-director of the Church Music Academy.

He and co-director M. Roger Holland II, who is minister of music, dance, and drama at Calvary Baptist Church in Jamaica, New York, say the academy pays conference fees for music students so they can experience the gamut of African American church music and envision careers in church music.

The concert choir is made up of hundreds of conferees who meet during the week to rehearse new music. Academy interns sit on stage near the instrumentalists, cocooned by older singers behind them and the beaming audience facing them.

As each intern introduces himself or herself, applause and murmurs swell, especially for interns who attend Westminster Choir College or who have chosen to earn a masters.

During the electrifying concert, Abbington and Dillard share the baton with conductors from other historically black colleges or with composers who direct their own songs. Wayne Robinson led the choir in his recent "He is God," a contemporary gospel setting of Psalm 46 with the memorable line "It is good to know that God is God and he is still in control."

But Abbington wants to do more than remind them of the diversity of music within African American denominations.

"The Yale Institute of Sacred Music, the Hymn Society in the U.S. and Canada, and the Calvin Symposium on Worship have helped revive interest in psalm singing. Beyond praise and worship repertoire or the occasional anthem, black Protestant churches rarely sing psalms. So I chose psalms as this year's concert theme," Abbington said.

He also nudged conferees to try global music. He opened the conference with "God is Here!" written by British hymn writer Fred Pratt Green and sung to Abbot's Leigh.

"Using a Taizé piece, 'O Lord Hear My Prayer,' was definitely a first. The congregation was in awe. They really worshiped by it.

"We have not sung much global music, not even African music. That's sung more in mainly white churches," Abbington says. He used "Hallowed Be Thy Name," a West Indies arrangement of The Lord's Prayer, as a prayer response. Though it's number 664 in the African American Heritage Hymnal, "few people knew it.but they liked it," Abbington reports.

"The church of the new heaven will not just play hymns or just play contemporary music. As our world becomes more global, we in the church need to look beyond our own traditions," he adds.

Charsie Randolph Sawyer agrees with Abbington's advice to learn widely. "All music is for all people. As Christians it's high time we look beyond stigmas and stereotypes and look at the heart. When I was growing up in Youngstown, Ohio, my family had no color lines," she says.

That perspective freed her to respond to teachers who took an interest, such as Rose Kelley, an elementary teacher who won a performing arts award and took young Charsie to the White House.

"During college, Rosemarie Kascher taught me German lieder. Her mom would bake for me and her dad would correct my German. Years later she told me that because of me coming to their home, her dad no longer resented people of color. Rosemarie Kascher took me to New York so I could see the Metropolitan Opera. She took me to the Smithsonian Institute and Library of Congress, where I developed my lifelong interest in black composers," Sawyer recalls.

Willis Patterson, an African American basso profundo, was the first person of color she saw sing art songs. He arranged for her to go to Interlochen, enter a doctoral program at the University of Michigan, and sing on a CD that accompanies a book he compiled on African American composers.

Just as others have invested in her, Sawyer invests in younger people. She is a professor, vocalist, scholar, and church choir director who also directs the Calvin College Gospel Choir and involves students in her research on black female composers.

About half the musicians at Hampton cannot sight read. Many are naturally gifted but volunteer in churches that cannot afford to pay or train them. Sawyer reminded people in her Hampton sectionals not to say, "We're black, so we don't sight read.or we don't do that kind of music."

She points out that learning by rote, as worshipers do when they sing words projected on a screen, develops the memory. But learning to read notes reveals musical patterns and opens more doors.

Academy co-director M. Roger Holland explains, "Just as illiteracy limits life experience, formal training in music gives limitless possibilities. You can learn the music of Beethoven, Brahms, Mozart, and Handel, as many of our Protestant churches do. You can explore the work of African Americans, such as Undine Smith Moore and Nathan Carter."

Training in pastoral work, theology, voice, and conducting helps musicians work more effectively with choirs. It helps them partner with pastors to match music with Scripture, sermons, and the church calendar.

The Hampton conference exposes interns to career options and pastors eager to hire trained musicians. "I've been playing organ since age 14 and have a mindset for worship but didn't think it could be a career. I went to college to become an actuary. I'm grateful that God intervened, I earned a graduate degree in music, and my church can support paid music staff," Omar Dickenson says.

Patrick McCoy, an intern with a masters from Shenandoah Conservatory, is glad for how God has led him since boyhood, when he rescued an organ from a dump in Petersburg, Virginia. He started picking out tunes that his mom sang in a Baptist choir. "A white friend took me to his church, where I heard a pipe organ for the first time. The sound stirred my soul. Jim Peak took an interest in me and groomed me," he says.

Peak, a dean at Baptist Theological Seminary in Richmond and part-time music minister, recalls that McCoy boldly asked to sing Handel's Messiah in a choir accompanied by the Richmond Symphony. Convinced that trained musicians are better able to fit music to their congregation's theological and worship contexts, Peak agreed.

"Patrick was largely self-taught but had good skills. He was enthusiastic and very teachable," Peak says.

Since then McCoy has introduced African American anthems to an older white Presbyterian congregation, where he is organist and music director. He has played, taught, or led music in Lutheran, Methodist, and Disciples of Christ settings. "I'd like to introduce more churches to the music of Eurydice Osterman and Diane White," he says.

Yet the Thursday concert embodied what church musicians must always remember: music and musicians are means to worship God, not objects of worship. Perhaps that's why Charsie Sawyer, improvisationally-gifted interns, and a counter-tenor were not named in the program or from the stage, even though their solos pushed people to their feet and moved them to tears.

Sawyer understands from experience how much Christian musicians must balance: using your gifts for God, being open to ministry opportunities, earning a living, doing your best, setting boundaries, taking care of your body, focusing on ministry more than performance.

"With the people I mentor, I often talk about the difference between excellence, which I ask for, and perfection, which we will only reach in heaven. Even if you feel tired and not in good voice, God can use you," she says.

Sawyer says she saw in the Hampton interns what she wishes for more musicians. "Seeing their beautiful spirits gave me hope. These young musicians understand what it means to be trained-but they remember their roots and know who gives the gift."

James "Jimmie" Abbington suggests the following resources for worshipers who want to experience the breadth of music sung in African American churches:

Charsie Randolph Sawyer says that, perhaps more than any other musicians, vocalists feel exposed and vulnerable when they perform, because their instrument is their body. The Singer's Ego: Finding Balance between Music and Life by Lynn Eustis addresses this issue.

Long interested in black composers, especially females, Charsie Randolph Sawyer recorded all the tracks on The Unknown Flower, which features classical female composers. She is working on a book of voice solos by African-American women composers.

Hear a sample of Omar Dickenson's up tempo "The Blood" (scroll down to sixth song). Besides serving on staff at Calvary Baptist Church in Jamaica, New York, M. Roger Holland II is artist in residence and Gospel Choir Director at Union Theological Seminary and arranges songs for worship.

These questions will get members talking:

What is the best way you've found to help worshipers and music leaders explore your church's music tradition and go beyond? 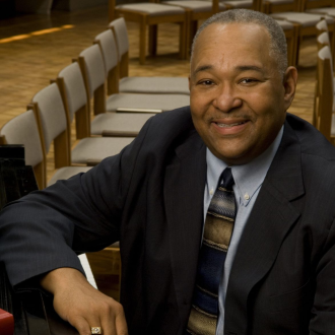 Worship and Discipleship: As It Was…Is…and Shall Be
Nine church leaders and scholars recall and predict hot topics in worship, discipleship and discernment from 1995 to 2025.
Read more »