Joel Carpenter on Artists as Prophets and Seers of Hope

Twenty artists from North America and South Africa created “Between the Shadow and the Light: Artists’ Prophetic Responses to South Africa Today.”

The project was organized by Joel Carpenter, director of the Nagel Institute for the Study of World Christianity at Calvin College in Grand Rapids, Michigan.

How does this traveling art exhibit reveal what God is doing?

Each artist conveys thinking and emotions as we encountered each other and the South African scene.

Jonathan Anderson’s painting of the Robben Island political prisoners’ compound is starkly lit, with sharp lines and angles. The place looks God-forsaken, yet it held Nelson Mandela and Walter Sisulu for years. This painting asks not what God is doing but where was God in that?

Has this body of art helped you see Christianity in fresh ways?

Jackie Karuti’s painting, “Stefaans’ Letters,” shows prison door grates, bloodstains, an outstretched hand and scripts of letters in the background. The colors and images are harsh and violent, but the scripts speak of remorse and beg forgiveness. Jackie says it conveys a story of grace.

What about symposium guests who want to understand the exhibit but don’t feel confident in “reading” art?

The exhibit pushes us to dig deeper into South Africa’s horrid depredations and its witness to amazing grace. It has artists’ statements throughout, and the catalog provides more insights. And some artists will be at the symposium to field questions! 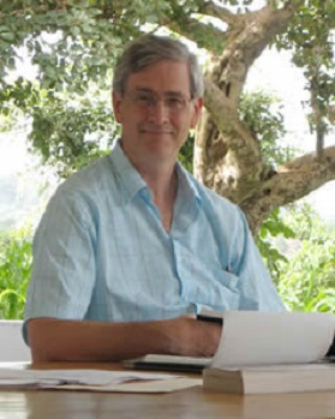 Bruce Theron on Word and Worship, a South African lectionary resource
Across cultures and denominations, South African churches are growing in unity—thanks to the nation’s first ecumenical sermon and worship resource written in English.
Read more »

Joel Carpenter on Matter and Spirit Exhibition
When U.S. artists and Chinese artists traveled together in China, they learned the unique challenges of expressing Christian faith through the visual arts in each other’s contexts.
Read more »