Kiran Young Wimberly is an American Presbyterian minister who served in Belfast, Northern Ireland, for over six years. She arranges psalms to Irish, English and Scottish melodies and has recorded two Celtic Psalms albums with Irish Catholic musicians.

What do lovers of Celtic music in other parts of the world not understand about music in Northern Ireland?

KC: Only a handful of Irish folk tunes have been put to hymn texts in our tradition, mainly Londonderry Air and Slane (for “Be Thou My Vision”), which we sometimes put to a Celtic sounding rhythm. We would tend to use more Scottish tunes like Ye Banks and Braes and O Waly Waly, which we use for “When I Survey the Wondrous Cross.”

Since the Presbyterian Church comes from the Scottish Celtic tradition, the piano accordion would be more acceptable than a concertina. Bagpies would be favored over uilleann pipes. A bodhran is still viewed as more an Irish drum, where the lambeg drum is most definitely Protestant. Its very presence can incite antagonism because of its association with Twelfth of July loyalist parades that honor a Protestant king’s victory over his Catholic rival in 1690. The Parades Commission negotiates how to ensure that parades are carried out peacefully. They often request that the lambeg drum not be played whilst walking past a Catholic chapel, out of respect for that culture. When people have requested using a lambeg drum in a worship setting, I have said no.

KYW: It brings together Protestants and Catholics to sing psalms set to traditional Irish and Scottish melodies. This music enhances the experience of cross-community worship.

KC: The analogue to Celtic psalms in Northern Ireland might be something like a colonized culture re-learning their traditional folk tunes—and then realizing that God can speak as much through this music as through what is perceived to be “sacred” music. The English composer Ralph Vaughan Williams gathered up English folk tunes in the early 20th century and arranged them for well-known hymns. He adapted the English folk tune Kingsfold for the hymn text "I Heard the Voice of Jesus  Say," by Horatio Bonar.

How did you two meet and start to share Celtic psalms?

KC: Kiran and her husband came from the United States to work as ministers within the Presbyterian Church in Ireland. Kiran was given a placement in a church where I had previously been assistant, so we met up to exchange notes on our experiences there. We’re both musicians and stayed in touch. Kiran’s Celtic Psalms group came to our church, Kilbride Presbyterian, and performed a Psalms concert for our congregation.

How are these new Celtic psalms being used in Northern Ireland?

KC: They are changing Protestants’ and Catholics’ views of each other. During the Celtic Psalms concert, I played the piano for one song but hadn’t yet introduced myself as minister of the church. At the supper afterwards, one of the Catholic band members started asking around my congregation if they thought I would be interested in playing in his local pub in Dungannon, about an hour’s drive west of our church. He was super embarrassed to find out I was the minister. My own congregation members were much more amused that he thought I could get a job at his local pub! Yet, in a simple way, this broke down perceptions of clergy and enabled two different audiences to exchange humor.

KYW: At our first Celtic Psalms concert, we had a mixed crowd of Protestants and Catholics—church members, family, friends and musicians. These people normally wouldn't have a reason to be in the same room together. Afterwards, a Presbyterian elder came up to me and said, "I never thought this music could belong to us." And a Catholic musician said, "I never thought I would hear Protestants singing our songs." From those two comments, I could tell that this music was pushing against certain unseen barriers between Protestants and Catholics in Northern Ireland.

People have sung these psalms together in churches and events. The music was featured in an ecumenical service for peace broadcast on Irish television to at least 40,000 viewers. Our Celtic Psalms group was also part of a BBC documentary on hymn writing in Northern Ireland.

How and why might non-Irish Christians sing Celtic psalms and hymns in worship?

KC: Singing a Celtic psalm might be a reminder to continue praying for peace in Northern Ireland. Also, there was a strong missionary impulse in our Irish saints. Singing the ancient St. Patrick tune to the hymn text “I Bind unto Myself Today” (also known as St. Patrick’s Breastplate) gives worshipers a strong sense of God being at work in all things. The lyrics encourage us that no matter where we go, we are bound in his presence and protection.

KYW: Celtic music in itself is soulful. It reaches people in a way they find hard to express. Traditional Irish and Scottish songs get at our sorrow and our joy. They fill us with inspiration or comfort. Combined with the soulful words of the Psalms, we are able to bring those deeper emotions before God in prayer. Keith and Kristen Getty (Protestant) and Liam Lawton (Catholic) have also been exploring a traditional Irish song in their worship music.

What do you hope worshipers will experience or learn in your Calvin Symposium on Worship vespers service?

KC: I hope that the Celtic Psalms will travel to revive the souls of our worshipers and that, in singing them, we connect to God’s tender compassionate heart for us.

Register for the 2017 Calvin Symposium on Worship so you can hear Karen Campbell and Kiran Young Wimberly speak, and attend their vespers service, Celtic Psalms: Finding Light in the Darkness. Listen to songs from both albums, and buy albums and chord charts on the Celtic Psalms website. 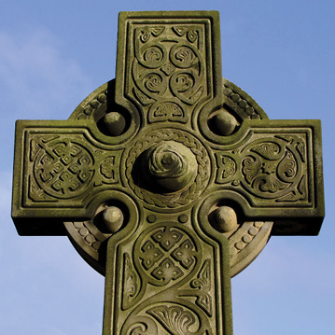 Music and Worship Help Heal Northern Ireland
The Presbyterian Church in Ireland is using music and worship to overcome the legacy of the Trouble in Northern Ireland. You can apply their insights to political and other differences that divide Christians in your context. A feature story exploring the role of music and worship in healing.
Read more »

Rejoicing in Lament
Four pastors and scholars discuss wrestling with incurable cancer, cancerous racism and life in Christ. They offer insights into how congregations can follow the lead of the Psalms in practicing candid lament as an essential part of deeply joyful worship.
Read more »