Indonesians on Diversity among Indonesian Christians

Indonesia comprises thousands of islands on both sides of the equator. Its Christians and seminarians come from many islands, languages, and cultures. They have a lot to learn from each other.

Carolien Eunice Tantra teaches piano, music ministry, and worship design and leadership at South East Asia Bible Seminary (SEABS) in Malang, Indonesia. Her husband, David Dwi Chrisna Damping, is a staff member in the seminary’s Sunergon Mission [community service] department. In this edited conversation, they talk about the diversity among Christians and SEABS students in Indonesia.

Many people outside Asia don’t know that Indonesia has the world’s fourth highest population and the most Muslims of any country. What else surprises them about your country?

What surprises them is our rich cultural heritage. The food—satay, soto (traditional soup), gado-gado (salad)—is so good, and the people are so hospitable. Some are amazed to know that most Indonesians speak at least two languages, usually Bahasa Indonesia (the national language) and their own local language (mother tongue).

Since Indonesia is 87 percent Muslim, people are amazed to see so many Christians and many big churches here. In Southeast Asia, we have the largest Protestant population and second largest Christian population, after the Philippines. Christian churches in big cities are often located in shopping malls or office buildings, in part because it’s hard to get a building permit for places of worship. Charismatic and Pentecostal churches started “the mall trend,” but now some evangelical churches are in malls also.

Where do your SEABS students come from?

Most of our 260 students come from different islands in Indonesia, including Sumatra, Java, Kalimantan, Bali, Sulawesi, East and West Nusa Tenggara, Maluku, and Papua. Most are from large cities, such as Jakarta, Surabaya, Bandung, and Medan. Some come from rural areas and villages. We also have 47 students from mainland China enrolled in our Mandarin program for theological students.

Our seminary was established in 1952 to provide Mandarin-language theological training for Chinese Christians in Indonesia. The majority ethnic group at SEABS is still Chinese Indonesians. Most of their families migrated from mainland China three to five generations ago. Some are Peranakan Chinese, a Chinese ethnic group that came to Indonesia before western colonization and blended in with local cultures. Some Peranakan Chinese identify as Sundanese, Manadonese, Javanese, or even Papuanese.

In 1967, our seminary opened its doors to non-Chinese Indonesians and began translating classes into Bahasa Indonesia. When the government banned Mandarin (now it’s allowed again) to be used in educational institutions, we enrolled even more non-Chinese students. Today SEABS is proud to be multicultural and multiethnic. We now have students from Bataknese, Karonese, Javanese, Papuanese, Sumbanese, Manadonese, and other local ethnic groups.

What denominational traditions do SEABS students come from?

Our seminary is non-denominational with strong evangelical convictions and a heavy emphasis on Reformed theology. Most of our students come from Chinese background churches, such as Gereja Kristen Kalam Kudus (Holy Word Christian Church), Gereja Kristen Abdiel (Abdiel Christian Church), and Gereja Kristus Yesus (Christ Jesus Church), to name a few. Those churches started among Chinese people who spoke Mandarin or a Chinese dialect, but now include Chinese and non-Chinese Christians.

We also have students from non-Chinese background churches, such as HKBP (Protestant Bataknese Christian Church) and GKJ (Javanese Christian Church). HKBP, founded by German Lutherans, is Indonesia’s largest Protestant denomination and has over 4 million congregants. GKJ is the church of our friend Ester Pudjo Widiasih, who has presented at the Calvin Symposium on Worship and is program executive for spiritual life for the World Council of Churches. Most students come from Reformed-oriented churches, but some come from Methodist, Mennonite, and Pentecostal-charismatic churches.

What denominations and cultures do the two of you come from?

Carolien grew up in Jakarta in a Chinese Indonesian family. Her parents are pastors who graduated from SEABS in 1970s. She is a member of Gereja Kristus Yesus (Christ Jesus Church), a Chinese background church. Bahasa Indonesia (the national Indonesia language) is her mother tongue, and she speaks a bit of Mandarin with her parents.

David was born into a multiethnic family of Javanese, Sundanese, and Sangirnese. He grew up in Purwakarta, West Java Province. He is a member of Pasundan Christian Church, which started as Sundanese Church. He speaks Bahasa Indonesia and Sundanese. We met in the seminary in 2010.

Besides our work at the seminary, both of us minister in Chinese background churches in Malang, Carolien as pianist and David as pulpit supply.

Why does Indonesia have so many denominations?

From our perspective, Indonesian Protestants fall into three groups. The oldest are Indonesian ethnic churches planted by Dutch and German missionaries in the colonial eras. Every ethnic group has its own denomination, such as GKI (Indonesian Christian Church) for the (mostly) Peranakan Chinese, GKJ for the Javanese, GKP for the Sundanese, and so on. Most of these denominations have Dutch Reformed roots, and some are Lutheran.

The second group is evangelical churches and churches that speak Mandarin or a Chinese dialect. Most non-Chinese evangelical churches were started by American mission agencies, such as Christian and Missionary Alliance churches. Most denominations that now use Mandarin started as churches for specific dialect groups, such as the Hokkian church, Hakka church, Cantonese church, and so on.

Given that most Indonesians are Muslim, do your students share a common experience of being treated as a religious minority?

Some do, but certainly not all. Almost two-thirds of people in North Sulawesi and Papua are Protestant. On some islands, entire villages belong to the same church.

Every summer, our students get a two-month internship on an island, ranging from Sumatra in the west to Papua in the east. They are fully involved in church life—preaching and leading worship, teaching Sunday school, doing pastoral visits, and more. We make sure that each student gets at least one internship in a congregation very different from what they grew up in.

Look at the diversity of Indonesian languages in this grid of different words for the same concepts. Read Ester Pudjo Widiasih’s chapter, “A Survey of Reformed Worship in Indonesia,” in Christian Worship in Reformed Churches Past and Present, edited by Lukas Vischer. 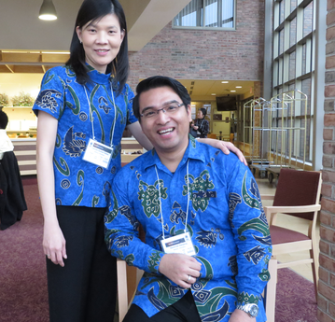 Rediscovering the Beauty of Rest
Resources in the Bahasa Indo language from the Malang Choral Festival II held in Indonesia.
Read more »

Indonesian Musicians on Inculturating Indonesian Christian Worship
Christians who bring the gospel to other cultures often struggle to discern the difference between the essence of Christianity and its cultural packaging. That is true in Indonesia as well.
Read more »