Whether translating the Bible from original Hebrew and Greek or writing spiritual theology, Eugene Peterson says he has one aim--getting Scripture into the hearts, minds, arms, legs, and mouths of men and women. A feature story exploring Eugene Peterson's view on Christians reading and internalizing the Bible.

Here’s something you know instinctively. You can memorize every bit of cereal box information about ingredients and nutritional value. But for that cereal to do you any good, you have to pour it out, top it with milk or cream, and eat it.

Eugene Peterson says it’s the same with the Bible. “This is a book to be experienced, savored, dallied over. If we’re always studying something, then we’re going to miss it,” he says.

That’s why Peterson, author of The Message Bible paraphrase, woos readers of his latest book to read the Bible the way a dog chews on and plays with a bone, groaning with pleasure.

In Eat This Book: A Conversation in the Art of Spiritual Reading, he offers insights into language, explains how to live—not just read—the Bible, and illuminates biblical truths sometimes lost in translation.

Delighting in words to live by

He loves to tell how he grew up Pentecostal in small town Montana. His dad was a butcher. His mom was a gifted song leader and preacher. Most of the people he knew were poor. Few had gone past eighth grade. But they were faithful Bible readers and brilliant storytellers.

“I grew up thinking everything in Scripture was livable, the way you lived your life. Each year my mom made me a butcher’s apron that looked like Samuel’s robe. We were sacrificing animals all the time, so I thought of my dad as a priest. He acted like a priest and lived like one. He knew everyone’s name,” Peterson recalls.

At age 12, he saved up to buy a Scofield Bible. Then in 1948, while Peterson was in high school, he got a copy of J.B. Phillips’ Letters to Young Churches, a translation in paraphrase of the New Testament epistles. Its immediate language immersed Peterson in the Bible’s “marvelous sentences and metaphors” and helped him read devotionally.

Eventually Peterson learned how to read the Bible in the original Hebrew, Aramaic, and Greek. He expected to spend his life teaching ancient languages. But his pay as a seminary professor wasn’t enough to support a growing family on the East Coast, so he took on a part-time associate pastor job.

The head pastor was “such a man of God. He loved Jesus. As I was with him, I thought, ‘I’ve always wanted to do this, just never realized it was done like this.’ ”

Three years later Peterson and his wife, Jan, moved to Bel Air, Maryland, and invited people to join them in their basement for worship. The church that started in their home became Christ the King Presbyterian. After nearly 30 years pastoring that congregation, Peterson left to teach at Regent College in Vancouver. He’s since retired to rural Montana. But he’s been writing all along and is still at it—with almost 30 books to his name and 6 million copies of The Message sold worldwide.

Learning to do spiritual reading

Most of us who call ourselves Christian own Bibles. We honor them and believe they are the Word of God. Sometimes we even read them. Peterson says it’s hard to get people to read the Scriptures on their own terms, as a revelation from God meant to form how we live. He chose the metaphor of eating Scripture, because that’s what God asked Ezekiel, Jeremiah, and John to do.

He recommends lectio divina as a way of metabolizing Scripture into “acts of love, cups of cold water, missions into all the world, health and evangelism and justice in Jesus’ name, hands raising in adoration of the Father.”

Spiritual reading starts, however, by recognizing how often the Bible asks people to speak and listen. “If we are to get the full force of the word, God’s word, we need to recover its atmosphere of spokenness,” he says. This includes reading aloud, listening to spoken Scripture, memorizing it, and imagining the sights, smells, and sounds surrounding those who first received God’s word.

Peterson’s methods are at odds with how American Christians view spirituality and the Bible. Some know what the Bible says about God and vigorously defend the Bible…yet don’t offer their lives for the text to work on. Others see themselves as spiritual insiders who no longer need the text, because they can hear God whisper between the lines. This choice leaves them without a text to shape their souls.

Although Peterson talks about reading almost mindlessly, soaking up the word like medicine through an IV tube, he also makes a case for exegesis.

As he writes in one essay, “Exegesis in an act of love. It means loving the one who speaks the words enough to want to get the words right….Exegesis doesn’t mean mastering the text, it means submitting to it; not taking charge of it and imposing my knowledge on it, but entering the world of the text and letting the text ‘read’ me.”

In Eat This Book, Peterson describes biblical translators as God’s secretaries. About 5,000 words are used in the Greek New Testament, and, till roughly a century ago, 500 of them seemed unique to the New Testament.

Those 500 words didn’t appear in classical Greek literature. Some scholars called the mystery words “Holy Spirit language.” Others said the “unGreek” words proved the New Testament was written in Hebrew and later translated into Greek.

In 1897—well after the King James Version came out—archaeologists discovered papyri scraps in an Egyptian garbage dump. These discarded grocery lists and ancient books on housekeeping contained the 500 mystery words, the koine or “common Greek” of ordinary speech.

The koine discoveries solved the gap between words preserved in Greek literature and the earthy language that Paul and Mark often used. So, although awe, respect, and mystery pervade the Bible, the Holy Spirit inspired many passages rooted in how real people talk and live.

Schnekloth calls Peterson “the Kathleen Norris of the clergy.” Both Norris and Peterson are liturgical. They’re “on long theological spiritual journeys grounded in a place,” Norris in South Dakota, Peterson in Montana. And they are “fundamentally essayists who mix the personal and conceptual, the subjective and objective.”

Mixing worlds makes sense to Peterson. He says that pastors who get to know their people’s stories, families, and ways of life have the best chance of connecting “the inherent messiness of congregational life” with the Bible’s stories.

“Basically, pastors are translators,” he adds. And translation is the best defense “against letting language inflate into pomposities and artifices no longer current with the way we express our ordinary lives.”

Letting the Bible form your life

Peterson himself “is one of those people who is what he writes about. He’s utterly unaffected by prestige. He models God’s ministry of presence and sacrament,” says Trygve Johnson, dean of the chapel at Hope College in Holland, Michigan.

After devouring Peterson’s books for years, Johnson got the opportunity during seminary to be mentored by him. “It was my deepest and best desire to form a relationship with a man I’d known only through his books. God manufactured this in a way I never could have. It helped me to trust in God’s providence.

“Listen to Eugene talk. He’s not anxious. He’s very low key. He’s deeply Reformed in the Barthian sense that he trusts in God’s sovereignty and the Bible’s power to speak. He knows that God is at work before we are. He’s taught me how powerful and freeing it is to read the Bible as words of relationship,” Johnson says.

Peterson often notes that hospitality is the heart of a church’s life and the Eucharist is its sacramental focus. He says that for 48 years he’s apprenticed to his wife, Jan, to learn “her intuitive Eucharistic hospitality. Her meals are works of art. We’ve had runaways live with us. She makes guests feel like family.”

The Petersons show that same hospitality each summer to Johnson and his wife, Kristen. “We go for a walk to what he calls ‘Luther’s Seat.’ You look out over the Flathead Valley and see the spirit of the land. In the same way, Eugene Peterson gets you out of the trees of the verses and helps you see the whole landscape of Scripture. It’s really inspired and it all fits together in unity, each piece subservient to the whole,” Johnson says.

Eugene Peterson began translating the Bible into contemporary language so his congregation would feel invited into the work and language of God. You can read The Message like a novel or in verse-numbered paragraphs. It has brief helpful introductions to each book. Read Isaiah 1, Romans 9, or Philippians 4 for a taste of The Message.

Peterson’s several books for pastors who want to be in relationship with God, not just do ministry, include The Contemplative Pastor: Returning to the Art of Spiritual Direction and Five Smooth Stones for Pastoral Work.

Listen to songs based on Peterson’s psalm translations. Read about his influence on the band U2. Read an article about Peterson as a "contemplative Christian."

Trgyve Johnson says he learned from Eugene Peterson to be formed by Scripture and from Tim Brown, a Western Theological Seminary professor, to memorize it. As the Sunday evening preacher for student services at Hope College, Johnson often does a ten-week series on just two or three chapters.

What is the best way you’ve found to get the Bible “into the hearts, minds, arms, legs, and mouths of men and women”? 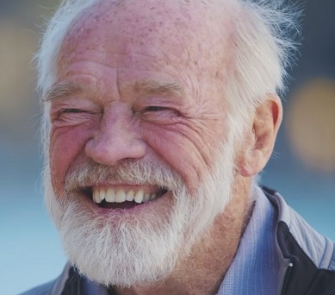 Symposium 2006 - Conversation with Eugene Peterson
This conversation between spiritual friends explored the art of writing, hospitality, and the pastoral life. Presented at the 2006 Calvin Symposium on Worship.
Read more »

Psalms in Worship: God knows we need help praying
Discover why more congregations are following Christ's example of praying the Psalms in worship. A feature story exploring the use of the Psalms in Christian Worship.
Read more »