Across cultures and denominations, South African churches are growing in unity—thanks to the nation’s first ecumenical sermon and worship resource written in English.

Bruce Theron pastors a bilingual English-Afrikaans church in Kuilsriver near Stellenbosch, South Africa. He serves as program manager of Ekklesia, an ecumenical organization affiliated with the University of Stellenbosch. He is also moderator-elect of the International Congregational Fellowship. In this edited conversation, Theron talks about Ekklesia’s annual Word and Worship publication.

What is Ekklesia and why did it begin?

Ekklesia is an ecumenical center within the Stellenbosch University (SU) Faculty of Theology. Our training, research and publications focus on equipping ministers who have varying levels of education. We function as a network center between SU and churches.

We help SU live out its commitment to ecumenicity and community interaction. When we started Ekklesia in 2010, the university was predominantly Dutch Reformed. Now it has agreements with the Uniting Reformed, Presbyterian and Anglican denominations in South Africa—and Ekklesia works with 19 denominations.

We believe that the churches in South Africa make a unique contribution to our country’s future and community. Improved theology and expertise will go a long way towards assisting churches to play their part. Our Word and Worship lectionary publication is one of our most important and practical ways to promote greater unity among churches.

Why focus on the lectionary? Do many South African churches follow the Christian year?

Early in my ministry, my biggest dilemma was choosing a sermon text each week. Then I was introduced to the Revised Common Lectionary (RCL), and my problem was solved. For churches that hold the Word of God in high regard, the lectionary helps ministers provide much better theological teaching so that congregations grow spiritually. But it takes a lot of energy and discipline to follow the liturgical year. I’ve attended services where they read only one to three Bible verses in the entire service.

Rediscovering the church year is relatively new in many churches in the Reformed tradition, including  my denomination, the United Congregational Church  of South Africa. It used to be that most churches celebrated Christmas, Good Friday, Easter and Pentecost—maybe Reformation Sunday but not Advent, Epiphany or Lent.

When and why did you help start the Word and Worship lectionary series?

The Dutch Reformed Church had already been publishing the RCL-based Woord en Fees in Afrikaans. Many ministers in South Africa haven’t gone to seminary and don’t have access to exegetical or liturgical resources to prepare weekly sermons and worship services. Nor do they all speak Afrikaans. So Ekklesia director Coenie Burger and I decided to put together an English language version.  Rather than translate the Dutch Reformed Woord en Fees into English, we invite men and women ministering in a range of denominations to write liturgical suggestions and sermon studies for a given Sunday. They offer commentary on the Sunday’s four lectionary readings and provide ideas for sermon outlines—not completed sermons. We released the first manual in time for Advent 2011. Our editor is Keith Griffiths, a retired Anglican priest who is general secretary of the Church Unity Commission.

There are three lectionary cycles—Years A, B and C—so do you just keep selling the same three editions?

No. We write a fresh edition each year because we want to address our current context. For example, South Africa’s worst drought  in 30 years began in 2015, and it hasn’t ended yet. So for the current Third Sunday in Lent, we focus on Christ as living water—a very powerful symbol in our arid land. The liturgical notes include a litany in which several responses from the people begin, “Living waters, flood our…” The liturgist responds by sprinkling water toward the congregation.

Also, we decided that although our Hearing the Word section comments on all four lectionary passages for each Sunday, we’ve chosen one to be the key text so as to provide continuity of material throughout the year. Both WW and Woord en Fees are using the same set of key texts. Congregations using WW know that, all over South Africa, churches worshiping in English and Afrikaans are engaging with the same scripture readings.

How does Word and Worship apply the lectionary to a South African context?

In the current Year A, some key texts touch on experiences that are common in South Africa, such as how Jesus was a refugee or how people deal with poverty. For other key texts, ministers can draw parallels between the importance of naming a child in the Bible and in many African cultures. Names carry destinies and a family’s hopes and fears.

The key text on Transfiguration Sunday, 2 Peter 1:16-21, addresses a community that was in crisis, wondering whether God would or could intervene in world affairs. Likewise, the Church in South Africa sometimes fails to trust in Christ’s prophetic power. Instead we remain silent against oppression and corruption.

Can you also describe some South African liturgical suggestions in WW?

Liturgical notes for some Sundays suggest an introductory sentence about gathering in God’s name, followed by this greeting: “Minister: God sees you! People: God sees everybody and everything!” The note explains that the Zulu greeting “Sawubona” literally means “we see you.” People and churches around the world observe World AIDS Day on December 1. Many churches focus on hope when lighting the second Advent candle. So for the Second Sunday of Advent, we offered a few sentences that ministers could use to tie our hope of Christ making all things new to the millions of lives touched by the HIV/AIDS pandemic.

Many denominations recognize care for creation as a mark of Christian mission. During the Season of Creation, we suggest using “Benedicite Africana (The Song of Creation).” One verse is: “Tall yellowwoods and mighty baobabs/Erica, proteas, daisy, and winter lily fields/Wildebeest and buffalo, soaring might of eagle/meerkat at your watch, hills of termites/Give thanks to our God who is good.”

How has Word and Worship been received?

WW has been formally endorsed by the Church Unity Commission, to which all of the larger churches belong, and is being used more widely each year. Those who follow it are using more of scripture at a time. For our first edition, we printed 1,200 copies and then 150 extra. They sold out really quickly. The print run has been increasing each year. Thanks to a new partnership with the Dutch Reformed Church’s Christian Literature Fund (CLF), we’ve been able to reduce costs and expand marketing. It worked out well for the CLF, too, because they wanted to get into the English-language market. We hope that the CLF will soon add electronic or app editions that are cheaper than the print edition.

We’re thinking of adding in some texts that the RCL skips. We already have sections on special days and weeks, such as Africa Day and Week of Prayer for Christian Unity. We are developing material for special services on our April 27 National Freedom Day and December 16 Day of Reconciliation.

Our goal is to put WW in the hands of as many ministers as possible. We want educated congregations that can reflect theologically on current issues.  We’re trying to get clergy together in weekly, ecumenical groups to discuss WW. It promotes ecumenical bonds among local churches when ministers share common joys and tensions and build community support systems. We’re trying to negotiate with National Radio Pulpit to have a weekly program where three or four ministers discuss WW for the upcoming Sunday.

Buy a copy of Word and Worship. Read the Africa Bible Commentary. Brush up on South African history. 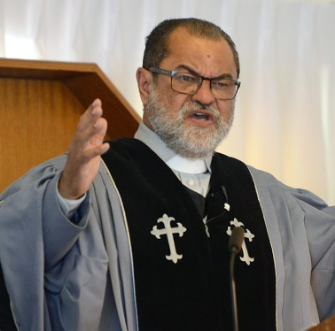 The Christian Year: Six Steps for Getting Started
So now, here is your dilemma – you are leading a congregation that worships pretty well, but they don’t know much about the Christian Year. Outside of Advent, Christmas, Lent, Good Friday, and Easter, there’s isn’t much else about it. And what’s more, they don’t seem to miss it, or feel they ought to change things. And some of them are a bit suspicious of the whole idea. And besides, you don’t trust your knowledge about it all either, and you have no idea where to begin.
Read more »

A Random, Crazy List or Really Cogent Lections: Preaching the Revised Common Lectionary
In this session, the panelists discussed the structure of the lectionary system and the advantages and challenges of its use.
Read more »