Born and raised in the Dominican Republic, Jorge Lockward currently lives in New York City where he works as Director of the Global Praise Program of the General Board of Global Ministries, The United Methodist Church, and lectures on worship at Union Theological Seminary. Jorge was a committee member of the Spanish Language United Methodist Hymnal, Mil Voces para Celebrar and has served as consultant on other denominational hymnals. He is the editor of Regocíjate y Canta (1995), a collection of Latino worship choruses, Tenemos Esperanza (2001) a trilingual (Spanish, Portuguese, English) songbook and recording, assistant editor of Global Praise 3: More Songs for Worship and Witness (2004) and co-editor of For Everyone Born: Global Songs for an Emerging Church (2008).

He has served as member of the executive committee of the Hymn Society in the United States and Canada, (1999-2002), the consulting board for Reformed Worship Magazine & Calvin Institute of Christian Worship (1999-2002), and the board of directors of Choristers Guild (1999-2002).

As song leader and workshop leader, he models a passion for the ways congregational song both reflects and shapes the theology and praxis of the assembled community. Presently, he is the Minister of Worship for a new United Methodist church in the Northwest Bronx and leads the New York based ecumenical chorale Cántico Nuevo.

View all Resources or Publications by Jorge Lockward. 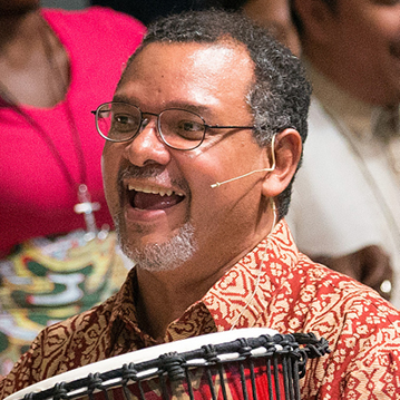