Sport and the Christian Life

Sport has a legitimate place in the Christian life.

Most people in North America interact with sport, and from not too far a distance. As young as pre-school, participants play sports in back yards and organized programs designed by YMCAs, private clubs, community organizations, and even churches. Sport invades our families, televisions, social media, careers and schools. Love, like, tolerate, hate or try to ignore it, we are all connected to this multibillion dollar industry. Sport is the reality series that has become a cultural mainstay, capturing hearts indiscriminately, and drawing new and unsuspecting converts daily.

Among the throngs of participants and fans are confessing Christians, people who view life as a gift of God’s grace and who earnestly desire to follow Jesus Christ in the day-today. And so, between halves, periods or seasons, some take a timeout to ponder the role of sport in the Christian life. They wonder about potential benefits and pitfalls. They wonder about affections and passions and the physical and emotional safety of sporting environments. They wonder about their own hearts, gripped by the joys and obsessions of competition, about poor players being pushed aside, excellent performers pushed ahead, and why sport can seem both underutilized and overdone at the same time.

Sport is always situated in a larger culture with serious and important things happening every day. But just as sport cannot ultimately drown out the concerns of the day, so supposed real life cannot deny the important place of sport in our humanity, our culture, and God’s world. While the Christian church has a well-documented history of both participation in and suspicion of sport, today’s sport enjoys a very favorable reputation among the faithful. Yet because of this, nagging questions about the day-today decisions in sport are hard to voice. And many do not feel they have the language or permission to subject sport to careful theological reflection. As a starting point, it is important to understand what sport really is.

Sport has a legitimate place in the Christian life

When my children were little, they would spend hours setting up toy houses and acting out the lives of “little people” characters, and I was in trouble if I intervened in the wrong way. To them, play was serious business. When children play they are completely immersed in the play world. Time stands still and the imagined environment is as real as the world around them. When observing the naturalness of children at play, one has to believe that play was a staple in the Garden of Eden.

Most philosophers and theologians agree: play is a part of human life, and play is hardwired by God into our created selves. In his famous treatise on play entitled “Homo Ludens,” or “Man the Player,” Johann Huizinga described play as something that adorns and amplifies human life; he also called it necessary.

And play is not only for children; the spirit and action of play are essential for young and old alike. When Jesus told his followers that they needed to become like little children, one can surmise that the playfulness of children was part of that message.

Though not the same, sport is derived from play and is a part of human culture. Sport has its origin in playfulness, but it also has agreed upon rituals, rules, and parameters for competition.

High profile professional sport, with its large crowds, abundant marketing, exorbitant player salaries, and game day spectacle has become a lens through which we view sport. But highly-paid, professional athletes often speak of trying to recover the joy of the game. Though sport has become their vocation, they realize that like the rest of us, sport started as an avocation. We are all built to play in some form, but not all will find delight in organized sport. For those who do love it, sport reveals our playfulness, our desire to be excellent, and our desire to belong.

Competition is an essential element of sport

I used to play tennis twice a week with two different opponents. Both were good friends and superb tennis players. The first would begin each match by pestering me all the way to the court and explaining how I was about to be annihilated. The other was quite opposite. He showered me with praise and adulation. “You are my hero,” he would say, “I want to play just like you.” I knew, of course, that both of my opponents were full of baloney. Sometimes I won; more often I lost, but the jabs inspired me to perform my best. Despite the verbal sparring, they were my friends, and we shared faith and a love of tennis. And we were competing.

For Christians, it is the competition of sport that makes us uneasy, and well it should. In every contest, there is a winner and loser. The winner is happy and receives the prize; the loser is dejected, hurt, and potentially humiliated. To take something for yourself in the act of winning, on its face, appears inherently selfish. As Christians, aren’t we called to deny ourselves, put others first, and be servants? In what other context do we openly celebrate another’s loss? Put this way, competition seems morally indefensible and spiritually inconsistent with the path of following Christ. C. S. Lewis gave a harsh warning about competition by equating it with pride. He noted that the pleasure of pride is not just in having something; it is in having more of it than the next person. Destructive pride does not come from accomplishment, but comparison to others. Doesn’t that sound like sport?

Because of the uneasiness of competition, Christians are tempted to rationalize sport by saying that “winning doesn’t matter.” In other words, whether I win or lose, I get the joy of the experience, the drama and flow of the moment, the satisfaction of getting better, and the accompanying moral and spiritual development. In this view of sport, everybody wins, the agony of defeat is thwarted, the joy of winning is contextualized, and the prize is irrelevant.

Except, no matter what we can get our brains to think and our mouths to say…we know better. Deep down, we know that trying to win is a weak substitute for actually winning. And at the end of the day, it does matter – we want that trophy, the green jacket, the claret jug, the Stanley Cup, the gold medal. In sportsmanlike manner, we say, “It’s just about playing the game.” But though our sportsmanlike words have merit, they also have a tinge of inauthenticity, one that the Christian community needs to confront in order to make sense of sport.

My oldest daughter is a reader; she consumes fiction. I happened across her one day when she got to a certain point in a novel, and she was sobbing and shaking. As a caring father full of appropriate empathy, I reminded my teenage daughter that “it’s only a book” (bad father moment). She was obviously not comforted by my words, and was also a bit offended. This book mattered deeply to my daughter, and the made-up characters were important to her life. To her at the time, it wasn’t “only a book”, it was a story that affected and changed her. Similarly, when my grumpy son takes a little too long to get over a loss in sports, I’m tempted to say “get over it, It’s only a game.” He may need to get over it, and it is a game, but it is not insignificant because he risked enough to care about the outcome. In sport, if we don’t engage, invest, and be willing to bear the pain of loss, sport has little chance to move us in any satisfying way.

When we accept the invitation to care, we enter the world of sport where competing to win is part of the agreement we make with opponents. Some days we win, some days we lose, and we return the next day to try again. Sport philosopher Scott Kretchmar identifies the chance to play again or next time as part of the redemption of sport. The winner and the loser both look forward to the next game, next season, or next challenge. If not caring about winning is the Christian path toward redeeming sport, we are not being honest with ourselves or others. As sport competitors, we are willing to bear the jarring, difficult, and sometimes utterly painful feeling of losing on a given day, precisely because we want to preserve the triumphant, explosive, and sweet jubilation of victory the next time we play. If we don’t care about winning, sport is no longer sport.

Because sport matters to us, the passions of sport can lead to negative outcomes. For instance, like many other human endeavors, sport has a way of being all-consuming. Whole families can become intoxicated by sport success or opportunity afforded through sport, and when sport decisions compromise deeply-held values or require lengthy rationalizations, these are warning signs that sport has moved from appropriate affection to idol.

But, it’s also true that the passion of sport can lead to meaningful and enriching experiences. Sport is a wonderful option for those who enjoy participating as a player or fan. The primary purpose of sport is not hard to see among competitors: people love to play. We desire to excel, to belong, and yes, to win, or at least to invest enough to have a chance.

For more reflections, see the Declaration on Sport and the Christian Life at https://sportandchristianity.com. 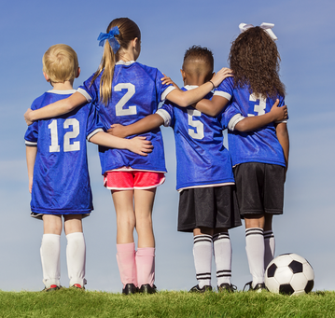 The Church as Community
A panel of Calvin College students addressed what Christian community means to them, how it relates to the church, why it matters in the world, and how they may think differently about the church and Christian community than previous generations. They also reflected on the significance of worship in terms of establishing and maintaining Christian community both within and beyond the church’s walls. Presented by Todd Cioffi and panel at the 2013 Calvin Symposium on Worship.
Read more »