Praying for the worldwide church was a priority at the 2014 Calvin Symposium on Worship in Grand Rapids, Michigan. Leaders from many nations described how to pray for their churches and fellow citizens. Three of them, all Presbyterian pastors, also gave brief interviews.

Karen Campbell is pastor of Kilbride Presbyterian Church in Ballyclare, Northern Ireland, and convener of the worship panel for the Presbyterian Church in Ireland. She helped found the annual Big Sing event to promote singing old hymns in new ways. She suggests subscribing to Mission Ireland’s weekly Prayer Focus email to know how to pray for her country.

In this brief audio clip, she explains how violence has pushed churches to abide in Christ through prayer. 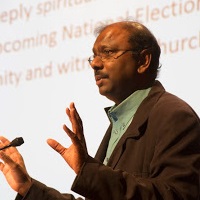 Jerry Pillay is general secretary of the Uniting Presbyterian Church in Southern Africa (UPCSA). In fall 2014, he will begin teaching church history and polity at the University of Pretoria. As president of the World Communion of Reformed Churches, he travels widely. Find current UPSCA prayer needs.

In this brief audio clip, he explains why prayer habits in South Korea deeply impress him. 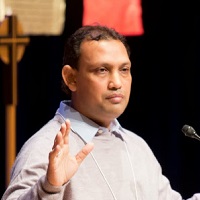 Eric Sarwar is an ordained pastor in the Presbyterian Church of Pakistan and is founder and director of the Tehillim School of Church Music & Worship in Karachi. He requests prayers that Pakistan will repeal its blasphemy law. Centre for Legal Aid Assistance & Settlement posts news about persecution of Christians in Pakistan.

In this brief clip, he talks about how Pakistani Christians faithfully pray for Christians in other nations.

The Worship Pastor: Thinking Through the Pastoral Dimensions of Worship Leading
Whether we know it or not, as worship leaders, we are pastors. The services we plan and lead have a formative effect on the worshipers with whom we gather weekly. The question is not if people are being formed by our leadership, but how.
Read more »

Mandy Smith on The Vulnerable Pastor
Christian leaders, especially pastors, sometimes feel bad about the gap between their ideal of Christlike ministry and the reality. Pastor Mandy Smith explains that honestly accepting vulnerabilities and human limitations makes room for God’s strength to be revealed in people and congregations.
Read more »