Angie Hong on Biblical Reconciliation through the Worship Arts

God calls all Christians and congregations to the ministry of reconciliation. Sometimes this happens best through the worship arts.

Angie Hong is a worship leader, speaker, and writer dedicated to exploring the lines of reconciliation, worship, and identity. She is pursuing an MDiv at Duke Divinity School and speaks regularly at conferences and retreats. In this edited conversation, she talks about what biblical reconciliation means and how our Creator gifts us to carry out this ministry.

No. I do not believe in the idea of racial reconciliation. People often like the term, because they think of it as a conflict about race that exists between a few individuals. They think we can just sit down and talk and all get along. But the concept of race was constructed as a systematic approach to privilege certain groups, depending on where they are on the white-black continuum. Talking about anti-racism, which means dismantling unjust systems built on race, often scares people.

I do believe in biblical reconciliation, which I began learning about years ago, when I was asked to lead worship for the annual five-day Summer Institute for Reconciliation at Duke Divinity School in Durham, North Carolina. Matthew 5 is a quintessential passage about reconciliation. It calls us to a posture of agreement and humility with each other. The work of biblical reconciliation only happens when we realize that we have been reconciled to God through Christ. God calls every Christian to this ministry.

What’s an example of how a church can live out some principles of biblical reconciliation . . . or not?

It’s hard to do well, especially since the work of biblical reconciliation has to be led by people on the wrong end of the power differential. I can give examples of how not to do it. It’s common for well-meaning pastors to go into an under-resourced area to save the city, do some good, and “get people back on track.” They move into a neighborhood without consultation or an invitation, such as a pastor who started a tennis program in urban Durham. It didn’t last long.

In conflict situations, Christians sometimes misapply Matthew 18 while ignoring power dynamics. I was harassed while applying for a job at a large church. I decided to report the person, even though I was really scared. The human resources team called me into a room to “try to resolve the conflict.” It was me, my husband, and four older white guys. I had to tell them all the humiliating details. Why were no women in the room with me? They were trying to address my harassment within the patriarchal system that creates (and overlooks) gender inequities.

Where do well-intentioned people miss the mark while aiming to make worship more multicultural?

We fail to recognize that biblical reconciliation is intersectional. It intersects with racial justice, gender justice, climate justice, and differences in denomination, education, sexuality, politics, geography, and so much more. In trying to avoid negative stereotypes, we essentialize. We try to put people in boxes as if one aspect of their identity can be honed down into a pure form. I’ve sometimes been pressured to be the quintessential Asian, or Korean, worship leader. They want me to bring in Korean instruments, sing just in Korean, and “lead in a very Korean way,” whatever that is.

Essentializing denies complexity. I am Korean. I am also American, a woman, a trained musical therapist, and a worship leader. As a prominent black pastor said to me, “There’s not a black community. There are black communities.” Also, biblical reconciliation doesn’t see differences as conflicts to solve. It affirms one another’s identity as God’s gift to community.

Moving on to reconciliation through worship arts, what does that include besides music?

The worship arts offer so much room for creativity—painting, drawing, playing with photography drones, creating new dances. I love the work that Stephen Proctor is doing with projection and visual liturgies. And being creative is a generative process.

In his journal article “Embodying the Artistic Spirit and the Prophetic Arts,” theologian Willie Jennings says we need to create cleansing images in worship. This might mean including more songs actually written by Koreans in Korean hymnals. It might mean normalizing images that may at first seem abnormal given our cultural tendency toward tribalism.

During Holy Week 2018, I wanted people to reconsider “the white Jesus.” Each day I posted a picture of Jesus to Instagram, drawing from different sources, like He Qi and an Aboriginal image. On Holy Saturday, I posted an image by a Chinese artist of Jesus washing his disciples’ feet. In Northeast Asian cultures that are shame-based and follow a Confucian social hierarchy, what does it mean that Jesus is serving me?

Can you share a story about biblical reconciliation through worship arts?

During a Duke Summer Institute of Reconciliation week, people were divided on an issue that causes a lot of hurt. We had a whole day devoted to lament, and our worship team created a litany to include different perspectives and diverse ways to enter into lament.

It was a very meditative service. An artist drew a broken jar on a huge poster. During worship we asked people to write their hurts on sticky notes and walk up and put their notes on the jar. We also had Bob Marley’s version of “By the Rivers of Babylon,” an orchestral ensemble piece by a Japanese composer, and an open crying-out-as-one-voice prayer. That prayer helped engage Koreans and some Africans and Latin Americans.

Do you have any stories from a church?

In Durham, North Carolina, I helped plant a multiethnic church called CityWell. We asked a member there to share about growing up learning American Sign Language (ASL) because his birth parents are hard of hearing. He led us in a very simple song and taught us the ASL. We played, sang, and signed it. This way of worshiping with our bodies really connected, and many people were in tears. It opened our eyes to the people who don’t feel included in our projected liturgies and wordy hymns. At CityWell, we have people who don’t hear well or have sensory processing disorders or can’t read.

Oh, it is. We live in very intense times. People are becoming more aware about intersecting issues around race, sexuality, and the #MeToo movements in church and society. I often wonder about the new icons of our day and time. In ten years, we’ll look back to see the worship arts that people created in response. When you look back on art created as an act of resistance, it can give future generations hope.

But doesn’t trying to address hard issues open up so many ways to do it wrong?

It’s true. There’s a lot of history, emotion, and anxiety in following Christ. People need to feel you understand and value them. Yet worship leaders still need to cultivate a community of change because Christ calls us to die to ourselves and our old ways. Building a multicultural team that practices worship reconciliation through the arts takes patience, grace, and cultural humility. It’s a long haul. We don’t always get it right.

Can you recommend any worship planning practice that helps?

When I was on staff as music minister at CityWell, we formed caucuses for three groups—people with disabilities, African Americans, and Latinx. Each met monthly for discussion, and I went to a different caucus each month, which meant I met quarterly with any given caucus. I’d ask whether they felt part of the congregation and how we could improve.

The people with disabilities helped me learn that not everyone is a linear thinker or appreciates a long theological service. They asked for fidget cushions, coloring pages, simple repetitive structures, and shorter choruses and songs. I learned from the black caucus that gospel music is far more than just gospel choirs. The Latinx caucus told me my Spanish pronunciation was pretty bad, but thanks for trying. Caucuses empower minority groups to engage in the larger body, not to further divide and seclude.

Do you have any final tips for churches just starting on this journey?

Try introducing new worship arts during Advent or Lent because people are often more open then. If you start using more visual art, it’s fine to use captions to give people more context and understanding. You don’t always have to use the traditional terms for what you’re introducing. For example, when Aaron Niequist discovered  the value of liturgy, he formed an experimental worship service called The Practice at Willow Creek Church. He knew some people would resist the idea of liturgy as “too Catholic,” so he never used that word. He also used songs people were already comfortable with, like “Ten Thousand Reasons.”

Read The Christian Imagination: Theology and the Origins of Race by Willie James Jennings and Culture Care: Reconnecting with Beauty for Our Common Life by Makoto Fujimura. Watch an interview (29:49) with Angie Hong while she was creative director of the Chicago campus of Willow Creek Community Church. 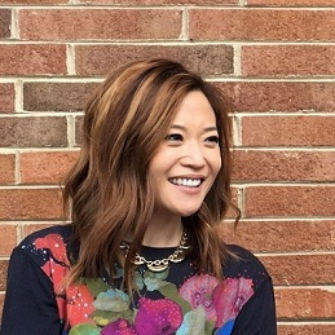 Angie Hong on Imagining Worship as an Egalitarian Zone
Christian worship services can support or contradict the biblical vision of the church as one body with many parts. Here’s how corporate worship can help worshipers practice equity across lines of gender, race, ability, socioeconomics, and sexuality.
Read more »