2018 Symposium on Worship and the Eastertide Gospel

The annual conference explored post-Easter texts to see what they tell us about discipleship and what it means “to serve a risen Savior” who, through us, is still in the world today.

Although the story of Jesus walking with two distraught disciples on the road to Emmaus is low-profile and less than 25 verses long, it tells of an epic journey.

Recounted in Luke 24:13-35, the story wouldn’t make a blockbuster movie or best-selling novel, but it does begin with despair and end with revelation and joy, said Leanne Van Dyk on Thursday, Jan. 25, in a worship service opening the 2018 Calvin Symposium on Worship.

In the story, two disciples are walking along the road when they meet a man they don’t recognize and tell him about how Jesus has been crucified. The man listens, shares Scripture with them, and the disciples only realize who he is after they sit down to eat and Jesus breaks bread with them.

“This may not be a literary classic,” said Van Dyk, president of Columbia Theological Seminary near Atlanta, Ga. “But look again, because in the ebb and flow of the ordinary moments . . . there is a dramatic turnaround on this most extraordinary day.”

The worship theme of this year’s symposium, which drew more than 1,500 participants from North America and around the world, was “Jesus Did Many Other Things as Well . . . : The Eastertide Gospel.”

There also were many seminars, workshops, plenary sessions, and times of worship that kept people busy crisscrossing the campus of Calvin College, Grand Rapids, Mich., for three days. 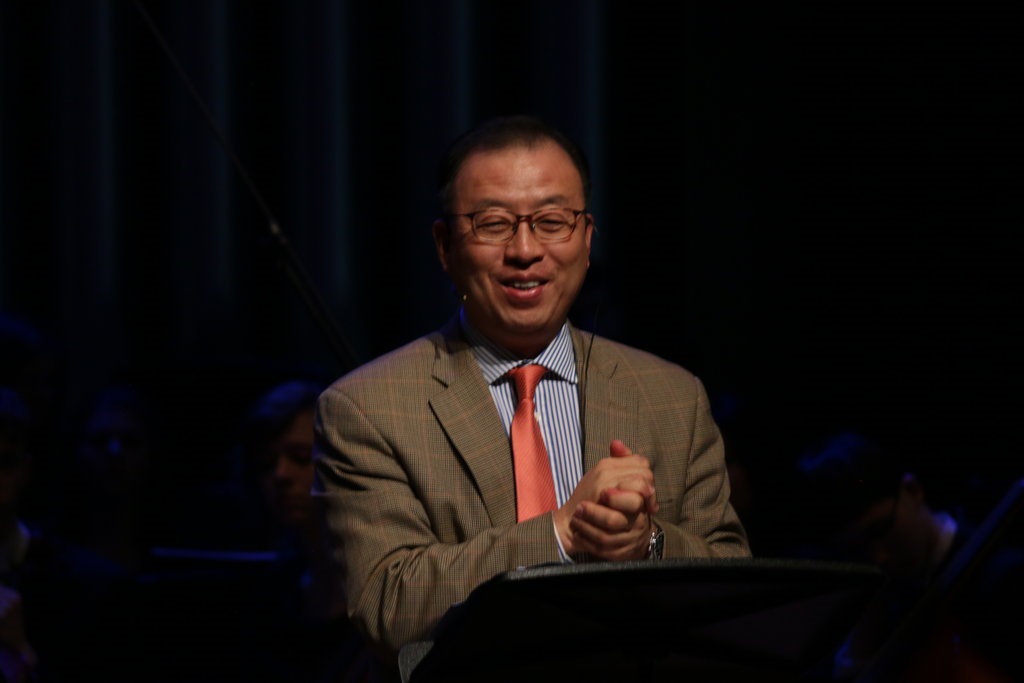 At another worship service that day, Paul C.H. Lim, a professor of church history at Vanderbilt Divinity School, Nashville, Tenn., preached in the Calvin Covenant Fine Arts Center. Lim preached on John 20:24-31, about the doubting disciple Thomas who touched the wounds of the risen Christ.

Reflecting further on the Emmaus road story, Van Dyk said there are few texts in Scripture that speak about what Jesus did and said in the 40 days after his death and leading to the Ascension.

But, noted Van Dyk, the scarcity of texts may itself provide an answer.

“Perhaps the message is that everything we need to know about Jesus and his work was revealed well before God validated it all by raising the Son from the dead,” she said.

In a significant way, the Emmaus road story reflects this point, showing that although Jesus may no longer be with us physically, his message is there and his disciples are called to understand it, make it their own, and share it with others.

“Jesus walks and talks with us, telling us we belong to him,” Van Dyk said. “In this story we can see how the good news makes for an epic journey of God’s persistence, love, and tender mercies.”

Worship and Lament over Charlottesville

Following the opening worship time, 15 seminars took place across the Calvin campus on topics ranging from “Training the Next Generation of Worship Leaders” to “Mental Health and the Practice of Christian Public Worship” and “Welcoming the Stranger” to “Singing Spirituals, Singing Gospel.” 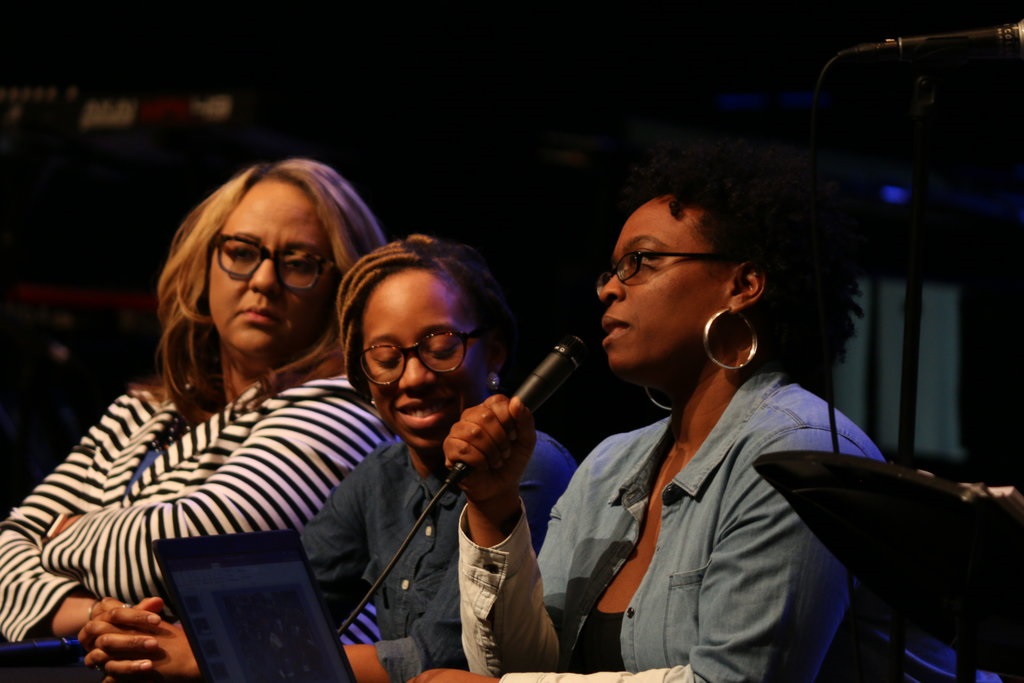 Another seminar, which drew more than 100 people to the Covenant Fine Arts Center auditorium, was “Bringing the Lessons of Charlottesville Home to Your Church.”

Focusing on the racial conflict that occurred in Charlottesville, Va., last August, that seminar featured a panel of participants who spoke about how the events of Aug. 11-12 affected them and their churches.

White supremacists held a “Unite the Right” rally on the evening of Aug. 11, carrying torches across the University of Virginia campus and threatening  a group of counter-protesting students.

The next morning, the white nationalists started to march to Emancipation Park in downtown Charlottesville, where they planned to protest the city’s plan to take down a statue of Confederate leader Gen. Robert E. Lee.

“I woke up Saturday morning. Things were quiet. But I couldn’t believe what happened the night before -- that this was actually happening in 2017,” said Isaac Wardell, worship director of Trinity Presbyterian Church in Charlottesville.

“There was a sunrise service on the downtown mall on Saturday. Otherwise, there was a strange, warlike quality in the air. No one was out jogging. But then the streets began filling up later in the morning,” he said.

Partnering with Mount Zion Missionary Baptist Church in town, Wardell’s church held a service at the same time as the rally. The rally soon became violent as white nationalists clashed with people counter-protesting their message of hate.

“One of the (anti-white supremacist) protesters came into the church during the service and told us there had been a murder,” said Wardell, referring to the incident in which a white nationalist drove his car into a group of protesters, killing one woman and injuring 19 others.

Others on the panel also recounted what they experienced that day. Charles Penny, a pastor in North Carolina, recalled how learning of the rally made him think of a family member who was lynched years ago.

“But even though that woman was killed at the rally, I can’t hate,” he said. “Jesus told us to bless those who persecute you.”

David M. Bailey, founder of a multicultural worship ministry in Richmond, Va., said that especially in times of conflict the church needs to be a place of safety and refuge for people who carry anger and trauma as a result of racism.

“In churches we need to have spaces of lament where people can deal with their emotions. . . . When it comes to showing an energy of love, it is a tall order, but we have to figure out how to do that in our worship practices,” said Bailey, whose ministry is affiliated with the Calvin Institute of Christian Worship (CICW), which put on the symposium. 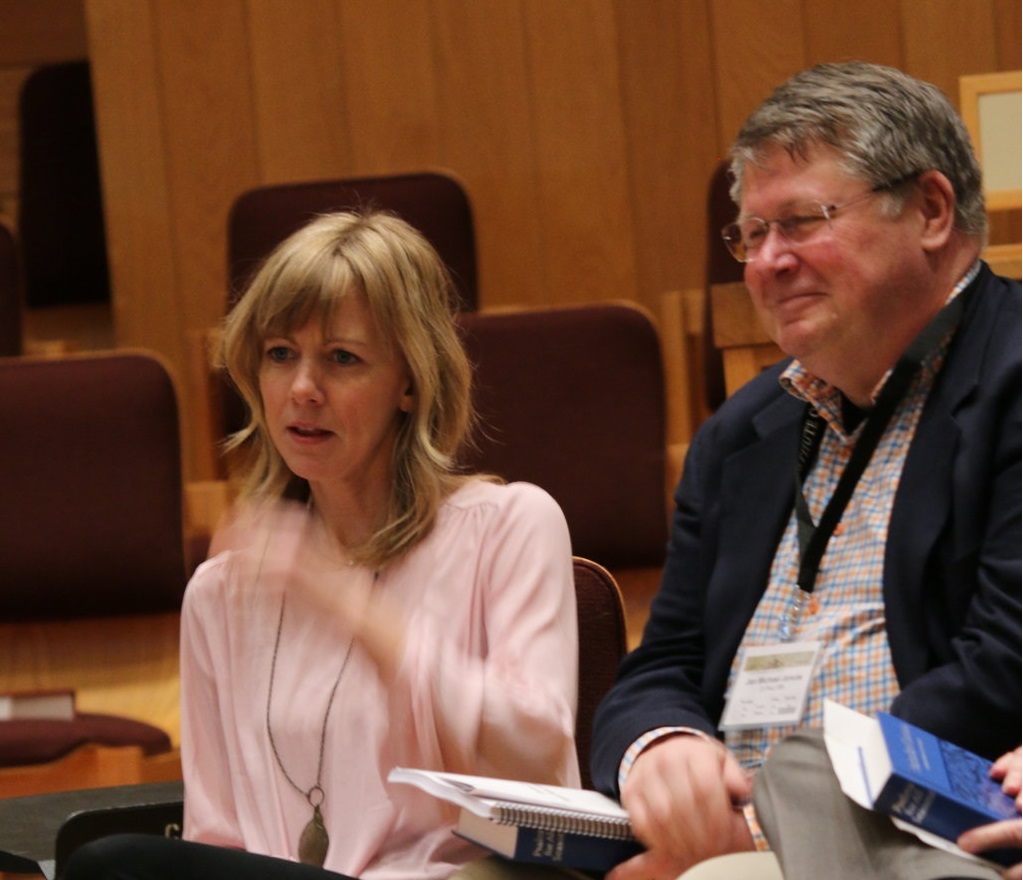 After lunch on Thursday, another 14 seminars took place, ranging from “Singing Psalms Together” to “Worship and Culture: Intense Global Learning for Essential Questions We All Engage.”

Taking place in the Upper Room at Calvin Theological Seminary was “Means of Grace: Forming New and Sustaining ‘Renewing’ Congregations and Church Plants.”

Including CRC church planters and leaders and an Orthodox priest, the panel for this seminar was moderated by Kevin Adams, senior pastor of Granite Springs CRC in Lincoln, Calif., and affiliated with CICW.

The focus of the discussion was mainly on ways in which panelists have woven the use of the sacraments of communion and baptism into the liturgies of their churches.

Eric Dirksen, founder and pastor of Christ Church of Davis in northern California, said his church holds communion every Sunday and people come forward to take the elements.
As they come forward, people often dip their hands in the baptismal font, which is close to the altar. Some have even crossed themselves before taking communion.

“We see the communion table as a place of connection to a larger community,” he said.

Augustin Hubert, pastor of Longview Community Church in Phoenix, Ariz., said his congregation is made up mostly of Hispanic members who don’t at this point seem ready for communion every week.

Chris Flesoras, pastor of St. Anna Greek Orthodox Church in Roseville, Calif., said communion or the Eucharist is at the heart of his faith.

With the Eucharist and other liturgical practices and prayers, said Flesoras, “we remind the community and all people that everything is sacred.

Called to ‘Do the Work’ 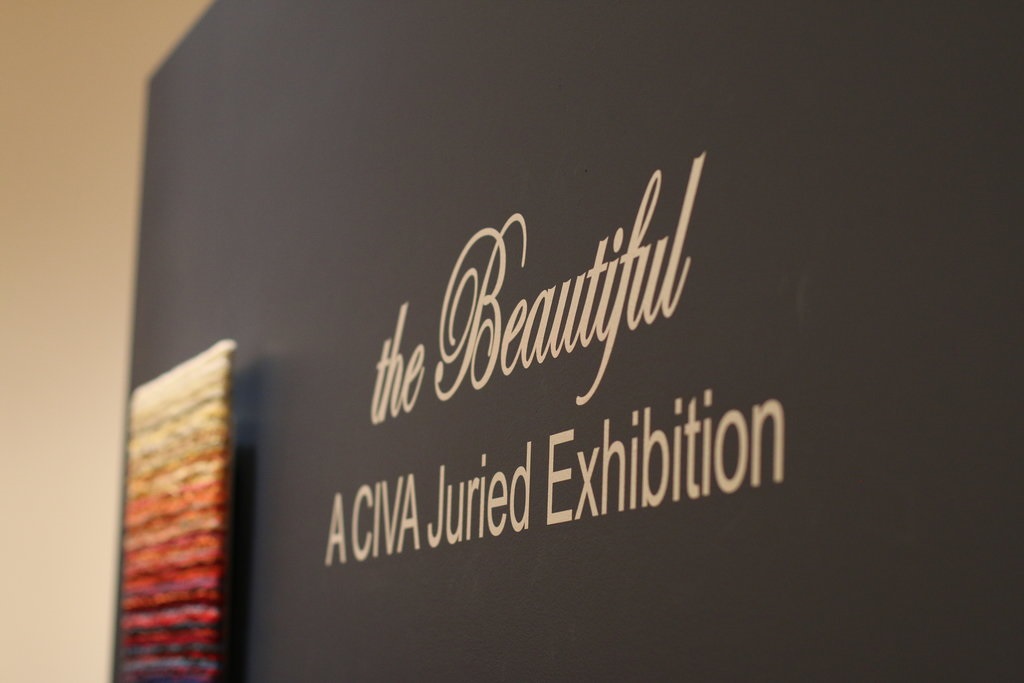 Throughout the symposium, participants had time to meet and talk together, browse a special display of art in a gallery in the Fine Arts Center, listen to plenary addresses, learn new songs from different cultures, reflect on the plight of refugees, pray for an end to racial tensions, and attend vesper and other services tied to the Easter theme.

By late afternoon on Saturday, people had gathered in the Fine Arts Center auditorium for the closing “Service of Word and Table,” officiated by Lisa M. Weaver.

Dressed in a white liturgical robe, the ordained American Baptist preacher and advisory member of the CICW Vital Worship Grants Program guided the congregation through prayers and songs leading up to her sermon and then communion.

Picking up on Leanne Van Dyk’s opening sermon about the Emmaus road, Weaver began by saying, “In the main, this story gives us a synopsis of the gospel according to Luke. . . . It is an epic story of faith rekindled.”

Like Van Dyk, she said it’s unclear why there aren’t more stories about the resurrected Jesus. But the reason for this, she suspects, comes in what Jesus himself said in John 14:12, “Very truly I tell you, whoever believes in me will do the works I have been doing, and they will do even greater things than these. . . .”

“Jesus has taught and modeled and dispatched his disciples to do the work. Jesus stepped back and assigned the Holy Spirit to his disciples.”

In coming to the communion table, she added, God’s people gain the strength to do the work of dismantling racism, fighting and curing diseases, ending war, educating people with few resources, making sure people have enough food to eat and clean water to drink. Stories of Indigenous Life
Join Cheryl Bear as she leads a vesper service at the 2018 Symposium on Worship.
Read more »