Come, Thou Fount of Every Blessing


The community (general public) is invited to join the Calvin Symposium on Worship conference participants in this evening of Christ-centered worship through the choral artistry of The Aeolians of Oakwood University. Established in 1946, The Aeolians perform choral music repertoire from the Baroque era to the 21st century, under the direction of Jason Max Ferdinand. They have collaborated with symphony orchestras to present masterpieces of Brahms, Mozart, Schoenberg, Dvorak, Hailstork, Verdi, Dett and many other renown composers. They have also performed and recorded with artists, such as Kathleen Battle, Angela Brown, Take 6, and Jacob Collier.

In early 2012, they performed in Moscow, Russia, and competed in the summer at the 7th World Choir Games and earned three gold medals, along with the championship in the Spirituals category. In 2017, they won the Choir of the World award at the Llangollen International Musical Festival, Wales, United Kingdom. In the summer of 2018, they won three gold medals at the 10th World Choir Games and the championship in both the University Choirs and the Spirituals categories. In 2019, they became the first historically black college/university (HBCU) choir to be selected from blind auditions to perform at the American Choral Directors Association (ACDA) national conference.

Please note: This ticket option is for the general public. Symposium on Worship attendees who register for Friday will have this festival service as a registration option. A limited number of seats will be released for sale during the Symposium registration process. 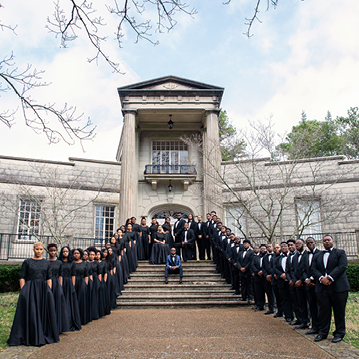